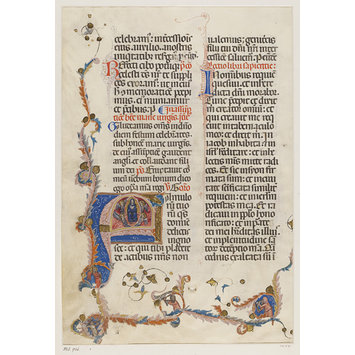 Leaf for the feast of the Assumption from a Missal

This leaf (cutting) is for the feast of the Assumption (15 August; when the Virgin Mary's body was assumed into Heaven after her death), and is from a mid-late 14th century Italian Missal (a service book containing the texts necessary for the performance of the Mass together with cermonial directions). The historiated initial 'F' (a letter containing an identifiable scene or figures, sometimes relating to the text) shows four angels lifting Mary, who sits enthroned, upward.

A leaf, from a Missal, that introduces the Mass for the feast of the Assumption of the Virgin Mary (15 August) probably made in Umbria in the mid-late 14th century. Double-sided. Written in black ink with red rubrics (a title, chapter heading, or instruction that is not strictly part of the text but helps to identify it). Colour pigments, gold leaf, and ink.

Recto: Two text columns with rubrics. One red initial 'R' with blue penwork (fine linear embellishment). One blue initial 'I' with red penwork. One historiated initial 'A' with colour pigments and burnished gold leaf (gold paint that has been polished to shine). Foliate marginalia (writing or decorations in the margins of a manuscript) in the left border with three small male figures enclosed in folaite circles.

This leaf is from an Italian Missal probably made in Umbria around the mid-late 14th century. The text (on both sides) is written in Southern Gothic Textualis script. The small size of the script and initials, and the lack of music suggests that this folio (a sheet of writing material; from the Latin for 'leaf') comes from a manuscript likley intended to be read from a closer distance, not fro futher away by a choir.

Initials
Recto: Pink initial 'A' accented with white and burnished gold leaf and mosaic gold. Set against a blue background, foliate marginalia decorates the ledt side and a small angels sits in the bottom left corner. Redinitial 'R' with blue penwork and blue initial 'I' with red penwork (one initial in each text column).

Decoration
Recto: Foliate marginalia runs along the left margin and fills the entire bas-de-page. Pink, orange, green acanthus leaves, accented with mosiac gold and burnished gold leaf, comprise the marginalia. In the bas-de-page are three male figures each encircled in a foliate medallion. Each figure wears a pink tunic, has a beard, holds a club, and wears a grey cap (likley intended to be the same figure).

Text
Recto: Introit (the choral song at the beginning of the Mass) for the Assumption of the Virgin: 'Gaudeamus omnes in Domino...'

Oratio (a set of invocative prayers) for the Assumptin of the Virgin: 'Famulorum...'

Reading from the Book of Wisdom (Libri Sapientiae) Ecclesiaticus 24: 11 - 18 (rest of the text continues on missing page): 'In omnibus requiem quaesivi...'

Leaf for the feast of the Assumption from a Missal; Italian; 14th century 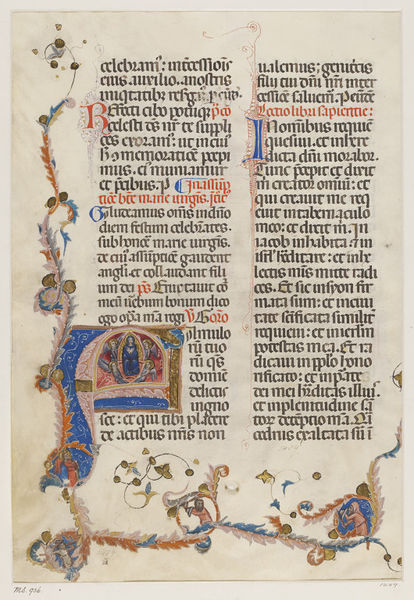