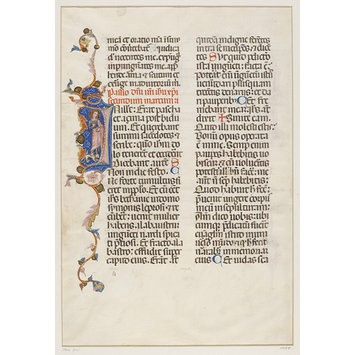 Leaf, from a Missal, that introduced a Mass celebrated during the Passion of Christ (during the week before Easter) probably made in Umbria, ca. mid-late 14th century. Double-sided. Text written in black ink with red rubrics (a title, chapter heading, or instruction that is not strictly part of the text but helps to identify it). Colour pigments, gold leaf, andf ink.

This leaf introduces the text from the Gospel of St. Mark (14:1), whcih is the first part of the history of the Passion of Christ; used during Holy Week (the week before Easter Sunday).

Two columns of text, written in Southern Gothic Textualis script, are separated with the historiated initial in the left margin. Winding marginalia (wirings or decorations in the margins of a manuscript) composed of foliate forms, painted in coloured pigments and burnished gold leaf (gold paint that has been polished to shine) descend and extend from the initial.

Recto: One historiated initial 'I' shows St. Mark standing beside the opening line of the text from his gospel. His right hand is raised in a blessing gesture as he looks out at the viewer. He stands atop a lion, which is his Evangelical symbol - this futher helps to identify him.

This leaf is from an Italian Missal probably made in Umbria around the mid-late 14th century. The text, on both sides, is written in Southern Gothic Textualis script. The small size of the script and initials, and the lack of music suggest that this folio comes from a manuscript likely intended to be read from a closer distance, not from further away by a choir.

Intials
Recto: Pink historiated initial 'I' accented with white filigree decoration is encased against a blue background that acts like a frame. Lush acanthus leaves curl and extend out from both the top and bottom of the initial. Burnished gold is used as decorative accents.

Leaf for a Mass during the Passion of Christ from a Missal; Italian 14th century. 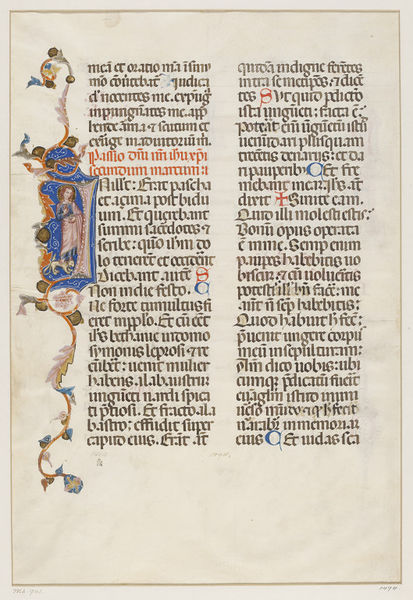