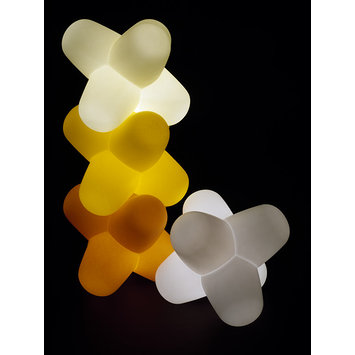 In the 1980s, Tom Dixon became known for his innovative furniture made of scrap metal welded together. In 1994, he founded the company Eurolounge to act as a platform for his new work with plastics. The 'Jack light' was the first product to be launched by Eurolounge.

Tom Dixon describes the Jack light as a 'sitting, stacking, lighting thing', emphasising its multi-purpose design. This also underlines that it is designed for handling and interaction. The form is more than a sculptural, free-standing light. It is strong enough to be sat on, but light enough to be lifted easily. Where more than one light is present, they can be stacked neatly. The soft, opalescent effect of the light filtering through the polyethylene is enhanced by the rounded edges and matt texture.

While exploring plastic moulding technology, Dixon discovered that rotational moulding was surprisingly cheap, low-tech and effective. This method, where polyethylene is spread around the inside of a spinning mould, is normally used for traffic bollards and street furniture. The technique enabled Dixon to manufacture multiples of the Jack light on an affordable commercial basis. The hard-wearing polyethylene made them very suitable for bar furniture. A German nightclub was furnished with seventy phosphorescent Jack lights. In Swindon Dixon collaborated with the lighting designer Jeremy Lord to create a tower of forty Jack lights, internally lit with changing colours.

The Jack light won the Millennium Mark Award for Great British Design in 1997.

The yellow, orange and phosphorescent Jacklights are from the first era of manufacture, when the forms were made in Somerset by Wyedale, a maker of agricultural machinery. The white Jacklight is an example made by Mailbox in Manchester, a larger producer of plastic goods. This later version has additional knob feet which prevent the plastic scratching, but which also determine a 'top' and 'bottom' to the form. The rough hole for the light fitting has also been refined.

Historical significance: Four jacklights (W.8, 9, 10, 11-1997) are innovative examples of leading edge contemporary British furniture design. The commercial success of this unusual design (1200 units in six months since launch) has been phenomenal.
For the last decade Tom Dixon has been recognised as one of Britain's most innovative and adventurous designers. Dixon has been a producer of his own designs, and has run a shop, Space, promoting his and other designers' work. Nevertheless, a number of his designs has been licenced for production by major international companies (for example Cappellini). He has influenced a younger generation of designers, particularly Michael Young, who was once an assistant in Dixon's studio. Since 1997 Dixon has been Head of Design for Habitat UK. He can be compared with Ron Arad: both designers have specialised in creating extraordinary furniture in their own studios, and have diversified into larger runs, or licences of their designs. Like Arad, it has been tempting to disregard some of Dixon's work as mere fashionable styling, but both men have been consistently innovative, influential, critically appreciated and commercially successful, and are now highly regarded designers. Both Dixon and Arad have found greatest commercial success with a design in plastic.

The origins of this design lie in a star-shaped paper lantern designed by Tom Dixon. The form of the Jacklight was developed on computer, and the plastic used to make it is the same as is used for traffic bollards. It was originally conceived as a lamp, and only during the design process was it realised the material and form were strong enough to be sat on.
Jacklights are intended for use in social and public areas, such as bars and nightclubs, which does not preclude domestic use. They are versatile and hardwearing, and combine the dual functions of lighting and seating. It is also possible to stack them. They are reminiscent of 1960s pop furniture, which appropriated geometric forms and man-made materials to suggest futuristic lifestyles. Their use also recalls the challenge to behaviour and conventions of the late 1960s 'new domestic landscape'. In Swindon Tom Dixon and Jeremy Lord (a lighting designer who has also worked with Michael Young) have created a column of forty Jacklights internally lit with changing colours, suggesting psychedelic design of the 1960s and 1970s. In Germany a nightclub is furnished with seventy phosphorescent Jacklights. 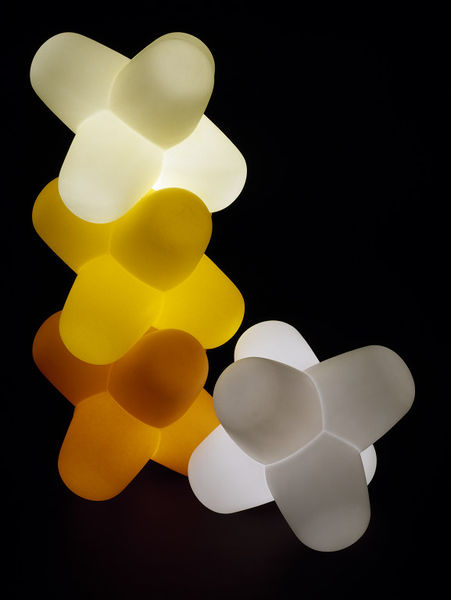