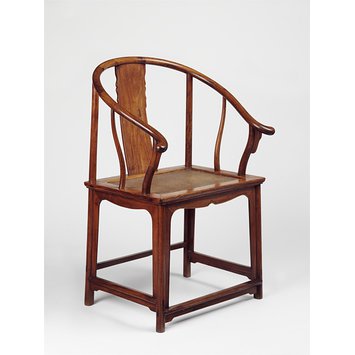 Fine furniture such as this chair belonged to the affluent households of scholar officials and prosperous merchants, both primary patrons of artists and artisans.
This round backed chair represents one major ‘family’ of classic Chinese furniture. Characterised by a continuously curved back and arm support, fixed into a rectangular seat, this style of chair is commonly referred to as ‘Quanli’, literally ‘round chair’ in modern Chinese. In western literature chairs of this type are often referred to as ‘horse shoe backed armchairs’.
They were used in a variety of domestic and official contexts. Graphic sources depict their most common usage in formal room settings such as reception rooms as well as for dining. For Ming connoisseurs the proper arrangement of furniture in a room was as important as the furniture itself.
Sources depicting the chairs in use, especially as dining chairs reveal this style of chair as a signifier of status; they were commonly used as seats of honour.
This style of chair could also be converted for use as sedan chairs with the addition of two carrying poles, inserted one each side under the seat and inside the legs of the chair.
The chair is made of Huanghuali wood often known just as huali (flowering pear) wood during the late Ming period. It is a hardwood with a lively grain and a lustrous finish when polished.
With fine hardwoods carpenters could create a polished finish, intricate joins and subtly shaped forms much more easily than with softer woods. Chinese carpenters evolved a variety of joints to fasten a piece of furniture together without nails or glue, often using pegs and holes also known as mortise and tenon joints. This allowed for relatively easy dis-assembly for transport, a great advantage when an official was transferred to another region or when carpenters were shipping pieces for sale in distant districts. It also allowed the furniture to expand and contract with variations in temperature and humidity without warping or splitting the wood.
These joints were routine mechanisms known to all craftsmen.

A hardwood armchair with a continuously curving back and arm rest, square matted seat, circular section legs and curved circular section side posts. Four stretchers are placed between the legs at varying heights, the front stretcher is set the lowest and functions as a foot rail.

The back splat and side posts are decorated with carved spandrels and the apron is similarly carved with a symmetrical curvilinear profile.

The chair is carved from a hardwood known as huali in Chinese. It is thought to be closely related in type to rosewood. The grain of the wood is particularly evident on the single curved back splat. It has been stained and polished.

The frame is formed of four carved circular section legs with four stretchers inserted between them, joined using an exposed mortise and tenon joint. A carved, mitred apron frames the legs on all four sides. The square seat is formed using a mitred mortise and tenon joint. Grooves on the inner edge of the frame work accept the floating mat covered panel which forms the seat, and tenons on the transverse brace fit into mortises on the front and back of the frame members to secure the seat on the underside.

The front legs and arm posts are not continuous, a feature which is often seen on chairs of this type. The arms are instead pulled back and enter the seat frame about 10 cm behind the legs. Some scholars consider that this 'pull-back' feature is characteristic of production from the early 18th century onwards, though this feature alone should not be used to determine the attribution date.

The single curving structure which forms the back and arms of the chair involves the precise joinery of five pieces of timber. The curvature of each piece is carefully determined by carving, not steaming, prior to joining. The sections are joined using a join known as a half lapped pressure peg joint, in western literature. The three middle sections are cut back at each end horizontally, across the diameter of the circle by approximately 3 cm in order to allow each piece to lap over the next. Each end is cut with a narrow ridge at one end and a corresponding groove at the other allowing each member to slot into the next. A rectangular wood pin is then inserted between each section to force them apart and increase the security of the joint. The two sections which form the end of each arm are only carved back at one end, where they join the sections which form the back rail.

The original seat was formed of soft rattan matting. This has now been replaced with a mat covered wooden board seat. The original matting may have been re-used for this purpose. The holes originally drilled for the soft matting seat are still visible on the underside. Small areas on the legs show evidence of minor repairs and fills.

Sophisticated joinery and good quality timber are essential to the creation of the flowing lines of this Chinese chair. The curved back appears seamless but actually consists of five jointed sections. Each section overlaps the next, with a tongue to prevent vertical movement. A square wooden peg inserted through both faces of the joint secures the tenons horizontally. [01/12/2012] 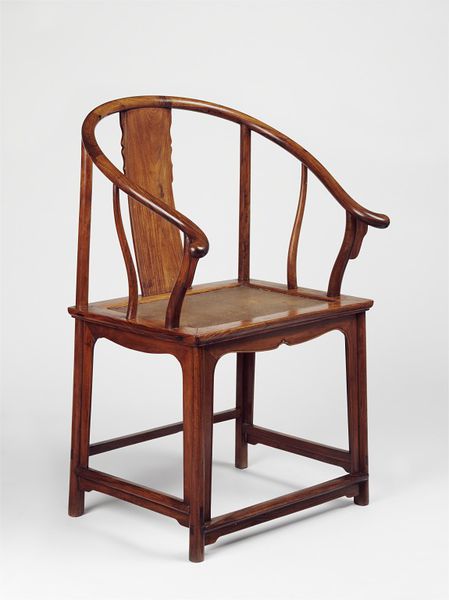