Nicolas Lancret (1690-1743) was born in Paris where he first trained as an engraver before becoming the apprentice of the history painter Pierre Dulin (1669–1748), and enrolled as a student at the Académie Royale de Peinture et de Sculpture. He later entered the workshop of the genre and decorative painter Claude Gillot (1673-1722), who had been Watteau’s master (1684-1721). He specialised in the genre of the fêtes galantes inaugurated by Watteau and decorative works for which enjoyed a considerable success.

This painting is a fine example of Lancret’s production of genre paintings showing elegant figures in an outdoor setting. The present picture shows two young ladies conversing with a man on a path in a landscape, the French title, Le berger indécis (‘the undecided shepherd’) evokes the amorous encounter that may follow this scene. Lancret’s genre scenes, influenced artists as diverse as François Boucher (1703-1770), William Hogarth (1697-1764) and Thomas Gainsborough (1727-1788).

In a landscape, on a path, two young ladies dressed in red, one on the left wearing a small red hat and a blue doublet, the other with flowers on her head, are conversing with a man seen from the back.

Bequeathed by John Jones, 1882
John Jones (1800-1882) was first in business as a tailor and army clothier in London 1825, and opened a branch in Dublin 1840. Often visited Ireland, travelled to Europe and particularly France. He retired in 1850, but retained an interest in his firm. Lived quietly at 95 Piccadilly from 1865 to his death in January 1882. After the Marquess of Hertford and his son Sir Richard Wallace, Jones was the principal collector in Britain of French 18th century fine and decorative arts. Jones bequeathed an important collection of French 18th-century furniture and porcelain to the V&A, and among the British watercolours and oil paintings he bequeathed to the V&A are subjects which reflect his interest in France.

Historical significance: This painting, entitled Le berger indécis (i.e. 'the undecided shepherd'), shows two ladies conversing with a young man on a path in a landscape. It was originally rectangular in format and later transformed in oval. It appears to be one of the four known versions of the same composition listed by Wildestein in his monograph on the artist: one was in the Dulac sale, 30 Nov 1778, no. 335, another in the Pembroke sale, 30 Jun 1862, no. 9 and a third one was formerly in A.M. Frank T. Sabin, possibly sold at Sotheby's London, 28 March 1979, lot 182. Yet another version, with the addition of a dog in the foreground, was in the Frey collection, Paris (Sale, Charpentier, 12-4 June 1933).
The composition was engraved by Ambroise Tardieu before 1841 and a preparatory drawing for the figure of the young man seen from the back appeared on the London art market in 2007 (Thomas Williams Fine Art Ltd). Lancret was a skilful draughtsman, and many drawings in red chalk, such as the present study, or the much-favoured 'trois crayons' technique have survived.
This painting is a fine example of 18th-century pastoral scenes, which present elegant figures in garden or wooded settings. These scenes, called 'fetes galantes' in French, constitute a genre inaugurated by Antoine Watteau at the beginning of the 18th century. They often include figures dressed in commedia dell'arte costumes and evoke a lascivious aristocratic world. Because of their intimate and often ambiguous subject matter, these pictures were also used as decorative compositions inserted in architectural structures or pieces of furniture.

Pastoral is a genre of painting whose subject is the idealized life of shepherds and shepherdesses set in an ideally beautiful and idyllic landscape. These scenes are reminiscent of the Arcadia, the Antique Golden Age that the Roman author Virgil (1St BC) described in the Eclogues and were at the time illustrated on the Roman wall paintings. The pastoral was reborn during the Renaissance, especially in Venice, in the oeuvre of such painters as Titian (ca. 1488-1576) and Giorgione (1477-1510), and gradually evolved over the centuries. In the 17th century in fact, the Arcadian themes were illustrated in the Roman school led by the painter Claude Lorrain (1604-1682) whereas a century later, Antoine Watteau (1684-1721) and his followers forged the new genre of fêtes galantes, which appears as a derivation of the pastoral. The pastoral became the hallmark of the Rococo movement in which François Boucher's (1703-1770) elegant eroticism found his true expression. This tradition, which had became an illustration of the carefree aristocratic world, died with the French revolution and was never revived although the celebration of the timeless Mediterranean world in the oeuvre of such painter as Henri Matisse (1869-1954) may be seen as a continuing interest for the theme.

Since overshadowed by his mentor Antoine Watteau, in his day the Parisian artist Nicolas Lancret was favoured by courts across Europe. He produced commissions for the apartments of Louis XV at Versailles, as well as numerous gifts for the King's friends and mistresses. His genre scenes, or paintings of everyday life, always told a story: an approach that influenced contemporary British artists such as William Hogarth and Francis Hayman. 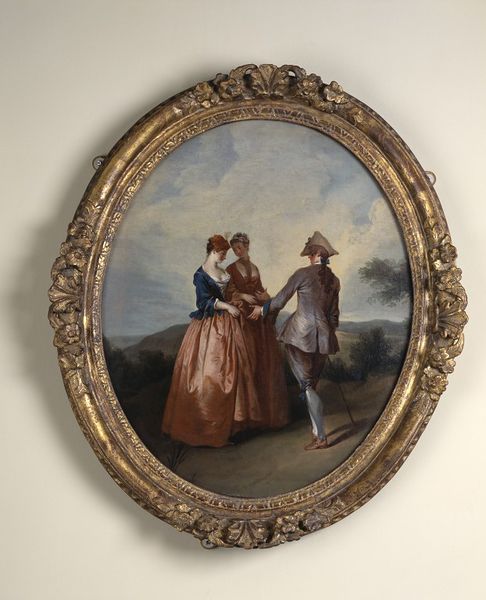