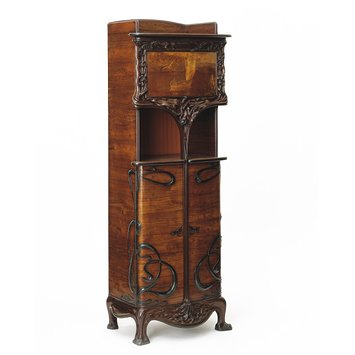 This cabinet was shown at the Exposition Universelle in Paris in 1900. It helped to establish Louis Majorelle as the leading maker of furniture in the fashionable Art Nouveau style. He had taken this up in about 1890, under the influence of another Nancy designer and cabinet-maker, Emile Gallé (1846-1904).

Plants and flowers inspired Majorelle's designs, and the stylised natural forms and whiplash curves decorating this cabinet are typical of his work. The unusual form, which has no real historical predecessor, helps to highlight the tree motif that grows from the base. Majorelle's family business in Nancy made a number of closely similar cabinets, usually for well-off midlle-class clients, and often as part of a suite of furniture. Another cabinet, of very similar overall form, is in the V&A collection, museum number 1997-1900.

In this design Majorelle specified a variety of woods, both home-grown and imported from tropical areas. The cabinet-makers cut them with great skill to exploit the visual effects of different grains and growth patterns.

A tall cabinet, in solid purpleheart, and veneers of kingwood on a carcase of oak, beech and softwood, built as a single unit but showing a lower cupboard with two doors, separated by an open recess, lined with pleated red silk, from a single-doored upper cupboard, the door of this set with a panel of marquetry in several woods, both European and tropical, forming a scene of a man sailing a small boat on a river. The cabinet is set on the sides and lower front with patinated wrought-iron mounts.

Design
The cabinet is veneered in rosewood, in narrow sections, with the grain set horizontally. The doors of the lower cupboard are veneered on the front and back in rosewood, with the edges veneered in purpleheart. The front corners of the cabinet are set with wrought-iron mounts of sinuous scrolls which extend a considerable way onto the sides and the doors of the cabinet. A motif of a dragonfly in wrought-iron is set close to each keyhole on the lower doors, the tail of each dragonfly curved round the keyhole. All the mounts are painted black.

The door of the upper cupboard is set with a marquetry picture of a man sailing a small boat on a river, with gulls to the left and sedges and water plants in the right, lower, corner, and a far bank with trees behind. The veneers used include burr elm, maple, burr maple, palm, different varieties of oak, walnut and macasser ebony.

The back of the recessed centre section is lined with pleated red silk.

Construction
The cabinet is built on a low base with rails of oak (back rail) and beech (front and side rails) tenoned into the tall feet of solid purpleheart, the rails with wide facings of purpleheart, the base with curved sides and front. The top of the frame is inset with a panel of softwood, veneered with rosewood, set with the grain running laterally. The panel, which forms the bottom of the lower cupboard, is countersunk to leave 1 cm of the inner edge of the top of the frame visible when the doors are opened.

The sides of the cabinet are tenoned down into the top of the side rails of the base. They are held together and stabilized by the top of the lower cupboard which is shaped with a curving front, mirroring the shaping on the front of the base and extending approximately 6.3 cm beyond the body of the cabinet. This wraps round the front of each side, and slides from the front into rebates cut in the inner face of each side and into shorter rebates cut only on the front edge of outer faces.

A central upright of purpleheart, at the front of the lower cupboard, is tenoned down into the top of the base frame. It runs up through the top of the lower cupboard in a rebate and is tenoned at the top into the bottom of the front frame of the upper cupboard. This frame, also of purpleheart, is constructed like a picture frame, with lap-jointed, mitred corners. It is presumably attached to the front edge of the sides of the cabinet with loose tenons or dowels, although no jointing is visible. On top of this frame is a cornice section, presumably also glued and tenoned or dowelled to the top of the upper element of the frame. This section is shaped so that its outer edges protrude beyond the sides and its back face is cut out to sit within a rebate in the sides, in the same way as the top of the lower cupboard, forming an upper layer that locks the sides together. The top shelf of the cabinet, forming the top of the upper cupboard, is set just below the top of the cornice section and behind it. It is rebated into both sides of the cabinet and was inserted from the back. Above it the sides rise approximately 7 cm higher, forming a gallery with a back panel. This is rebated into the inner edge of each side at the back and into the top, back edge of the top shelf and is fixed from the back with screws (one screw on each side and four equidistant screws along the line of the top shelf).

The two doors to the lower cupboard are curved in plan, the outer edges curved more tightly to meet the front edges of the sides of the cabinet. The doors are veneered on all surfaces, so it is impossible to see whether the carcases are carved in the solid or built up in sections; the thickness of the doors suggests that bending of the timber was not an option. Each door is set with a continuous hinge similar to a piano hinge, in sections, but in only two short sections on each does the cylindrical covering for the central pin extend into plates screwed to the doors and the sides of the cabinet. The doors lock separately to the centre upright but they give access to a single space, fitted with two shelves, each resting on two narrow fillets of rosewood screwed into the sides of the cabinet.
The upper cupboard has a single door, hinged to the right, with pin hinges. It is not shelved.

The back panels of both cupboards are of frame and panel construction, with oak frames and panels. These are rebated into the sides and the elements forming a top and bottom rail to each cupboard. They were slid into place, the upper one from above, before the top was fixed, the lower probably also from above before the back panel of the centre section was fixed. The back of the central, open section, which is not framed, was screwed into place before the top of the lower section, with its clamping action, was put in place.

Veneered in kingwood, with marquetry panel in birch, elm, oak, zebrano, rosewood, padouk and other woods, on an oak and possibly mahogany carcase, with wrought iron mounts; the low stand and framing to the upper sections in carved purpleheart

Given to the Victoria and Albert Museum in 1900, with a large collection of Art Nouveau furniture purchased from the Exposition Universelle in Paris, by Mr (from 1904 Sir) George Donaldson (1845-1925), a dealer and advisor to the Museum

This large gift of furniture received a controversial reception from influential public figures. The architect C F A Voysey (1857-1941) voiced the opinion of those grounded in the Arts and Crafts Movement, when he wrote in 'L'Art Nouveau: What is it and What is Thought of It, A Symposium' - I, in Magazine of Art (new series), vol. II (1904), pp. 211-12 that Art Nouveau was 'distinctly unhealthy and revolting.... we have gone back to savagery on being emancipated from tradition.' The whole discussion even came to the letters pages of The Times and the Museum, which had been keen to accept Donaldson's gift, hastily issued notes to art teachers who might use the collection, pointing out that 'It is..necessary that students inspecting the examples in this collection should be guided, in forming an opinion as to their merits and obvious faults, by instructors who have given attention to such subjects as Historic Ornament, Principles of Ornament, and Architecture.'

The collection given by Donaldson was exhibited with the modern collections at the branch museum at Bethnal Green (now the Museum of Childhood). Interest in it revived post-war, but it was not until 1987 that pieces were displayed again at South Kensington (in Gallery 8, in the dispaly of Art and Design in Europe and America, 1800-1900, in which this cabinet was shown). The controversy caused the V&A to stop collecting contemporary material (with very few exceptions) until after the Second World War.

A tall cabinet, in solid purpleheart, and veneers of kingwood on a carcase of oak, beech and softwood, built as a single unit but showing a lower cupboard with two doors, separated by an open recess, lined with pleated red silk, from a single-doored upper cupboard, the door of this set with a panel of marquetry in several woods, both European and tropical, forming a scene of a man sailing a small boat on a river. The cabinet is set on the sides and lower front with patinated wrought-iron mounts.

Signed 'L. Majorelle Nancy' this cabinet was shown at the Paris 1900 Exhibition. Its combination of pictorial marquetry and naturalistic carving reflects the influence of Emile Gallé (1846-1904), the leader of the École de Nancy.

Exhibited at the Exposition Universelle, Paris 1900

In 1900 Majorelle’s Art Nouveau cabinets were innovative in form and shocking in style. Compared to the sinuous carving and curved ironwork, the veneering of the lower doors may seem plain, and the marquetry picture static. However, the horizontal figure of the kingwood door veneers can be read as ripples of slow moving water, subtly unifying the whole design. [01/12/2012] 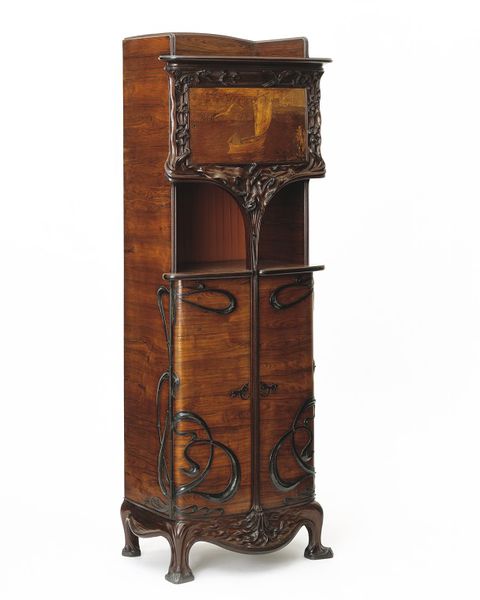