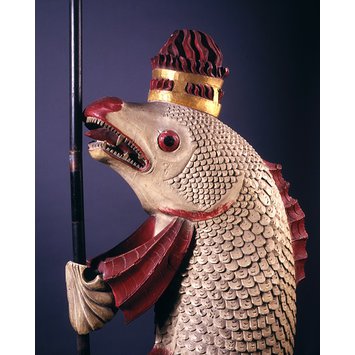 Object Type
The figure of a dolphin holding a banner, forms part of a group which, together with bull, ram and griffin, are known as the Dacre Beasts. The banner bears the medieval arms of the Greystoke family, which are represented by 'three cushions d'argent' (three silver-coloured diamonds). The Dacre Beasts are rare survivors of a tradition of heraldic ornament. They represent one of the most powerful families in northern England and are a unique survivors of free standing, large-scale wooden heraldic sculpture from the English Renaissance.

People
Elizabeth de Greystoke (1477-1516) was Thomas Lord Dacre's wife. The Dacres were one of the most powerful families in northern England during the Middle Ages.

Places
Naworth Castle, Brampton, Cumbria, was a family seat of the Dacre family from 1317 until 1577, when the Castle became the property of Lord William Howard through marriage to Elizabeth Dacre. Dacre Beasts have stood in the Hall at Naworth Castle since the early 16th century.

Materials & Making
The Dacre Beasts were probably made by unnamed local craftsmen from a single, large oak grown on the estate.

Additional Information
The Dacre Beasts were repainted in 1849 after the fire at Naworth in 1844. The poles and coats of arms held by the beasts date from the mid-19th century.

Carved, painted and gilded oak figure of a dolphin, bearing the medieval arms of the Greystoke family.

Accepted in lieu of inheritance tax by H M Government and allocated to the Victoria and Albert Museum; with additional funding from the Friends of the V&A, the National Heritage Memorial Fund, The Art Fund, Mr Ralph Brocklebank, and the Old Possum's Practical Trust

The Dacre Beasts were commissioned by Lord Thomas Dacre (1467-1525) in about 1520 and were displayed in the rebuilt hall at Naworth Castle, Cumbria. He was a formidable soldier who fought on the side of Henry Tudor against Richard III at the Battle of Bosworth and with the Earl of Surrey against the French and the Scots at the Battle of Flodden in 1513. Lord Dacre's prowess was epithomized by the battle cry "a read bull, a read bull, a Dacre, a Dacre". The crowned dolphin is the supporter of the Greystoke coat of arms. In 1488 Lord Dacre eloped with Elizabeth Greystoke (1471-1516), the heiress to the baronies of Greystoke and Fitzwilliam. Through his marriage Lord Dacre acquired Morpeth Castle and the manor of Henderskelfe, later rebuilt as Castle Howard. In 1577 Lord William Howard, son of the third Duke of Norfolk, married Elizabeth Dacre and the Dacre properties have descended in the Howard family. The barony of Gilsland was acquired through Ranulp de Dacre's marriage to Margaret de Multon in 1317. Ranulph de Dacre received a licence to crenellate Naworth in 1335. The beasts thus demonstrate the antiquity of the Dacres-one of the most powerfu Northern families-and the importance of two dynastic marriages.
They were probably made by local craftsmen from oak grown on the estate, although the names of the carvers and painters have not been recorded. Their design is derived from contemporary grants of arms to the Dacre, de Multon and Greystoke families. Dendrochronological analysis recently demonstrated that the single trunk of oak from which all four beasts were carved was felled between 1499 and 1549. Testing of the polychrome decoration has revealed at least three successive paintings on the Bull, the Ram and the Dolphin. Samples from the earliest decoration contain pigments available in the first quarter of the 16th century and are likely to form part of the original decoration. The Dacre Beasts have remained in the hall at Naworth since early 16th century.
The present decoration dates from the 1840s and was executed after the fire at Naworth of 1844. The staves and coats of arms held by the beasts also date from the mid-19th century. The present appearance of the Dacre Beasts reflects mid-19th century antiquarian interest. They were rescued from a major fire at Naworth in 1844, and restored in 1849 under the careful supervision of the Victorian architect Anthony Salvin (1799-1844) who wanted the new work to marry as closely as possible with the old. Repainting of the Dacre Beasts was done by a Mr Wilkinson.

Historical significance: The Dacre heraldic beasts are unique national survivors of free standing large-scale wooden heraldic sculpture from the English Renaissance. Although there is both written and pictorial evidence for contemporary Royal Beasts, the Dacre Beasts are apparently the only recorded surviving heraldic beasts representing a noble family. They are also of considerable regional interest as they represent one of the most powerful families in Northern England. These heraldic sculptures demonstrate the primitive nature of British art in the early 16th century before the impact of the Italian Renaissance later in the reign of Henry VIII.

The crowned dolphin figure comes from the coat of arms of the Greystoke family. Elizabeth de Greystoke, an heiress, eloped with Thomas, Lord Dacre in 1488. There has been much debate as to whether the creature represents a salmon or a dolphin. We use ‘Dolphin’ on the basis that the Greystoke ‘Dolphin’ is mentioned as such in Smith’s Ordonnances in 1599. There is no grant of supporters in evidence for the 1st Earl of Carlisle, whose title was created in 1661. (Information supplied by Thomas Woodcock, Garter King of Arms to Dr Tessa Murdoch c2003). An eyewitness account of the Naworth fire of 1844 also refers to it as a dolphin.

The Dacre Beasts have been acquired by the Victoria and Albert Museum with generous grants from the National Heritage Memorial Fund, the National Art Collections Fund, the Friends of the V&A and Old Possum's Practical Trust. They will be displayed at the entrance to the new British Galleries which open in November 2001.

The Victoria and Albert Museum is still seeking sponsorship for these new galleries. Please contact Lucy Morrison in the Development Office for further details. [07/2000]
The Dacre Beasts

These beasts appear to be unique survivors of English heraldic woodwork at the time of Henry VIII, although it is not now clear why they were made. They take their name from Thomas, Lord Dacre (1467-1525) and come from the hall of his castle at Naworth, Cumbria. The Beasts escaped damage in a disastrous fire in 1844, but were repainted shortly afterwards, perhaps following the original colour schemes.

The Dacre Beasts will be included in the new British Galleries opening in November 2001.

Acquired with generous grants from the National Heritage Memorial Fund, The Friends of the Victoria and Albert Museum, two private benefactors and the National Art Collections Fund, an independent charity. [19/04/2001]
British Galleries:
The Dacre Beasts

These figures appear to be unique survivors of English heraldic woodwork made in the reign of Henry VIII (1509-1547), although it is not now clear why they were made. They take their name from Thomas, Lord Dacre (1467-1525), of Naworth Castle, Cumbria, where they remained until recently. The beasts escaped damage in a disastrous fire at Naworth in 1844, but were repainted shortly afterwards, perhaps following the original colours.

These beasts were supporters, the creatures that appear on either side of an armorial shield. Each relates to a branch of the Dacre family or to families with which they were related through marriage. The red bull was a supporter of the arms of Thomas, Lord Dacre himself. [27/03/2003]
The Dacre Beasts
About 1520

The bull, dolphin, griffin and ram represent the heraldry of members of the Dacre family. They would have stood in the great hall of one of the family castles in Cumbria to proclaim the Dacres' high status.

V&A: W.6 to 9-2000. Purchased with the assistance of the National Art Collections Fund
Cat. 156 [2003]
Treasures of the Royal Courts: Tudors, Stuarts and the Russian Tsars label text:

The crowned dolphin figure comes from the coat
of arms of the Greystoke family. Elizabeth de
Greystoke, an heiress, eloped with Thomas, Lord
Dacre in 1488. The Dacres were one of the most
powerful families in northern England during the
late medieval period. They were also ancestors
of Charles Howard, 1st Earl of Carlisle, Charles II’s
ambassador to Muscovy.

In front of you are four wooden crests, the Dacre Beasts; from left to right, a red bull, a black griffin, a white ram and a crowned dolphin. The figures represent the dynastic alliances that made the Dacres one of the most influential families in the North West of England. They were made for Thomas, Lord Dacre, born in 1467, died 1525. In 1513 he led the English armies at the Battle of Flodden in Northumbria, near the Scottish border, a decisive victory against the Scots. The beasts may have stood guard at Lord Dacre’s funeral in 1525 at Llanercost Priory: normally they were found in the Great Hall at the Dacre family home, first probably at Kirkoswald, and later Naworth, near Carlisle, Cumbria. They stood under a ceiling painted with portraits of the Kings of England, a physical demonstration of the Dacre family’s loyalty to the crown. Naworth later became the home of the Howard family because Elizabeth Dacre, heiress of Naworth, married Lord William Howard, third son of the Duke of Norfolk, in 1577.

A fire in 1844, during the time of the 8th Earl of Carlisle, a descendant of the Howard family, destroyed the hall. Fortunately the beasts were rescued. After the fire, the Beasts were repainted in Victorian colours to imitate the original sixteenth century tinctures (the term used for heraldic colours). This was under the supervision of the Victorian architect Anthony Salvin, responsible for the restoration of Naworth

The gilding of the Dacre Bull’s pizzle horrified a Christian visitor, accompanied by ladies, on a visit to Naworth shortly after: ‘…so obscene a representation exceeds anything in the worst idolatrous temple in heathen lands….Had the Decorator confined himself to gilding the Collar & Horns …he would have shown a purer taste and been more in Conformity with the Engraving of the Arms.’. In fact, the gilding of the Bull’s pizzle, or private parts,[was heraldically appropriate: the Dacre Beasts represent the ancient lineage of the Dacre and Howard families; symbols of fertility were central to both families’ authority.

The Dacre Griffin was actually the inspiration for the Gryphon in Lewis Carroll’s children’s novel ‘Alice in Wonderland’. The Gryphon is ordered by the Queen of Hearts to take Alice to meet the Mock Turtle. The book’s illustrator, Tenniel, was invited to stay at Naworth by the aristic 9th Earl of Carlisle and would have seen the beast during his stay there.
[]

Probably made 1507-1525; the banners added about 1844. There is a suggestion the beasts might have come from Kirkoswald, Cumbria. 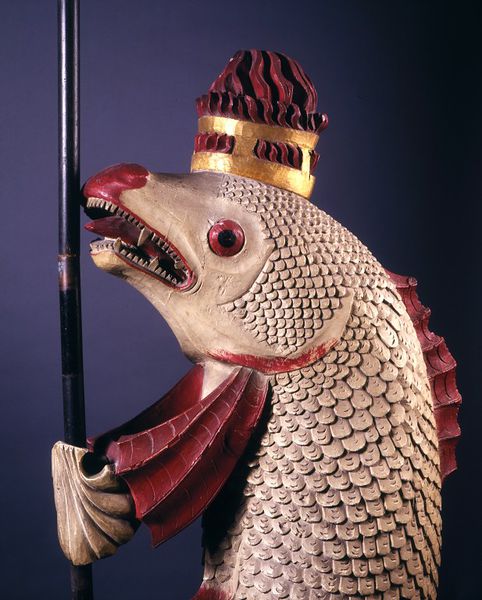