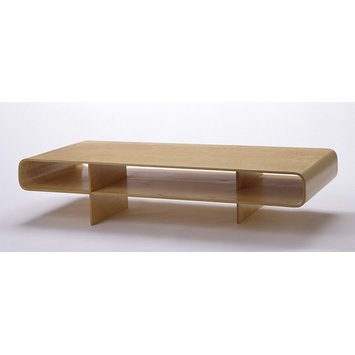 Edward Barber and Jay Osgerby formed their design partnership when they left the Royal College of Art, London, in 1994. Their first commission was the interior of a bar in South Kensington, but the client could not afford to develop the table they designed for it. Instead, they developed the table with the West London firm of Windmill Furniture, a specialist manufacturer of plywood furniture. Windmill Furniture is known for its re-issues of 1930s modernist designs by Marcel Breuer and others, originally produced by Isokon. This table has an immediate affinity to modernist design, with clear, uninterrupted lines and a restrained use of materials. Launched by Windmill Furniture in 1996, the Loop table rapidly gained critical attention at trade exhibitions in New York and London. The leading Italian design entrepreneur of the period, Giulio Cappellini, added it to the Cappellini catalogue in 1997 and subsequently developed a family of furniture with Barber Osgerby that shared the same plywood loop construction.

The table is formed from two broad U shapes of 7-ply birch plywood that were pressed together in a mould to form a continuous 'loop'. The join at the sides is exceptionally fine and barely visible.

Two legs are formed by slotting two boards of 7-ply into the body of the table from opposing sides. Each vertical board runs almost the full depth of the piece but ends 220 mm short of the edge to which it is leading. Each board thus bisects the space it enters, creating two compartments, one 350 mm wide, the other 965 mm. The scheme is elegantly symmetrical, one side forming a mirror image of the other.

The entire piece is coated in a clear varnish.

LOOP / BARBER OSGERBY / MADE IN ENGLAND BY WINDMILL FURNITURE
Label; English; underside of the base; 1999

The Loop table was the first deign of design duo Edward Barber and Jay Osgerby. The table was designed in connection with a commission for a restaurant interior in South Kensington, London. However, the budget for the project did not allow for the table to be realised hence the designers developed the table together with the West London manufacturer Windmill Furniture, launching it in 1996. The table appears as a continuos strip of plywood but was in fact made of two shallow conjoined 'U's. It won the designers a 'Best New Designers' award at the International Contemporary Furniture Fair in New York in 1997 and was included by the designers on the stand they designed for Wallpaper magazine at the 100% Design fair the same year. At the latter, the Italian furniture entrepreneur, Giulio Cappellini saw the table which started a collaboration resulting in an series of Loop furniture including a desk, shelf (W.3-2000) bench and chaise long.
The Loop range is typical of a style of furniture which has become synonymous with 1990s loft living; simple, functional, elegant and light.
The table was available only in birch plywood for the first eighteen months of production. At this juncture, two other choices were added to the range: a dark, figured walnut veneer and also a white paint finish. Hence the designer, Ed Barber, thought that the birch type was the most appropriate of the three versions for the Museum to acquire.

Windmill Furniture's main business is custom-made contract furniture. However, the West London company run by Chris and Lone McCourt, launched a new venture in the 1990s, called Isokon Plus, to manufacture iconic pieces from the 1930s Isokon Furniture Company range. Isokon Plus also collaborates on pieces by contemporary designers, starting off with Barber Osgerby Associates. The Loop coffee table is one such product of this fruitful collaboration.

BOA continues the tradition of modernist plywood furniture established by Isokon in Britain in the 1930s. In 1999 Windmill Furniture launched Isokon Plus to market re-edition Isokon furniture. They also produce a range of contemporary designs in plywood including the loop table, shelf and flight stool on display in this bay.

BOA continues the tradition of modernist plywood furniture established by Isokon in Britain in the 1930s. In 1999 Windmill Furniture launched Isokon Plus to market re-editioned Isokon furniture.