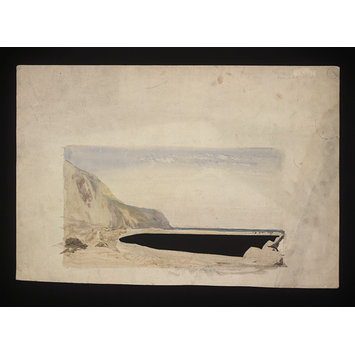 Preliminary design for Acis and Galatea, showing a high coast to the left and a sweeping bay stretching across the centre to the right with a beach downstage. The sea represented by a cut with glue residue at the edges, suggesting that there was formerly an attached mica or talc overlay transparency. The whole set in a pencilled frame. There is a circular maker's stamp in the upper right hand corner of the card.

Water-colour and gouache over pencil on thin card

Clarkson Stanfield had two children by his first marriage and ten by his second to Rebecca Adcock (d.1876). The theatre designs, S.13 - S.99-2000, and other Stanfield studio residue passed to the oldest surviving son of the second marriage, George Clarkson Stanfield (1828-78), also a painter. He died of liver disease at the Hampstead home of his sister, Harriet Thesesa (1837-1911). In 1861 Harriet had married William Henry Gunning Bagshaw (1825-1901), a barrister, QC and judge, and the couple had a large family, of whom the fifth child, Joseph John Richard Bagshawe (1870-1909), was also a professional artist. Joseph married in 1901 and had two sons, Edward and K.G.R., the latter becoming a solicitor in the firm of Seaton, Gray, Bell and Bagshawe at Whitby. The collection of Clarkson Stanfield designs (S.13 - S.99-2000) was discovered in K.G.R. Bagshawe's attic on the latter's death. It had presumably been left with his grandmother, Harriet, on George Stanfield's death and been passed down through the family. K.G.R.'s daughter, Susie, took the designs to Christie's for a probate valuation, and Christie's alerted Dr Pieter van der Merwe of the National Maritime Museum, an acknowledged expect on Clarkson Stanfield. Dr van der Merwe then contacted the Theatre Museum. The collection comprises working designs and model pieces made in the Drury Lane scene room from the mid-1820s to the mid-1840s.

This design was made for George Frideric Handel's serenata, Acis and Galatea, staged by William Charles Macready at Drury Lane Theatre, 5 February 1842, and shows the 'breaking waves' moonlight scene revealed on the rising of the curtain. The scene contained one of Stanfield's most famous effects, a 'rolling wave' which mechanically created the impression of the sea breaking on the beach and then receding. The production was restaged by George Vining at the Princess's Theatre on 2 August 1869, using the same designs which were lent by Clarkson Stanfield's family.

Preliminary design by Clarkson Stanfield for the opening of Acis and Galatea, Drury Lane Theatre, 1842 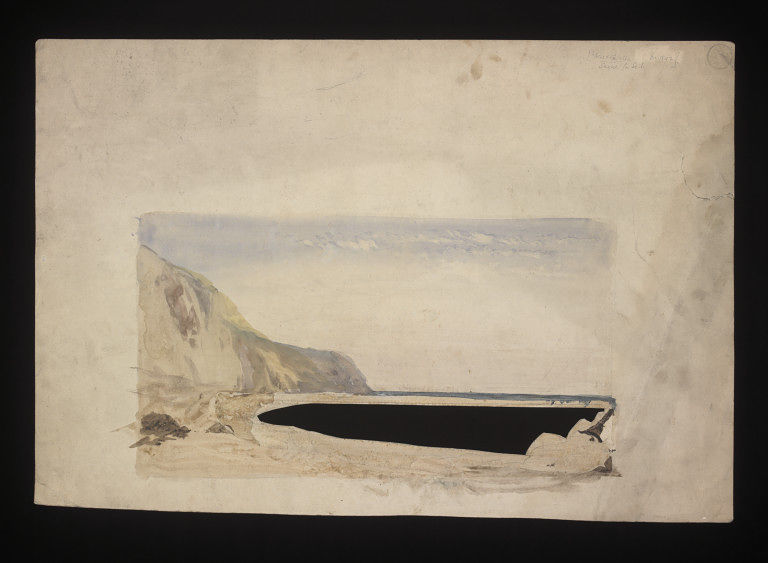