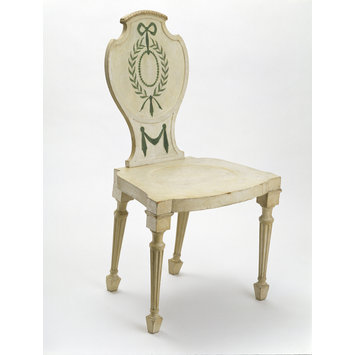 This is one of a set of four chairs made for the hall at the villa in Hampton, Middlesex, that belonged to the celebrated actor-manager David Garrick (1717–1779). Hall chairs were typically made of solid wood, and painted in whole or in part – usually showing the owner’s coat of arms on the back. But Garrick, who did not have a coat of arms, has instead used ribbons and beads surrounded by a triumphal laurel wreath, doubtless alluding to his own ‘triumph’ in the theatre.

The chairs were almost certainly made by Thomas Chippendale, whom Garrick commissioned to furnish his Hampton villa in the 1760s and 1770s, and whose reputation, like Garrick’s, has long outlived him.

Hall-chair of willow, carved and painted white and green. Cartouche-shaped back, narrowing towards the bottom, with a curved guilloche moulding along the top. The larger hollowed-out panel is painted with ribbons, a garland and a wreath, the smaller one below it with a swag of drapery. The seat, inward-curving towards the back and with square corners, has a circular indentation in the middle. Round, fluted legs, terminating in spade feet, square at the junction with the seat rail.

Wood(s) need checking; in all recorded V&A publications and labels the chairs are said to be made of birch, but Christopher Gilbert identifies the wood as willow. In the caption to his fig. 155 he describes the 'frame' (i.e. presumably the whole) as willow, but on p. 240 he says that they have 'willow seats', allowing for the possibility that both woods are used, in different parts of the chair.

The chair is part of a pair at the museum (with W.32-1937), originally from a set of four. The chairs are from David Garrick’s villa at Hampton, Middlesex and are included in an inventory taken of the house in 1779. The chairs were then sold in 1864 to Mr. H.E. Trevor, along with a suite of bedroom furniture, which the museum acquired in 1937. The chairs were bought through Mr. Charles J. Sawyer of 12 Grafton Street, London, for £42 in total. As is the case with suite of bedroom furniture, the chairs were most likely supplied by Thomas Chippendale.

Carved and painted willow hall chair, the back painted with a laurel wreath, in green on a white ground. chair, English 1772-8, supplied by Thomas Chippendale for Garrick's villa

Christopher Gilbert, The Life and Work of Thomas Chippendale (London: Studio Vista/Christie's), Vol. I (text), p. 140; Vol. II (plates), fig. 155
David Jones, The Paxton Style, 'Neat and Substantially Good': Thomas Chippendale's Scottish Achievement (published by Paxton House in 2018, to accompany an exhibition of the same title to which the chair was lent), no. 17, pp. 74-5.

This is one of four chairs recorded as being in the hall of David Garrick's villa in an inventory taken in 1779. The hall was painted stone colour, a standard colour for halls. They were seen as a threshold between the exterior and interior and the furnishings were usually sparse.
Given by Mr H.E. Trevor with the support of some admirers of David Garrick
Museum No. W32-1937
(note: this is incorrect they were not a gift but a purchase.) [1996]
HALL CHAIR
ENGLISH; about 1775
Painted birchwood
From David Garrick's villa at Hampton.

W.32&33-1937 are attributed to Thomas Chippendale by loose analogy with hall chairs at Nostell Priory and Harewood House, made by his firm, and on the grounds of their provenance from Garrick's villa at Hampton, where Chippendale was engaged from before 1768 to at least 1778. The chairs are not mentioned in Chippendale's bills of 1768--69, and on stylistic grounds can be ascribed to the latter part of his decade of employment by Garrick. The set of four were inventoried at the villa on 1 March 1779, a few weeks after Garrick's death (copies of c. 1820 in NAL: 86 NN 4 (ii) -- CHECK). See Christopher Gilbert, The Life and Work of Thomas Chippendale (1978), pp. 237--40 and note 26, and fig. 155. 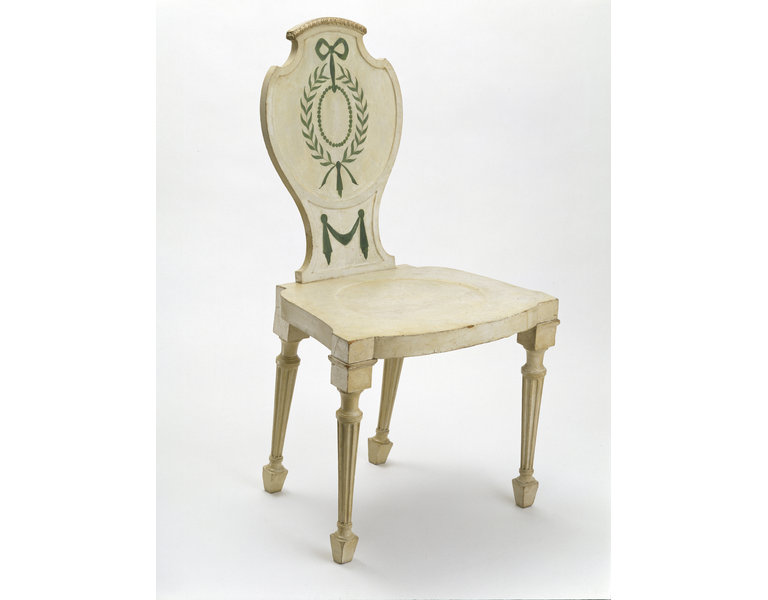