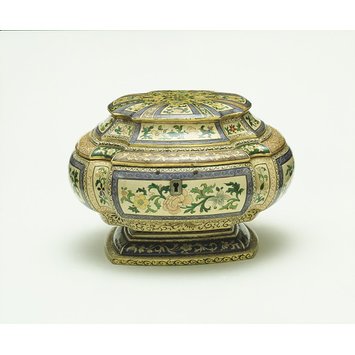 Object Type
Tea caddies were used to store loose tea leaves. They were placed on the tea table when tea was served and were decorated in a variety of fashionable styles. Tea caddies traditionally had locks because tea had originally been very expensive. This particularly elaborate caddy was given to the Museum by the makers and has never been used.

Materials & Making
The caddy is made of papier mƒch‚, a substance made by either gluing paper sheets over a mould, or pressing paper pulp in a mould. The article would then be dried in a kiln, hand-painted and varnished.

People
Jennens & Bettridge were the leading Birmingham firm of japanners, or makers of painted and varnished furniture and other objects. By 1851 they were the leading manufacturers of papier mƒch‚ in England, with premises in Birmingham, London and, between 1851 and 1852, in New York City, USA. The firm made items for Queen Victoria and exhibited at the Great Exhibition of 1851, held in London. Their stand at the Exhibition included a tea caddy but we do not know if this is the same one.

A tea caddy of papier-mâché, of octagonal form, with the smaller sides concave, the whole rounded and raised on a deep, shaped foot, the lid with concave sides and slightly domed top, following the contours of the body. The japanned decoration is on a white ground, with panels painted with flowers in imitation of Asian ceramics, with framing bands of gilded scrolling

Impressed 'Jennens & Bettridge, Makers to the Queen' with a crown above
Stamped on the base

British Galleries:
The lobed shape and coloured floral decoration with bands of repeating pattern were probably inspired by Canton enamelware made in China in the Qianlong period (1736-1795). This effect is much more rare than the more usual black and gold finish of papier-mƒch‚, imitating Chinese or Japanese lacquer. [27/03/2003] 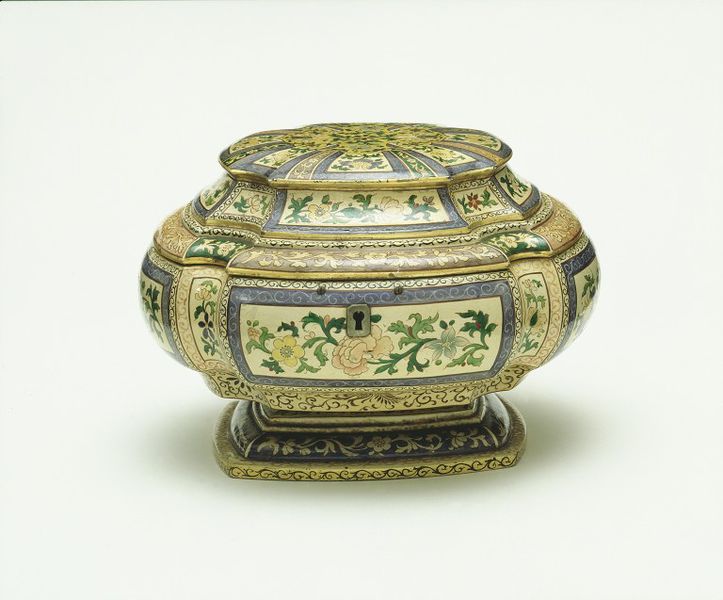