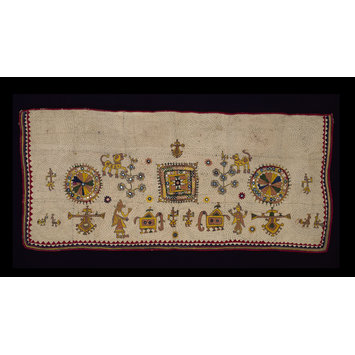 Bed hanging (kil) of embroidered and quilted cotton. Ground fabric of white, fairly coarse cotton, backed with and quilted onto a coarse white cotton lining. The embroidery is worked in coloured floss silks, mainly two yellows, orange, green and dark blue, with some small mirrors inset. The work is carried out in mainly darning and button-hole stitch, with some interlacing. The design consists of three geometrical motifs, a square one in the centre of the cloth, and a circular medallion repeated on either side of it. The square contains a central star motif, outlined with a series of borders, e.g. one of mirrors, one of interlaced work, and a spiky row on the outside. The circular medallions each contain a large stylised flowerhead surrounded by a border of mirrors, with the same spiky motif on the outside, scattered about the cloth are elephants with howdahs, human figures, birds and animals, flowerheads, whirligigs, and unidentifiable motifs. The background is quilted in widely spaced circles in a simple running stitch in blue and red. The hanging has a double border of triangles, one red, one blue. The hanging is edged with appliqué bindings, successively red, green, yellow and blue and red again on the outside.

Quilted cotton, embroidered with floss silks in herringbone-stitch and running-stitch

The hanging was intended to be hung from the side of a bed (charpai). 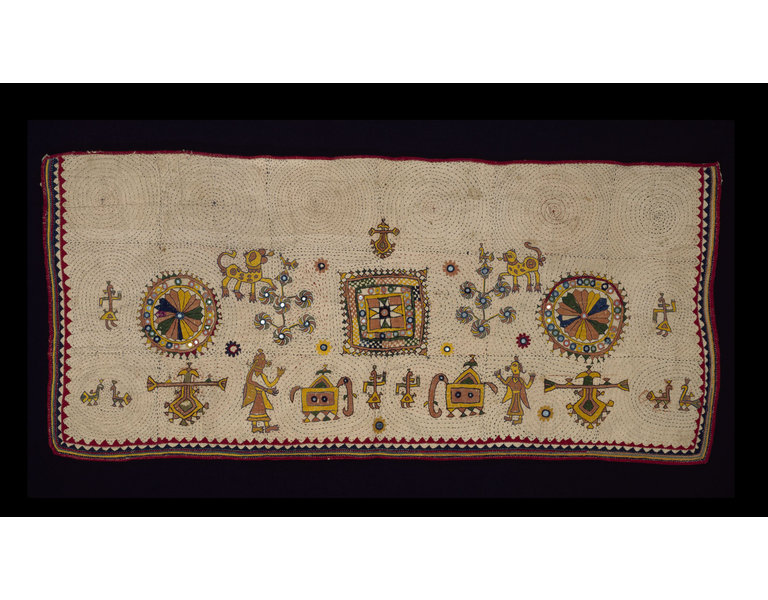