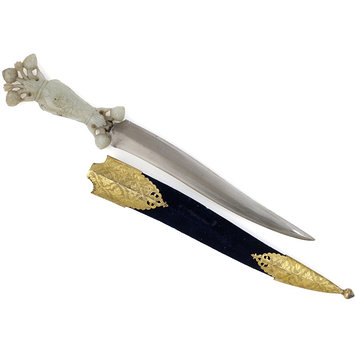 The dagger has a nephrite jade hilt that would most probably have been made as much for appearance as for functionality. It was made within the Mughal empire in the 18th century. Although the nephrite jade would have enhanced the appearance of the dagger, the weight of the hilt would also have helped to counter-balance the steel blade. Even though nephrite is a hard and durable material, one major disadvantage is that it could be liable to damage from sharp impacts, possibly sufficient to render the dagger unusable without a replacement hilt. Considering the materials used and the quality of the workmanship, this dagger and sheath would have been owned by a wealthy and important person.

A dagger and sheath. The dagger has a double-edged steel blade (possibly Damascus steel) with a slight double-curvature. It has been set into a hilt that has been fashioned in pale greenish grey nephrite jade with the shaft having been carved in low relief with leaves, flowers and buds. The quillons have been carved and pierced as two buds emerging from a collar of stylised leaves and the pommel has been carved and pierced as a row of three large buds that have been separated by two smaller buds of different form. The decoration on the dark tip of the central, larger bud has been ground off, suggesting a basic repair of damage. These buds also emerge from a collar of stylised leaves.
The sheath has a (possibly) wooden carcass that has been covered with a very deep blue velvet. It has been fitted with a gilt metal throat with a small lug with hole, and also with a gilt metal chape. Both the throat and the chape have been pierced at one end and chased in a floral design. At the very tip of the chape there is a gilt finial.

This dagger and sheath were acquired by William Tayler during his time in India (1829-1867). He subsequently sold it to the South Kensington Museum (later renamed the Victoria & Albert Museum) in 1874 for the sum of £9-0-0.

William Tayler was educated in England at Charterhouse and also spent a term at Christ Church, Oxford. He entered service with the East India Company on 30th April 1829, arriving in India in October of the same year. He held various posts in Bengal and was appointed Commissioner of Patna in 1855. During his service, he was able to acquire many objects, including hardstones, relating to the customs and religions of India as well as objects from other parts of South Asia.
He was criticised for his handling of the uprisings in Northern India and was moved to a lesser post before being suspended, ultimately resigning on 29th March 1859. He then practised as an advocate in the law courts of Bengal before returning to England in 1867.
He wrote a book about his experiences, entitled Thirty-eight Years in India, in which he states that "After my return to England, circumstances induced me, though with great reluctance, to part with the collection which is now in the South Kensington Museum". 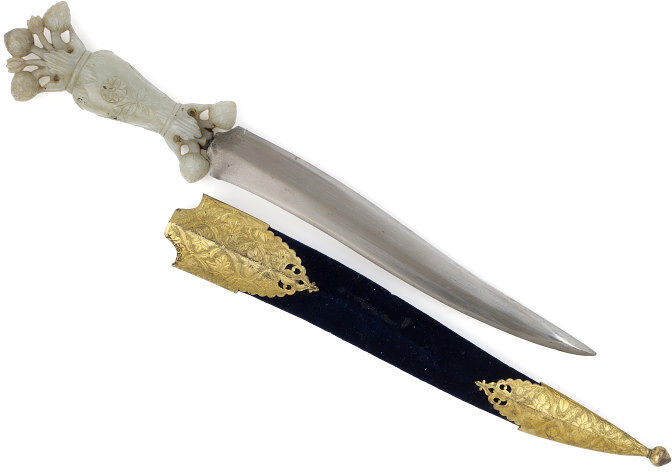