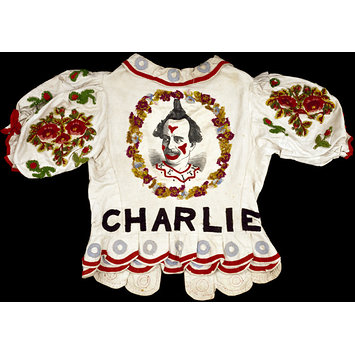 Clown costumes of the 19th are rare and this printed and embroidered costume is a particularly fine example. Charlie Keith (1836-1895) was a distinguished clown, born in London's Clerkenwell, who began his career as an acrobat, and went on to make his career as clown who ran his own touring circus. An advertisement for Charlie Keith's Circus in The Southport Critic, 15 June 1878, features an engraving of him wearing a similar costume.

Back fastening waist-length jerkin in heavy white cotton with around the neck a scalloped frill and a double scalloped frill at the lower edge, the short sleeves boldly puffed and ending in a frill edged with scarlet cotton braid. At the centre front is appliquéd a large cotton satin circle on which is printed an image of the head and shoulders of the clown, Charlie Keith, wearing his makeup and costume with the word, 'Keith', printed on his neck frill. Heart shapes in red wool fabric are appliquéd on his cheeks and forehead, a red wool fabric crescent is appliquéd on his lower lip and the neck frill is outlined in similar fabric. The edges of the circle are covered with shaped machine embroidered floral garland braid in magenta, clear and light blue, various shades of green and touches of pink and white. This image and roundel is repeated on the back of the jerkin, bisected by the back opening. Beneath the front roundel are appliquéd the letters, 'CHARLIE', in black cotton satin, with, on the back, the letters 'KEI' on one side of the opening and 'TH' on the other
On the neck frill are spaced seven rings in pale blue cotton and towards the edge of the frill is a line of scarlet cotton braid. The two scalloped frills at the lower edge are pleated between each scallop and are each set with a similar ring. To the front of each sleeve is appliquéd a bold embroidered floral motif of poppies and leaves and to the back is a similar single large embroidered flower with buds, both motifs surrounded by embroidered appliquéd buds. The embroidery is all in heavy wools. The costume fastens down the back with hooks and hand stitched eyelets pierced through the cotton.

Charlie Keith (1836-1895) was a distinguished clown who ran his own touring circus. This costume was given to the Theatre Museum by Keith's great-grandson, David Fitzroy.

Historical significance: Clown costumes of the 19th are rare and this printed and embroidered costume is a particularly fine example. An advertisement for Charlie Keith's Circus in The Southport Critic, 15 June 1878, features an engraving of him wearing a similar costume.

Jacket from a clown costume decorated with an image of the wearer, the clown and circus proprietor, Charlie Keith (1836-1895). 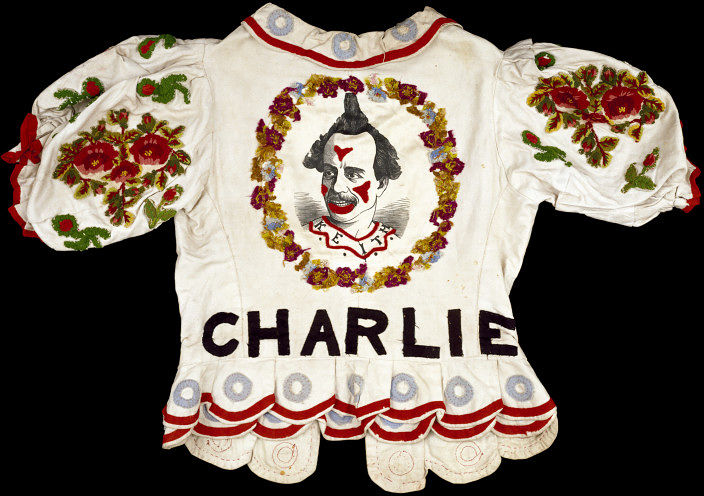