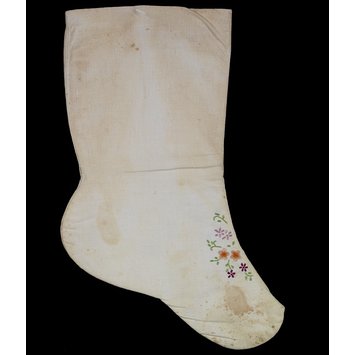 During the late 19th century, it was considered very desirable for a woman to have an egg-shaped heel. Worn as part of hanbok, traditional slipper socks beoseon had upturned toes and round heels and retained their distinct shape even after they were taken off. Beoseon were versatile for use throughout the seasons: their linings could be removed for summer or padded during winter.

Pair of white cotton indoor socks (beoseon) from Korea. Made to be worn by a young girl as part of a festival costume, they are lightly decorated with pink, orange, and green embroidery of flowers and leaves on the vamp. They are made with a double layer of fabric for extra padding and have distinct egg-shaped heels and slightly upturned toes.

2 Dec 1997
Gift from Mr and Mrs D. Bebb
Condition: Disfigured: Both padded socks are badly stained and foxed all over
Max. height 32cm

(Part of a child's festival costume for a girl)

In the shape of traditional Korean boot socks, these items were worn inside with traditional Korean costume. This pair is made with a double layer of fabric for extra thickness/padding and the white cotton if frugally decorated with pink, orange and green embroidery of flowers and leaves on the top of the foot.

This child's festival costume was acquired in Korea by a gentleman called Ron Yeats. Although no detail exist of how he acquired the costume, he worked in Korea for the Save The Children Fund from 1953-1955 where he had been posted at the end of the Korean War to help set up a children's hopsital and emdical centre in Pusan. The costume had been passed on to friends of Mr Yeats, Mr and Mrs Bebb, when Mr Yeats died.

(A full transcription of the tape made by Ron Yeats before he dies about the work he did for Save The Children, including the time he spent in Korea, can be found on the RP file)."

According to Sunny Yang, in her book Hanbok-The Art of Korean Clothing (p 91), this cotton sock (buhsuhn) was traditionally worn by men and women of all ages mostly indoor. Over the buhsuhn they would slip on their shoes when they went outside.

Also, these socks were was unlined in the summer, lined for spring and fall, and lined and padded with thin layers of cotton batting in the winter.

These cotton socks with upturned toes formed ankles, like a boot, and had round heels. They are still worn by hanbok wearers of today. For a Korean woman to have egg-shaped heel was considered the essence of loveliness. And, it was said that the prettiest foot was shaped like a cucumber seed. Thus, Koreans turned the most abused part of the body, the foot, into a thing of beauty by wearing the buhsuhn which achieved this distinction. The buhsuhn was the only part of Korean clothing that fit exactly. It did not come off easily once it was on, but retained its beautiful form even after it was taken off, unlike the western style stocking which lays simply when taken off. So beatiful is the buhsuhn that it can be used as a decoration. 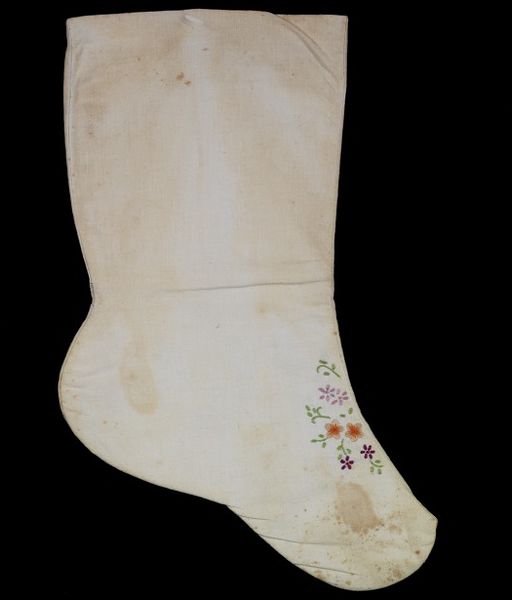