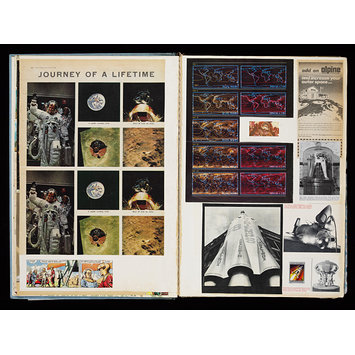 Scrapbook with blue cover, originally a pattern book of hand printed wallpapers by Warner and Greef, with the patterned pages pasted over with clippings from various newspapers and publications covering the moon landings, alongside other general space related ephemera. Squires has augmented the text related to wallpapers on the cover of the book, scoring out the company name with black paint, and inscribing 'Book 7'.
83 pages, collage recto verso with news coverage from multiple British tabloids, broadsheets and pictorial press related to Neil Armstrong, Buzz Aldrin and Michael Collins (Apollo 11 moon landings), both before and after the event, with numerous photographs of the moon and the Earth.

Alongside this coverage is a range of other space related news including a story on Mariner 6 and Mars. Numerous pages display comic strips and stickers related to astronauts and space travel, ergonomic design, advertising for home furnishing and various products inspired by the vogue for space travel, an album cover for CMU, book covers including titles by Edgar Rice Burroughs, Arthur C. Clarke, Kenneth Bulmer (Tully Zetford), Isaac Asimov, Ray Bradbury, and Jack Vance, cigarette cards of rockets and spaceships, pictures of cars, planes and ships, official 8x10 photographs of astronauts from the Apollo 9 mission, the packaging for a Miniflex toy entitled 'Space Safari', domes in Istanbul which resemble UFO shapes, colour charts, pictures of the lunar module at Cape Kennedy, Star Trek candy packaging and two completed Star Trek jigsaws, close-up images of colourful rock formations, psychedelic rooms, a cover of Rolling Stone magazine featuring the disco group Labelle in silver costumes, the cover of a children's comic entitled 'The Hotspur', photographs of the Earth from space, two completed jigsaw puzzles of space flight and American astronauts on the moon, a poster with a selection of gemstones from the Geological Museum in London, space themed advertisements for breakfast cereals, the cover of 'The Radio Times' from 16-22 November 1974, Russian astronauts and the Soyuz descent module, a Dan Dare cartoon prophesizing Mars landings in 1988, photographs of the planet Jupiter from Pioneer 10, a complete series of 25 cigarette cards entitled 'Space Mysteries' issued with the Space Man Bubble Gum cigarette series, clippings about a television series entitled 'Space 1999' starring Peter Cushing and Christopher Lee, the Radio Times cover from July 1975 about how American Apollo and Russian Soyuz astronauts will meet in space, advertisements for a Braun hair product for women entitled 'The Astronette', 1960's style television sets by 'Philco', a seven page short story entitled 'The Cones' by Robert Palmer, typed out and pasted into the album, a Wellsian Martian operated by a man on the cover of 'The Lion' annual of 1969, a Dairy Queen advert featuring a character called 'Astro-Chimp', parts of the Sunday Times magazine from April 21, 1974, with artwork by Chelsey Bonestell and words by Arthur C. Clarke, a postcard of the organ pipes in Solomon's temple (caves at Cheddar gorge in Somerset), a photograph of the South Bank centre, a silver V&A poster by Sue Palmer for 'A Century of Warner Fabrics 1870-1970', the cover of a Dan Dare annual from 1963, Rothman's cigarette packacging displaying a photograph of the Concorde, a postcard of the Astroglide slide at Scarborough, magazine articles about a solar powered house, an erotic poster for 'Granny takes a Trip', a section of the Observer newspaper from 10th Cotober 1976 with Buzz Aldrin discussing his divorce and alcoholism ('questioning the values of the society that built him for herosim', a French comic strip entitled 'Chroniques d'Espace' and covers for two French comics entitled 'Meteor'. The final page in the book is a British Airways newspaper article from 1976 announcing the birth of Concorde with the headline 'The Future Begins Today'. On the back inside cover is a Pink Floyd sticker for 'Wish you were here' and a comical Heineken advertisement featuring Spock from Star Trek.

There is also a loose transcribed sheet of the Apollo 8 mission commentary from December 1968. All of the pages in the album have come loose from the binding.

Scrapbook (No. 7 of 9) compiled by Eddie Squires, consisting largely of clippings from newspapers related to the first moon landings, astronauts and the beginning of space exploration, alongside science-fiction and space related ephemera. Great Britain, ca. 1968-1976. 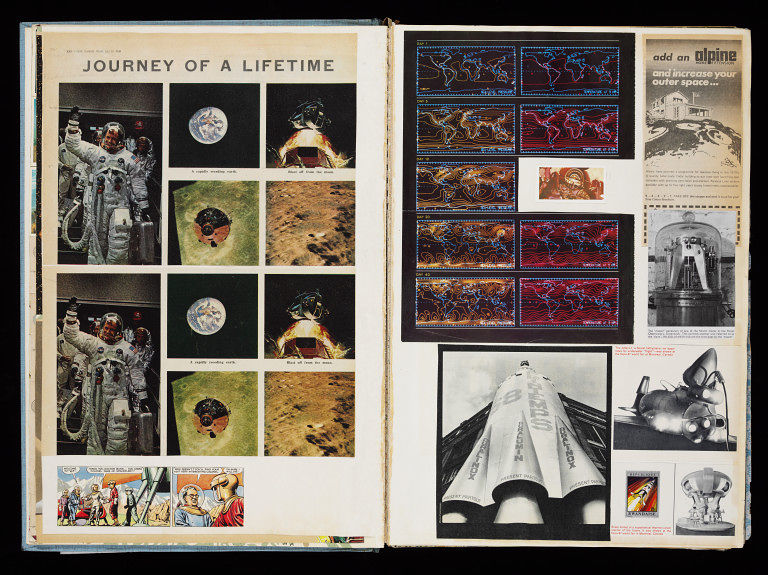