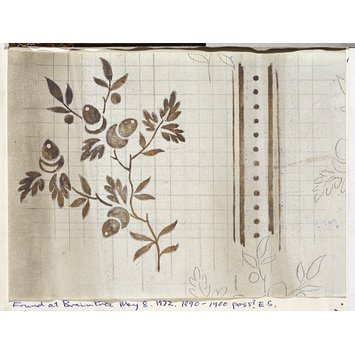 A leather-bound scrapbook in taupe with a hand-written note on the spine reading 'Book No. 6 Compilation from 1972 contains non-chronological reference from 1930s, 1940s, 1960 and 1970s'. The book contains 65 pages covered with various paper ephemera pasted onto the pages (recto-verso), as well as several blank pages in the back of the book and approximately 100 pages cut out leaving a 1-2 centimetre long tab behind. The album begins with a blue and white leaflet advertising a V&A exhibition, 'A Century of Warner Fabrics 1870-1970', pasted onto the endpaper. There then follows a selection of chintz and floral designs with assorted postcards of mountain views and tourist destinations. Some have hand-written notes alongside or are dated in pencil and pen. The second page contains a recto-verso drawing of Elvis Presley wearing a jacket, the front of which resembles a jukebox and the back resembles the rear of an ornate American car.
Following this are scraps of wallpaper designs, 17th and 18th century still lifes with flowers, as well as 1950s floral designs from China and a clipping about Eddie Squires visiting his hometown of Grimsby in 1968. There is a 'mineralogist collage' by Sue Palmer, signed and dated 1970, images of rockeries cut out of magazines, black and white photographs of a retirement party, colour charts of gemstones, and postcards of 18th century furniture. On the reverse of page 9, the scrapbook briefly becomes a travelogue of a trip to Turkey. A typed travel diary by Squires describes a ten day trip to Greece and Turkey, starting at the Acropolis, before heading to the Benarki Museum, Delphi, an Archeological museum, the Blue Mosque of Istanbul, Hagia Sophia, the Grand Bazaar, and Topkapi Palace. He describes the 1950s American cars on the streets of Istanbul in detail, the meals he has eaten, and the fact that he is running out of spending money.
Following this are designs for Persian carpets, a double page spread of ephemera related to the Last Supper, celestial charts, images of flowers and clippings of the Pre-Raphaelites. There is a double page spread of Eddie Squires' personal photographs of his trip to Istanbul depicting mosques, bazaars and street scenes, as well as a photograph of Squires. There is a second double page of 3x5 photographs depicting interior views of the Hagia Sophia, the minarets and finally Heathrow airport on the day of Squires' return.
There are detailed charts for colour trials for machine-made tapestries, postcard examples of screen printed furnishing fabrics, newspaper clippings of 1960s and 1970s style room interiors, and photographs of a meeting room designed by Eddie Squires for Signal Films in Berwick St, Soho, 1969. One of these photographs depicts the artist seated in an inflatable transparent chair in front of a large white plastic table. There is a 1960s article by Janet Street Porter discussing the latest trends in trousers for women, a series of kitsch stickers depicting cartoon animals and children, a 'Birds and Dragons' collection by Squires and Sue Palmer, a series of cigarette cards printed on a silky material depicting portraits by Old Masters including Franz Hals, Van Dyke and Rubens.
There is an old fashioned map of Cheshire, decorative orange wrappers, a printed card by Patrick Proctor from 1970 entitled 'Indian Suite', the sheet music to a song entitled 'Cry' by Churchill Kohlman from 1951, notes regarding changes to the 'Last Supper' needlework project, a series of Picture Book prints depicting trains and car components, and cut-out cards of various princesses.
There is a photograph, possibly depicting the artist, wearing leather and walking down an empty street with a man across the road looking at him. A note in pen at the side reads 'Portobello...cruising'. There are series of stickers depicting sailors loading cannons and tattooing each other, photographs of the artist's friends and co-workers David Exley and Graham Smith, a postcard depicting a bestial act with a swan, a comic strip entitled 'Menu', an article entitled 'The Fabric of Pop' by Michael Shepherd at the V&A, a head-shot of Marilyn Monroe, a selection of hand-tinted Scottish postcards from 1905 and 1931, fashion plates cut out of the Sunday Times Magazine, a strip of passport sized photographs of the artist, an article about Robert Palmer from Rolling Stone in September 1975, an advertisement for washing powder entitled 'Face', an article about pollution standards in 1975, an article about brain washing, an invitation to the Ossie Clark Spring Collection of 1976, a small Richard Hamilton poster, a chart of wildlife from the Norfolk Trust, and a poster of small rodents by Rita Parsons at the Mammal Society.
Finally there are two photographs of shop fronts in the summer of 1976, one with a note in pencil reading 'Hairdressers', as well as two photographs of a gay pub in Earls Court called The Coleherne, depicting a large group of men stood outside, mainly dressed in denim flares with denim or leather jackets. The pub is photographed from behind a blue car across the road. The final item in the scrapbook is a leaflet from the V&A advertising 'Coming Events' in November 1976. 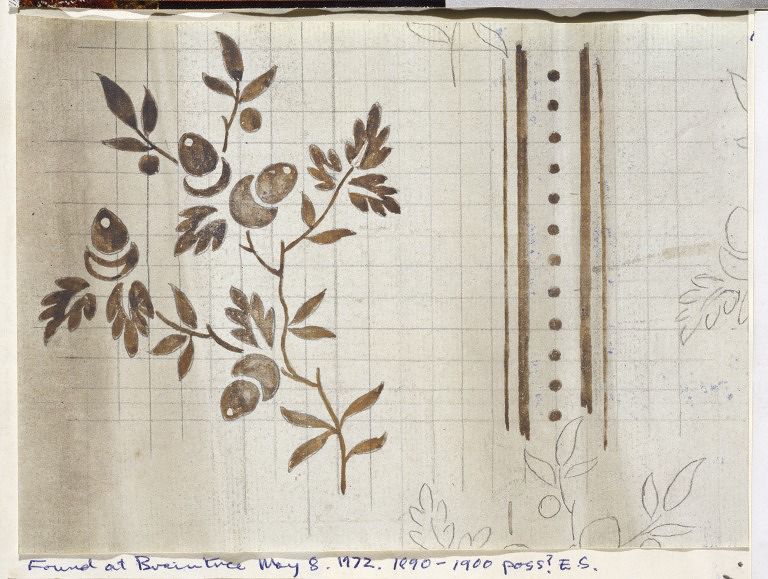