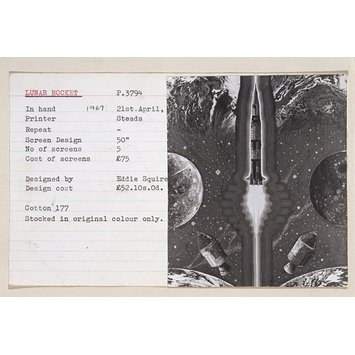 Album of 107 bound pages mainly containing ephemera concerning outer space and space exploration, and related subjects such as cars and aeroplanes. The album is covered in the 'Space Walk' fabric designed by Sue Palmer and manufactured by Warners in 1969. The contents include children's drawings; stamps; book illustrations; book covers; press cuttings; comic strips; pages from 'The Eagle'; postcards; plastic bags; business cards; advertisements; food packaging; cosmetic packaging; collecting cards; 3D postcards; proprietary artist's paint colour charts. Most of this material is contemporary with the album but some is from the middle decades of the twentieth century.

Eddie Squires' friendships and professional contacts are represented in the album through a card from Burt Kitchen, Muriel Kitchen and Corinna Kitchen; card from David Eno and Gill Eno; collage by Pat Gavin; invitation from Joel Goldstein, 1971; photograph of Mike Jones, 1972-3; drawing by Toni Leonard; photograph of Sue Palmer's 'Jewelled Sky' design 1971 or 1972; drawings by Gareth, 1973; letters from Gordon, November 1973 and January 1974; card from Mervyn, 1974; card from Sandra and Gerry; card from Valerie, 1974; photograph of Eddie Squires with friends, 197?.

assorted drawings, prints and ephemera collected in an album

Inscribed throughout with pen and pencil notes detailing source/date of contents. 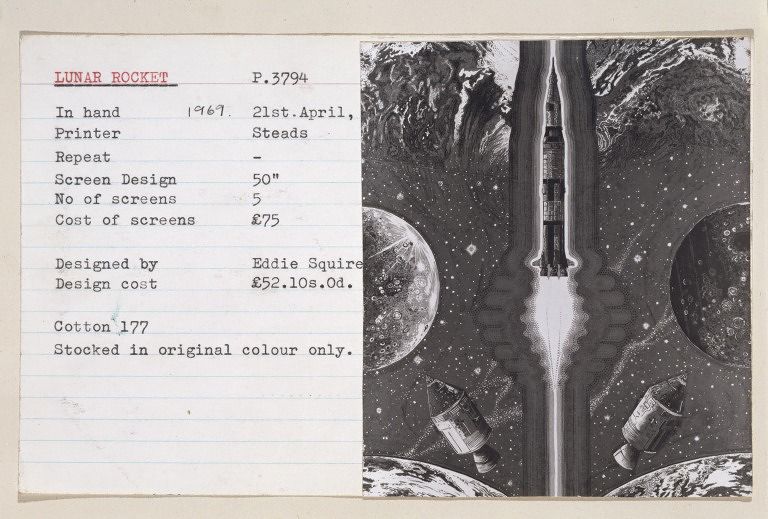