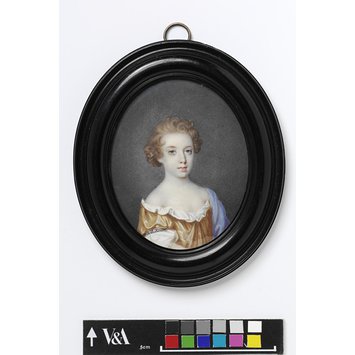 This miniature is one of a group of five portraits of members of the North family. In his Seventeenth-century English Miniatures in the Collection of the Victoria & Albert Museum (1997), John Murdoch notes that the miniatures were probably painted by Edmund Ashfield (worked 1669-90). He thought this because of the signature ‘E.A’ that is found at the lower centre right on another miniature from this group. This is of Charles North, 5th Baron North de Kirtling (catalogue number 131 in Murdoch’s book; Museum number P.42-1987).

Edmund Ashfield was a painter in oil and ‘crayon’ (what is called today ‘pastel’), but it was long thought that he had also painted miniatures. This group apparently supports this belief.

Portrait of a girl, half-length, facing to front. Features softly hatched and stippled in brown and sanguine, modelled with blue and grey, with red for the lips and black in the eyes with highlights of white, on a warm creamy carnation; hair in pale brown wash, worked over in darker colour, some lights in pale grey and touches of pink at the hair-line; dress in ochre wash, modelled in two shades of brown with white and grey heightening; chemise in white shaded with grey, brown and blue; background in pale grey, washed and hatched over in darker colour, and lightened behind and around the head; on vellum put down on a leaffrom a table-book.

Frame: An oval frame, turned ebony of bolection moulding with additional grooves at the outer and inner edges; the inner ring possibly made separately; the convex glass set in a rebate; a plain brass ring for the hanger, with traces of original gilding, held by a pin driven through the wood at the top; inscribed in ink on an old label attached to the paper cover of the backing: Miss Catherine/North, in the same hand as on P.42-1987.

Watercolour on vellum lput down on a leaf from a table-book.

'2'
Inscribed in silver-point on the back

Portrait miniature of the Hon. Catherine North when a child, watercolour on vellum by Edmund Ashfield, ca.1690. 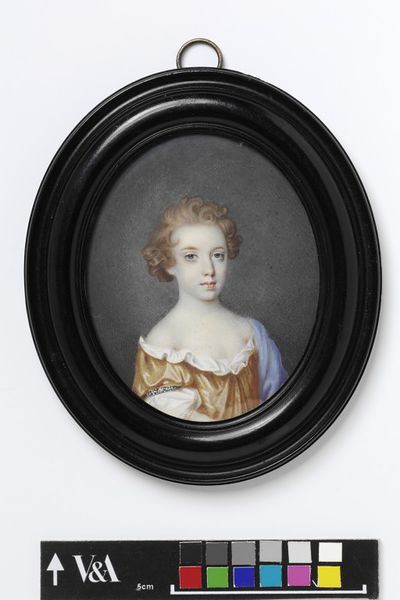