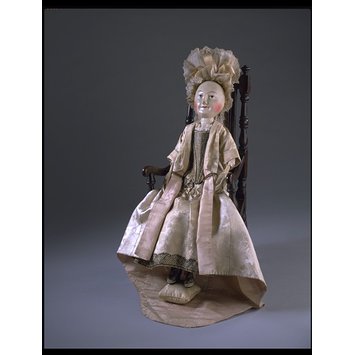 Object Type
This doll, known as Lady Clapham, is thought to have belonged to the Cockerell family, descendants of the diarist Samuel Pepys (1633-1703). The daughter of Pepys's nephew John Jackson (the son of his sister Pauline) married a Cockerell, who had a family home in Clapham, south London.

Designs & Designing
Lady Clapham offers a fine example of both formal and informal dress for a wealthy woman in the 1690s (Museum nos. T.846&A to Y-1974). Her formal outfit includes a mantua (gown) and petticoat, while her informal dress is represented by the nightgown (a dressing gown rather than a garment worn to bed) and petticoat. Accessories such as the stockings, cap and chemise (a body garment) are very valuable since very few items from such an early period survive in museum collections. Equally important is the demonstration of how these clothes were worn together.

Ownership & Use
Dolls were widely produced in the 17th century, although very few survive, due to the wear and tear they usually undergo. The high quality of Lady Clapham and her clothes indicates that she would have been expensive. There is little evidence of use, which suggests that she was admired by adults rather than played with by children.

Doll made of turned wood, with square shoulders, a waisted body, wooden arms and jointed legs, in the style representative of a late 17th century lady.

The legs are hinged at the thigh and knee, and the forearms and hands (in one piece) are of wood. The upper arm is made of cloth attached by stitching through a hole bored in the forearm, also attached at the shoulders.

The head is turned in one, with the neck and features (including the eyes) carved, gessoed and painted with black, red and pink.

The body is covered with stuffing and with a linen cloth cover wrapped around the body from the thighs to the shoulders, which attaches at the arms. The arms and upper legs are gessoed with flesh colour, and the lower leg and foot are painted black. The hair consists of a short curled blond fringe wig of human hair on a cloth foundation, stitched to net and nailed to the head, and with a circular plaited bun at the back intertwined with pink ribbon.

The doll is thought to have belonged to the Cockerell family, descendants of Samuel Pepys. The daughter of Pepys' nephew John Jackson(son of his sister, Pauline) married a Cockerell. The doll and its partner were named 'Lord' and 'Lady' of the family home in Clapham.

Historical significance: The doll and its partner are costume documents; their clothes being, in style, cut and material, perfect miniatures of the fashions of the late 17th century. Their importance is underlined by the almost total lack of other good visual source material for this period, whether pictorial or in the form of surviving garments. In particular the survival of accessories and the informal garments is extremely rare.

Dolls were widely produced in the 17th century, although very few survive. It is most unlikely that these particular examples were the playthings of children. Their production is of a high quality; almost all the accessories survive and there is little wear and tear on the dolls and their garments. The dolls were most probably purchased for the amusement of adults, and as a decorative accessory to a home.

British Galleries:
These dolls were probably made for the amusement of adults at home, as were dolls' houses at this time. They were named 'Lord and Lady' of the family home in Clapham, London by their owners, the Cockerell family. The outfits of the dolls are perfect miniatures of London fashions of 1690 and 1700. She wears a mantua (gown) of Chinese silk over stays (a stiff corset), with an under-wired cap and high-heeled shoes. [27/03/2003] 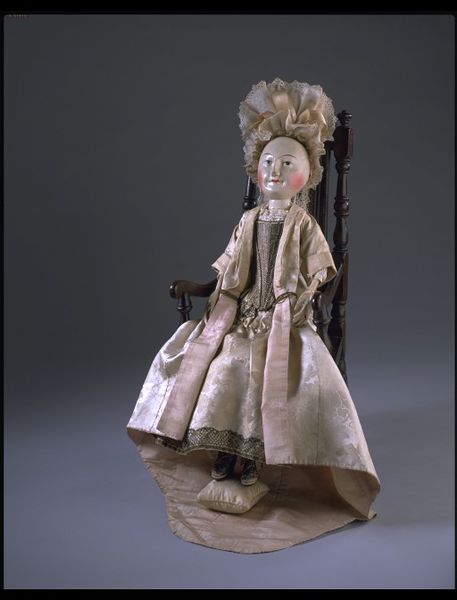