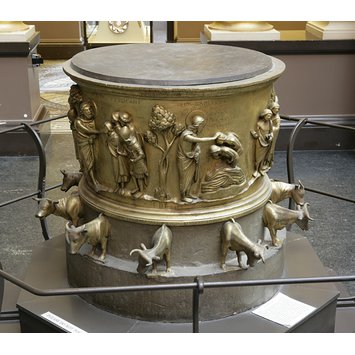 Copy of a Font

The original font’s function is reflected in its decoration, which includes a depiction of St John the Baptist baptising Christ. There are also twelve oxen supporting the font, evoking a passage from the Bible that describes a basin from King Solomon’s temple in Jerusalem. The entire font was cast in one piece, like a bronze bell. This skilful technique and the font’s sophisticated relief sculpture meant it was a key work to be copied.

Plaster cast of a font with representations of St. John the Baptist baptising the Publicans, a group of penitents, and Christ; St. Peter baptising Cornelius; and St. John the Evangelist baptising Cato the philosopher. The oxen carrying the font are an analogy to the molten sea supported by oxen in the Temple of Jerusalem (I, Kings, vii, 23) and identified as symbols of the Twelve Apostles by Rupert of Deutz in his treatise De Trinitate written at Liège about 1117.

(probably), made)
Belgium (Original, made)

Copy of a font made in plaster probably in Brussels about 1876-77 and acquired in exchange with the Belgian Royal Commission for Promoting the Reproduction of Works of Art in 1877. The original was made in bronze by Rupert of Deutz and Rainer of Huy in Liège, Belgium, 1107-18. The bronze font was originally in Notre-Dame-aux-Fonts, but is now in the Church of Saint Barthélemy, Liège.

Plaster cast of a font with a depiction of St John the Baptist baptising Christ, cast in Brussels in about 1876-77. The original was made by Rupert of Deutz and Rainer of Huy in 1107-18.

The original font’s function is reflected in its decoration, which includes a depiction of St John the Baptist baptising Christ. There are also twelve oxen supporting the font, evoking a passage from the Bible that describes a basin from King Solomon’s temple in Jerusalem. The entire font was cast in one piece, like a bronze bell. This skilful technique and the font’s sophisticated relief sculpture meant it was a key work to be copied.

Cast
About 1876–77
Painted plaster
Probably Brussels
Presented by the Belgium Royal Commission for Promoting Reproductions of Works of Art
Museum no. Repro.1877-1 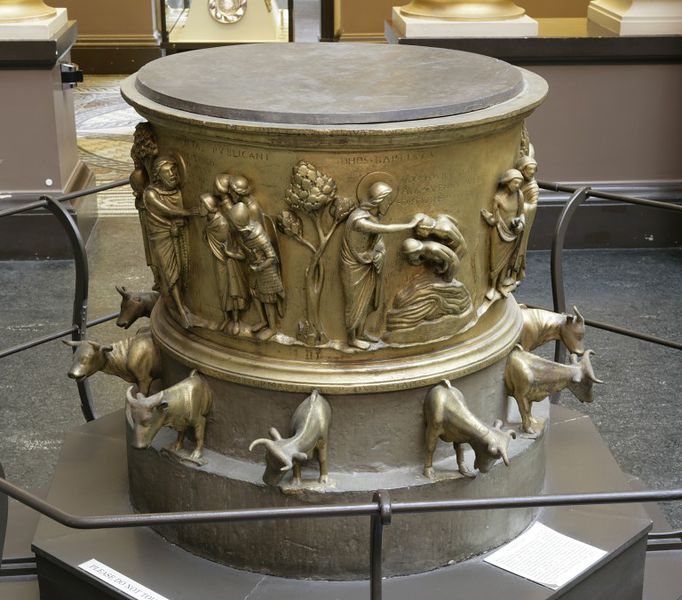