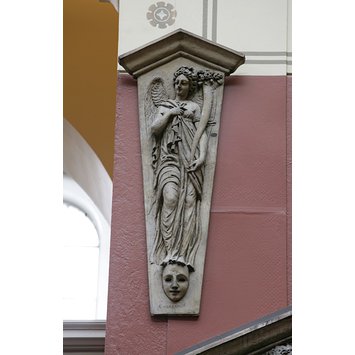 The allegorical figure of Abundance and the hunter goddess Diana are examples of the work of Jean Goujon, sculptor to King Henri II of France. The plaster casts of the original stone reliefs were purchased by the Museum in 1883 from a Parisian plaster cast maker. They illustrate a Victorian interest in French Renaissance and Mannerist art.

Paris (Copy, made)
France (Original, made)

Cast of a stone relief created about 1883 and purchased from Monsieur L. Mathivet in 1883 for £1 12s (40 francs). The cast is of a stone relief depicting the allegorical figure of Abundance, which was sculpted by Jean Goujon about 1548-60. They illustrate a Victorian interest in French Renaissance and Mannerist art.

Plaster cast of a stone relief by Monsieur L. Mathivet about 1883, and purchased by the Museum in 1883. The cast depicts the relief of the allegorical figure of Abundance sculpted by Jean Goujon about 1548–60.

The allegorical figure of Abundance and the hunter goddess Diana are examples of the work of Jean Goujon, sculptor to King Henri II of France. The plaster casts of the original stone reliefs were purchased by the Museum in 1883 from a Parisian plaster cast maker. They illustrate a Victorian interest in French Renaissance and Mannerist art.

Original
Stone
Musée Carnavalet, Paris [04/07/2018]
Like the other reliefs at the Musée Carnavalet, an imposing renaissance building in Paris, now a museum, this allegorical figure of Abundance is a fine example of Jean Goujon's work. The original carved stone sculptures were executed during the reign of Henri II of France, a great patron of the arts. Goujon's sinuous and sensual figures were much admired, and seen as epitomising French sculpture in the mid-16th century, following the great era of Italian artists working at the Palace of Fontainebleau, under Francois I, Henri's father and predecessor as King of France. The plaster cast after the original stone relief was purchased by the Museum in 1883 from a Parisian plaster cast maker, illustrating the interest in Victorian Britain in French renaissance and mannerist art. 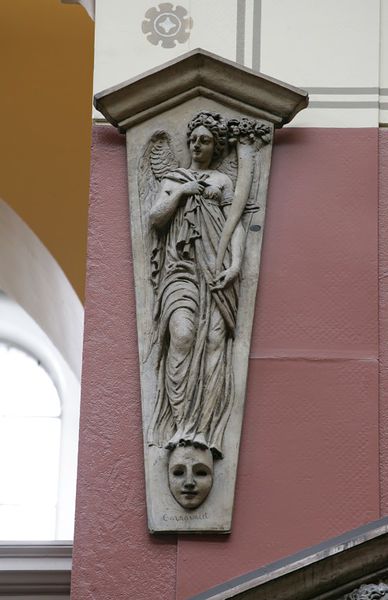