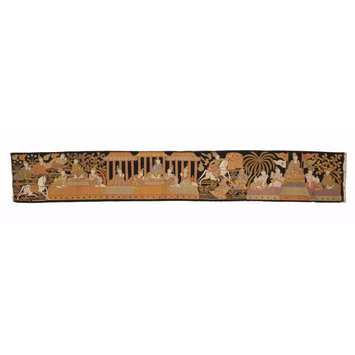 The Victoria and Albert Museum was advised that it should not miss the opportunity of acquiring this 'wonderful kalaga' when it was displayed in the Burma Pavilion of the British Empire Exhibition at Wembley in 1924.

Kalagas (pictorial textile hangings) with religious or secular themes were used either as decorative wall hangings, room partitions, or as screens hung outside the house on festive occasions. This one, of black velvet with appliqué designs of shaped coloured fabrics, silver and gold thread, silver sequins and imitation jewels, illustrates episodes from the popular Vidura Jataka (a story about the Buddha's former lives). The costumes of the figures are depicted in the stylised tradition of Burmese theatre relate to the fashions worn in the Mandalay Court of about 1880.

Britain's control of Burma extended as the 19th century progressed, and the country was annexed in 1885. The extravagant style of kalagas appealed to Burmese and Europeans alike and their popularity soared in the middle of the 19th century.

The ornament is formed of various pieces of textile cut to the required shape and stitched to the velvet ground by cotton or metal thread. It is enriched by the addition of spangles, red, green and yellow wools, and imitation (glass) pearls and larger jewels of mirror-glass and clear glass mounted on red foil.

Set in four scenes (read from left to right), the subject is drawn from the We-dura zat (Vidura Jataka) - one of the last ten of the Buddha's birth stories.

Starting from left: A princely figure (could be the naga King as the lady on his right is shown with a naga headdress) holds court. Before him is Ponnaka, the belu demon and his white charger. Behind and above him are the naga courtiers. This is probably the scene in which the naga queen expresses her wish to hear the minister Vidura expound on Buddhist doctrine. In this scene, she feigns sickness and demands the heart of Vidura, claiming that it would cure her. The demon, who has fallen for Irandati, the queen's daughter, promises to bring Vidhura back to Nagaland.

The next is a scene within the naga court shows (possibly) the naga king accompanied, on his right, by two of his naga consorts, and on his left, by two ministers. Apart from the central figure, they are all shown wearing the naga headdresses.

The next scene: Beyond the naga court, Ponnaka rides off on his white charger to the city of Indapatta to play dice with its king Dhananjaya - the prize is Vidhura. Two demons point the way.
[The victorious demon returns with Vidhura and tries to kill him by tying him to his horse's tail and dragging him over the mountain tops. The demon then explains his reason, and Vidhura realises that what the naga queen had meant was that it was the "heart of his wisdom that she desired" and not his actual heart. The demon begs forgiveness and takes the sage to Nagaland. A throne magically appears and Vidhura was able to offer the court "his wisdom and his heart"].

The final scene on the extreme right: Vidhura on his seat of honour expounds the glories of the Buddhist Law. On his right are the naga king and the king of the garudas (enemies of the nagas - yet brought together under the benevolent influence of the sage). On his right are the figures of an unidentified king and a prince. Ponnaka marries his naga princess.

The figures are dressed in the court costumes of the Konbaung Dynasty.

"Received from the Commissioners for Burma, The Burma Pavilion, per JM Symns" (Exhibition Commissioner) 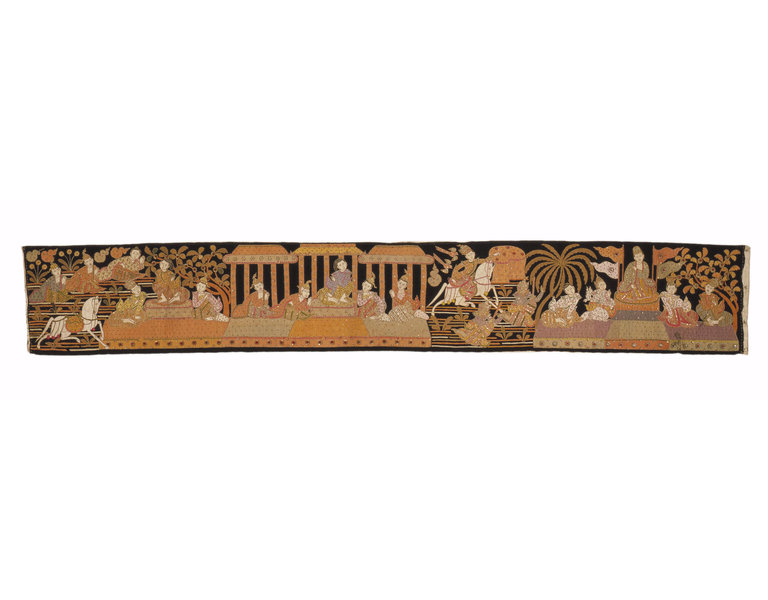