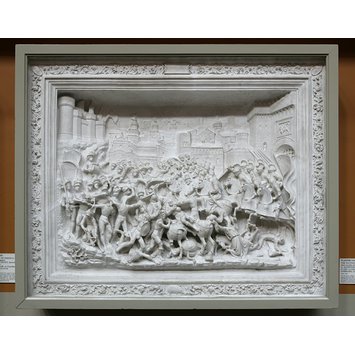 The Battle of Brescia

Plaster cast relief of a marble original by Agostino Busti (known as Bambaia) from the monument to Gaston de Foix, Duke of Nemours. One of seven scenes, this scene depicting the Battle of Brescia. The monument is in the Villa Crivelli at Castellazzo

Purchased from Edoardo Pierotti in 1884 for £4

One of seven reliefs (museum nos 1884-652 to 658) from the tomb of Gaston de Foix showing scenes from his life. This scene depicts the Battle of Brescia. The Brescians revolted against the French, with the aid of Venetian forces, commanded by Giovanni Paolo Baglione, but were defeated by the French army led by Gaston de Foix, whose troops mercilessly sacked Brescia.

Gaston de Foix (149-1512) was a nephew of king Louis XII of France, and the grandson of Giangaleazzo Visconti, Duke of Milan. He died in the battle of Ravenna on 11 April 1512. At the time of his death, he was governor general of the French forces in Italy, and Viceroy of Milan. His tomb was completed after the entry of King Francois I of France into Milan, on 14 September 1515, but work on the monument was abandoned in 1521/2, when Emperor Charles V and Pope Leo X took Milan. In his will of September 1528, Bambaia left the remaining marble intended for the tomb to the church of S. Marta in Milan, but the project was never to be completed. In the mid-sixteenth century, Vasari saw the unfinished tomb in S. Marta. He described how there were ten reliefs depicting scenes from the Life of Gaston de Foix lying on the floor, not yet built into the monument. While there were many large finished figures, there were also some only half finished, or roughed out. There were also many carvings of foliate decoration and trophies and weapons. At this stage, some of the figures had already been stolen, sold, or placed elsewhere. Since Vasari gave this description, the tomb has suffered further losses. The surviving elements comprise:
i. The effigy, transferred to the Museo Archeologico in Milan in 1806, now in the Castello Sforzesco in Milan (V&A cast 1884-666).
ii. Seven reliefs, with scenes from the life of Gaston de Foix in the Villa Crivelli at Castellazzo, known to have arrived there prior to 1672 (V&A casts 1884-652 to 658).
iii. Six fragmentary statues of Virtues, and other fragments of the monument also at Catellazzo. These entered the Villa between 1673 and 1712 (not represented at the V&A in casts).
iv. Four decorative panels, showing weapons and trophies, in the Museo Civico in Turin (not represented at the V&A in casts).
There are three marble reliefs (museum nos. 7527-1860, 400-1854 and 7260-1857) depicting mythological scenes, in the style of Bambaia, and three figures of Virtues, attributed to Bambaia museum nos. 4912-1858, 7100-1860 and 332-1903) in the collections of the Victoria and Albert Museum. Both the reliefs of the figures have been connected with the tomb of Gaston de Foix. 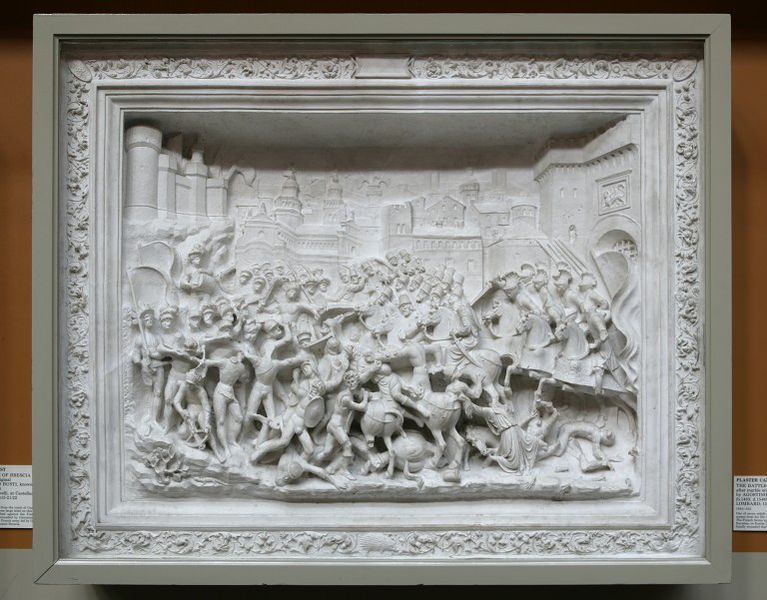