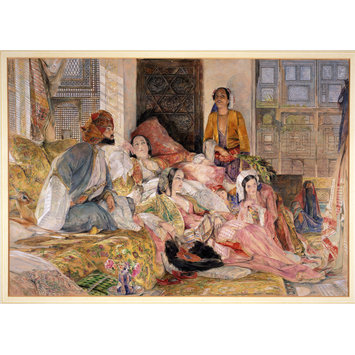 John Frederick Lewis rented the actual house that is shown in this picture. He lived in Cairo, Egypt, for about ten years. Lewis was the most talented artist of his time to visit and record the Middle East. This watercolour is a version of a work he exhibited in 1850 at the Old Watercolour Society. Both the public and the critics admired it.
The subject of the watercolour is rather unclear in the V&A picture. A photograph of the painting exhibited at the Old Watercolour Society shows the picture extended on the right to reveal another group of figures. This group includes a new member of the Harem being presented to the Pasha (an officer of high rank). This would explain the alert interest of the Pasha and the expressions of the other four women in the V&A picture.

Watercolour depicting the interior of the women's quarters of a Mamluk house in Cairo, with a Turkish Bey, his wives, his son, a house-trained gazelle, servants and the wife of a slave dealer, right hand margin cut away, leaving only a fragment of the drapery of the new slave.

This picture is a reduced version of the lower left section of Lewis's famous painting of `The Hhareem' of 1849, now in the collection of the Nippon Life Insurance Company, Osaka. It is not known exactly when this version was made and why or if it was cut down. Only a fragment of the drapery of the new inmate and the hand of the eunuch are now visible on the right. After the acquisition of this picture by the Museum in 1949 it was generally believed that this version was the original, but Rosemary Treble finally decided the issue in her catalogue `Great Victorian Painters and their Path to Fame' held at the Royal Academy in 1978.

Lewis's own description of that painting when it was exhibited at the Royal Scottish Academy Exhibition in 1853 [No.494] appeared in the catalogue as follows:

`The Hhareem of a Mamluke Bey, Cairo; the introduction of an Abyssinian Slave. J.F. Lewis.

The scene is laid in the upper or women's apartments of a house in Cairo, the lower part of the house being always appropriated to the men. The Master (a Bey and a Turk) is habited in the old Mamluke dress of Egypt, now not often worn. Immediately to his left is seated a Georgian the "Sit el Gebir" or ruling lady of the Hhareem, having obtained that privilege by being the mother of his eldest son, who is leaning against her knee. The lady stooping forward is a Greek and the one reclining at the Bey's feet, a Circassian. The laughing slave - an old inmate. The girl who is being unveiled by the black guardian is also an Abyssinian, but lately arrived from the upper country, and brought into the Hhareem by the wife of the slave owner, who is a fellah, and is seated in the middle distance, habited in the out-door dress of the common people. The boy to the right is a Nubian, who is bringing in a sheetha or narghile. On the divan and near the boy are gazelles, the frequent indoor and out-door pets of all classes. The windows, which are often of an enormous size, are all covered with the finest carved wood-work, at a distance resembling lace, and which does not prevent the inmates from seeing all that is passing, while it effectively precludes the possibility of being seen from without. The walls of all old houses are whitewashed, and only ornamented with borders, often of texts in Arabic from the Qur'an; the elaborately carved dark wood-work of the ceilings contrasts effectively with the whitewash of the walls. The rooms have no furniture save the divans, mats or carpets, no tables or chairs, the dinner being served on a round tray of silver or brass, and placed on a stool; as is represented on the right of the picture. Coffee is being brought in by the attendants in the background.'

The Hhareem, Cairo, watercolour and body colour, painted by J.F. Lewis, about 1850

This watercolour is a reduced version of a work exhibited in 1850. In the other version, an additional group of figures on the right includes a new member of the harem being shown to the wealthy Turk. This explains the various expressions of interest in the V&A picure.

It is not certain where this version was made but probably in Britain after his return. 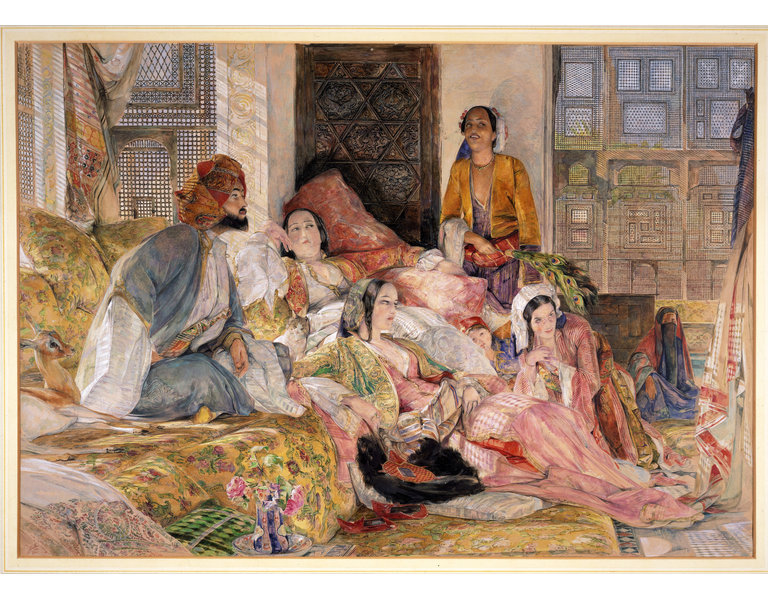