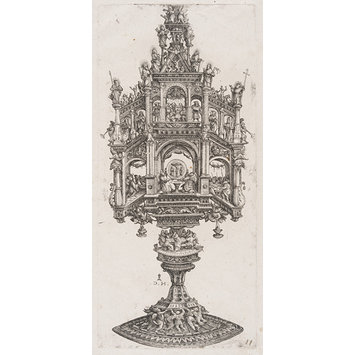 This is a design for a monstrance, a Christian liturgical vessel in which the Sacred Host is displayed in the Roman Catholic church. The Sacred Host is the communion bread that Roman Catholics believe is turned into the Body of Christ in the Catholic service of the mass, at that part of the service which is known as the consecration; this is the moment when bread and wine are consecrated at the altar and, according to the Catholic faith, are transformed into the body and blood of Christ. During the annual feast of Corpus Christi, the priest holds the monstrance aloft in procession around the church ending at the altar where he places it. The monstrance remains on the altar during what is known as the exposition of the Blessed Sacrament during the special service of benediction. This design shows how the Sacred Host is displayed in the centre of the monstrance and its position is marked by the circular disk, depicting the crucified Christ flanked by two Apostles, in the centre of the lower niche of the monstrance. In this design, angels
hold up the Sacred Host.

This design is for use in a goldsmith's or silversmith's workshop. Monstrances are made of gold or silver and the central compartments are glazed. A hinge would allow the glazing of the compartment to be opened as a door for the priest to insert or extract the Sacred Host. The design is printed from a metal plate that was bitten with acid in the printing process known as etching. It was printed by Daniel Hopfer (about 1470-1536).

Design for a monstrance consisting of a foot supporting what appear to be two floors of niches containing religious scenes. At the top of the foot, the Last Supper is portrayed. In the central lower niche, two angels hold up a Sacred Host showing the crucified Christ between two Apostles. On top of columns bordering the upper niches are depicted the Apostles. In the central, upper niche is a depiction of manna being sent from Heaven as related in the Old Testament. The roofs of the upper niches show scenes from the Last Judgment. The design is printed on a narrow, rectangular sheet of greyish, laid paper. The paper clearly shows the impression of the plate mark .

The printed image of a finial on top of the suggestion of a dome above the letters 'D.H.'
The etcher's monogram in the form of a finial and his initials are located on the left side of the print just above the foot of the monstrance. .

'11'
Handwritten in brown ink at the lower right hand corner on the front. This refers to the Funck-number.

'B.122'
In handwriting in pencil on the back. This refers to the Bartsch-number.

In the 'Editor's Note' to The Illustrated Bartsch, Robert Koch stated that 'In the 17th century a Nuremberg publisher named David Funck numbered 230 of these plates and issued a volume entitled Opera Hopferiana. The Funck-number '11' written on this print is probably written by a collector who identified the plate and marked it with its Funck-number.

The plate has been cut down at the top. In the original plate, there was a figure of Christ forming a finial to the monstrance which is illustrated in Bartsch, p.191, no. 122.

Historical significance: A monstrance is a receptacle in which the Sacred Host (consecrated bread in the form of a wafer) is exposed for adoration in the Roman Catholic church. At the annual feast of Corpus Christi, the Sacred Host is displayed in the monstrance during which it is held aloft by the priest in procession around the church and placed on the altar during exposition of the Blessed Sacrament in the service of Benediction. This service may take place at other dates apart from the feast of Corpus Christi.

Attribution note: This is a printed design for use in a goldsmith's or silversmith's workshop. It could also be of interest to print collectors in its own right as a representation of a particular kind of object.