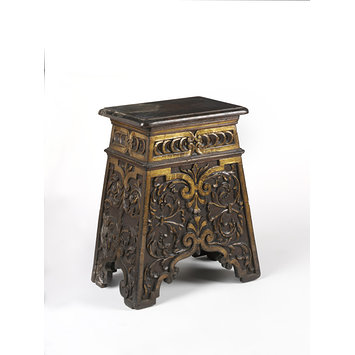 During the period 1500 to 1600 in Italy, stools were usually placed in more intimate settings than chairs, or for the use of less important members of a household in the hall. Like many surviving examples of this period, this stool and its pair (also in the Museum) have some replacement parts. It was acquired in 1891 from Stefano Bardini (1836 - 1922), the most famous Italian dealer of his day. His clients ranged from private collectors like Isabella Stewart Gardner of Boston and Albert Figdor of Vienna, to museums like the Louvre in Paris and the Hermitage in St Petersburg, as well as the South Kensington Museum, London (now the V&A).

Rectangular boarded stool with shaped apron; with a plain top (replaced), nailed internally, with moulded edge of fillet and ovolo, the four sides carved in relief with leafy scrolls (well undercut) on a punched ground within straight border bands and scrolls. Each panel has been cut along the line of the underside of the lower scroll to form four feet. With applied mouldings all round above (bevel and cyma reversa) and below (torus and cavetto) a freize with guilloche ornament centred on scrolls. The scrollwork bands gessoed and gilded, the leafy scrolls gilded without a gesso ground. The internal surfaces all plain, with marks of a jack plane and pit saw. The front and back boards have been cut from a single panel about 40 x 76cm wide which required an additional strip to be added to make up the height.

Condition
The seat replaced. The applied mouldings mitred at the corners (the joints somewhat opened) and have been chamfered across the corners, probably in the 19th century instead of a projecting angle. The gilding a mix of gilt and paint. Extensive wear on the feet. One of the glue joints on the long boards has been repaired.

Similar carved stools (all, apparently) with a hand-slot in the seat, are seen in 16th century illustrations, such as plates 266 (carved and probably partly gilded, dated 1594), 252 (plain without surface carving, dated 1570, and captioned 'bancette per sedere'), in P.K.Thornton, The Italian Renaissance Interior 1400-1600 (London 1991).

Thornton, p.168, differentiates this type of four-sided box or boarded stool (scagno, scanno, schanno) from the earlier milking-stool, staked type with turned legs fitted (and wedged) into a solid round or ocatagonal wooden seat. The overlapping board seat braces the structure, and arch shape 'feet' were cut into the lower edges of the flanking boards. 'A slot was often cut into the seat so one could slip one's fingers through and carry the box to where it was needed. This type of stool, made slightly taller, could also serve as a writing desk, or as a supper-table for a single person; if made taller still it could serve as a candlestand or support for busts or vases.' He cites a document describing a stool for Lorenzo de' Medici 'a small desk of walnut covered with leather on which one can sit.' Painted or intarsia decorated stools (where they appear in documents of the period) would have been this type of stool. Carved ornament became fashionable from about 1500, 'first with a rim round the cut-out at the bottom edge and then with increasing amounts of scrollwork, masks and festoons. At some point early in the sixteenth century joiners began to make two opposed sides more prominent while the other two sides were reduced in size to become mere inset bracing pieces [as here].'

This stool and its pair appears to be a relatively rare survival. 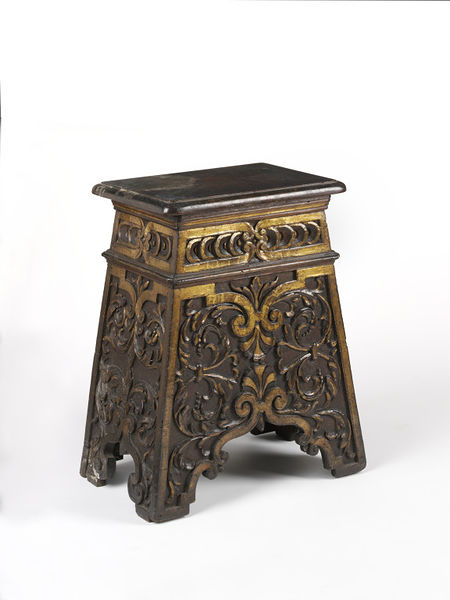