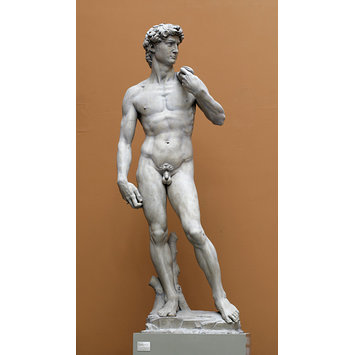 This plaster cast of the celebrated marble sculpture of Michaelangelo's David (now in the Accademia in Florence) was acquired by the South Kensington Museum (now the V&A) in 1857. It was presented as a gift to Queen Victoria by the grand duke of Tuscany, after he had prevented the export of an Italian renaissance painting by Ghirlandaio, which the National Gallery had hoped to acquire. The queen immediately presented the cast to the Museum, where it was initially displayed in the Art Museum. When the Architectural Courts (today known as the Cast Courts) were opened in 1873 it was shown there, along with other plasters after Michelangelo, and some of the other great sculptures of the Italian renaissance. This is where it can be seen today, an imposing and and arresting copy of one of the most famous sculptures in the history of European sculpture.

Given by Leopold II, Grand Duke of Tuscany to Queen Victoria in 1857.

Michelangelo carved the David from a block which had already been started by AGOSTINO DI DUCCIO (1418-before 1498). The David was installed in place of Donatello's Judith and Holofernes, outside the Palazzo Vecchio, in 1504. It was removed to the Accademia di Belle Arti in 1873, and replaced by a copy. The cast belonging to the Victoria and Albert Museum was presented to Queen Victoria by Grand Duke Ferdinand III of Tuscany, in 1856.

Plaster cast, painted plaster, after the marble of original of David now in the Accademia di Belle Arti, Florence, by Michelangelo, Florence, 1501-4. Cast by Clemente Papi in Florence, in about 1856.

Michelangelo's David is probably the most famous sculpture in the world, reproduced in countless copies, large and small. This life-size cast was a gift to Queen Victoria from the Grand Duke Leopold II of Tuscany. It was a peace offering, since the duke refused to export a painting which the National Gallery in London had hoped to buy. The cast was produced from a mould made up of several hundred pieces and is reinforced with metal rods.

Michelangelo carved his David from a single block of marble. David, slayer of the giant Goliath, was a symbol of civic freedom for the Florentine Republic. It was used by both the republican government and the powerful Medici family, who effectively ruled Florence. The statue was placed outside the Palazzo Vecchio until 1873. The marble copy that replaced it shortly afterwards still stands there today. [2014]

Plaster cast of David after marble original by Michelangelo, in 1501-1504, in the Accademia di Belle Arti 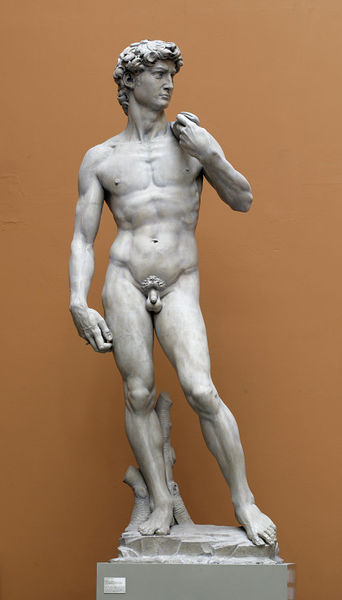