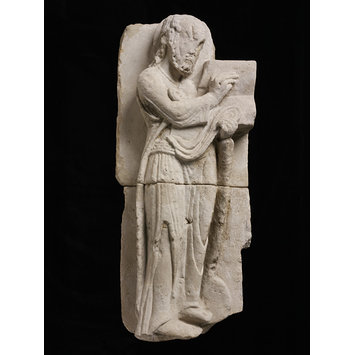 The relief together with A.3-1990 comes from the Augustinian priory at Ivychurch, Wiltshire. Their exact use is unclear: Zarnecki has suggested that the works may have formed part of a screen or may have been placed on the piers of a cloister, while Williamson has proposed that they may have been used to adorn the façade of the Abbey. The reliefs were later inserted into the wall of Ivychurch House, the post-dissoloution succesor to the priory.

St Peter bears his attributes as a bishop: the pallium (worn around the neck) and a mitre. The pallium was bestowed by the pope. The crosier represented pastoral
responsibility. The keys signified that entrance to Heaven relied on obedience to the church. The figure probably came from a screen in the Augustinian priory at Ivychurch, Wiltshire.

Peter became leader of the twelve Apostles and was the closest to Christ. When paired with Saint Paul as this figure was at Ivychurch Priory, the two represent the pillars of the church.

Relief. The figure is so evidently half-bald that it can safely be identified as St Paul. The sculpture was made from two well-fitting pieces of stone. The figure is nimbed and stands in three-quarter view in front of a lectern with a round base and an open book resting on top. St Paul holds a pen and is writing in the book, he is represented as a writer, an air of gravity and concentration on his face. He is dressed in a long robe with a slit and a belt; he holds two large folds of his cloak, one with the elbow of the right arm and the other in his left hand. There are delicate folds on the sleeve, vertical folds on one leg and oval ones on the other. The hair at the back of his head and the beard are arranged in small curls. The thin, drooping moustache adds to the solemn expression of the face.

The relief together with A.2-1990 comes from the Augustinian priory at Ivychurch, Wiltshire. The exact use of the reliefs is unclear : Zarnecki has suggested that the works may have formed part of a screen or may have been placed on the piers of a cloister, while Williamson has proposed that they may have been used to adorn the façade of the Abbey. The reliefs were later inserted into the wall of Ivychurch House, the post-dissoloution succesor to the priory. Removed from the house in 1982 for conservation carried out by W. Sobczynski the reliefs were loaned to the Victoria & Albert Museum from 1984 up until their purchase by the museum in 1990.

Romanesque sculptural styles were established in the southern England largely as a result of the patronage of princely bishops. Bishop Roger of Salisbury to whom the minister (later Ivychurch priory church) was granted by Henry I, built castles at Old Sarum, Sherborne and Devizes, as well as Old Sarum Cathedral (destr.), from which many important fragments remain, while Henry of Blois, Bishop of Winchester and brother of King Stephen, became an active patron of sculpture towards the middle of the 12th century. The remains of his elegant palace of Wolvesey at Winchester (Hants) have motifs closely related to local manuscript illumination. The intimate links between manuscript illumination and stone sculpture are evident in the fragments from the chapter house of St Albans Abbey (now Cathedral) and Zarnecki has suggested a link between this figure of St Paul and his appearance in manuscripts, claiming that this sculpture is based on the representations of Paul as a scribe sometimes painted at the beginning of the epistles, although in manuscripts he is shown seated rather than standing as he is here.

Paul was an Apostle although not one of the original twelve. Born at Tarsus in Cilicia (Acts 21:39), of a father who was a Roman citizen (Acts 22:26-28; cf. 16:37) he was Jewish by birth and originally named Saul. Following his conversion, his baptism, and the miraculous cure of his blindness, Saul set about preaching to the Jews (Acts 9:19-20). However in (Acts 13:1-14:27) he is set apart by command of the Holy Ghost for the special evangelization of the Gentiles and during his mission to Cyprus takes the name of Paul. As a devotional subject he is very often paired with the Apostle Peter either alone or on either side of Christ or The Virgin enthroned. In this arrangement they stand for the joint founders of the church, Peter symbolizing the original Jewish element and Paul the gentile. The appearance of these figures together, in the fabric of church architecture is not unusual, and demonstrates a literal interpretation of the Apostles' role as pillars of the church.

The priory of Ivychurch was founded in the parish of Alderbery, south east of Salisbury in Wiltshire. A small minster, a dependant chapel of Alderbery church , stood on the site before the foundation of the the priory and became the priory church. It was originally an Augustinian Priory of St. Mary. No foundation charter is known and the earliest evidence of the priory comes from the Hundred Rolls for 1274, in which the jurors of Alderbery name King Stephen as the founder. The priory was certainly a royal foundation and the fact that it is mentioned in the first pipe rolls of Henry II seems to confirm the jurors claim. Never receiving great endowments the priory nevertheless enjoyed privileges in the adjacent royal Clarendon Park. After the Dissolution it came into the hands of Henry, Earl of Pembroke, who converted it into a dwelling, which was later occupied by royalists during the civil war. Much of the priory building including the original twelfth century cloisters remained standing until 1888 when it was pulled down. A farm house with many reclaimed sculpted stones now stands on part of the site and it was on the outside of the end wall of this house that the figures of Saints Peter & Paul were positioned.

SAINT PAUL
Oolitic limestone (Portaland Stone)
ENGLISH; about 1160
From the Augustinian Priory at ivychurch Wiltshire
Purchased with the assistance of a contribution from the National Art collections Fund (Eugene Cremetti Fund)
A.3-1990

This relief together with that showing St Peter on the adjacent pier perhaps originally formed part of a choirscreen or may have been set into the façade of the priory church at Ivychurch. [1995] 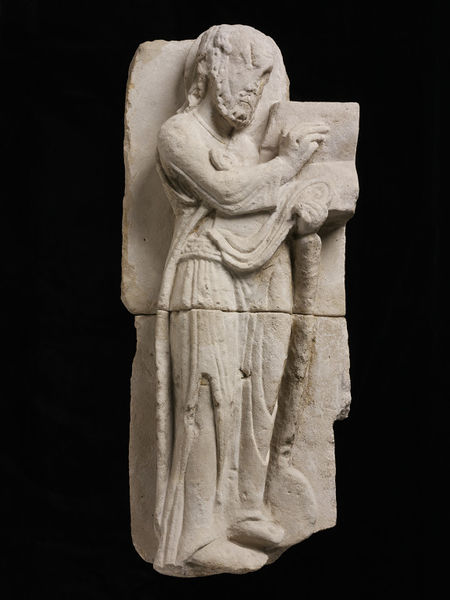