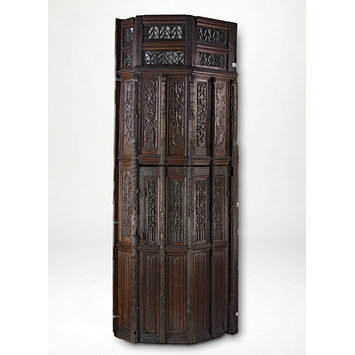 This section of panelling, and another very like it, also in the Victoria and Albert Museum's collections (672A-1895), would have been built into two corners of a room and probably led to internal staircases. Both incorporate a low hinged door with the remains of a latch and bolts which indicate that the door could have been fastened either from the room side or the staircase side. Fixed woodwork like this added privacy and comfort, by reducing draughts and noise. A variety of fashionable motifs has been carved on the exterior faces as well as more traditional linenfold ornament. Such a mix of styles on decorative objects was not unusual in northern Europe at the time.

Internal vestibule from the corner of the room, of three storeys and a cresting, containing a hinged jib-door, of frame and panel construction. In plan the vestibule forms two and a half sides of a regular decahedron.

It consists of a structural framework with two full-height stile-buttresses, each with a pentagonal footprint and decorated with carved crockets and various types of scale and twig pattern, and at the left side a plain return (originally fixed to the wall of a room). The left hand stile buttress is pierced about 10cm above ground level with an angled hold, presumably for a dowel to fix the unit to floorboards. Two horizontal rails with doubled caveto mouldings divide the three main storeys of panelled decoration from each other, and a cyma and cavetto moulding sits below the cresting. The eight-panelled jib-door is of canted form corresponding to the foot-print of the vestibule. The lower rail consists of a series of cyma mouldings, much abraded.

The cresting (of six panels) sits between two concave moulded rails (four of the six sections are copies (probably 20th century) based on two short older, but probably not original sections of rail), and consists of two rows of panels with pierced tracery, (assembled in June 2006 using intact parts from 672-1895 and 672a-1895); the six panels are held from behind with metal fixings not in conventional grooves. (The physical and stylistic divergence of the crest panels from the rest of the vestibule suggests that the cresting is a nineteenthth-century replacement (probably using some older woodwork). Similar vestibules illustrated in sixteenth-century manuscripts or prints show crestings close in form and decoration to 672a-1895, usually with pinnacles surmounting the buttresses. Pierced panels would have permitted some light inside the vestibule and stairway when closed.)

Description of the panels
The third (top) storey consists of five tall panels (sight size 77 x 17cm) of quartered oak (probably split and planed) with plain edges, and held in grooves in the moulded edges of the stiles and top rails. They are carved in low relief. From the left, panel 3.1, (ie first panel from the left of the 3rd storey), a fox facing left on hind legs below a stylised vine with leaves (nicely undercut) and grapes, on which perches a pigeon-like bird pecking at grapes; panel 3.2 a vertebrate, renaissance style vase design with symmetrical dragon heads supporting a vessel on which stands a blemya (anthropopaghus) on whose head stands a naked man holding plant tendrils; panel 3.3 (with a long, vertical split) a dragon facing left on hind legs swallowing a plant stem with spiky leaves and 3 flowers, in which perches a pigeon-like bird; panel 3.4 a wolf(?) facing right swallowing a thistle-like plant stem with spiky leaves and 2 flowers on which perches an eagle; panel 3.5 a vertebrate vase design with a boar facing right with head turned left on hind legs swallowing the foliate body of a male figure, supporting a vessel with two downward facing wolves, atop which a dragon with wings outstretched supports a leafy stem with a composite figure (human head and dog's hind legs) perching.

The second storey of 5 tall panels of blind tracery with stylised flower bosses (the designs varied), 4 of them part of the jib-door which hangs on 2 original pintle hinges, with the following ironwork fittings: a pierced iron strap nailed around the top corner with traces of textile underneath, and an iron latch fitting nailed with textile surviving underneath, an iron latch housing, on the inside of the door an iron latch on a ring fitting nailed; panel 2.1 (76 x 17cm sight size); panel 2.2 (66 x 11.5cm), with a non-original iron fitting that probably served as a pull; panel 2.3 (66 x 16cm); panel 2.4 (66 x 16.5cm); panel 2.5 (66 x 11.5cm).

With a dark stain overall. No evidence was found of painted decoration.

It is recorded as no.7 on J. Hungerford Pollen's report on the Peyre Collection, Feb. 1889 (Peyre Papers, appendix A), with an annotated sketch: "French Carving. Large Structures - Hexagonal enclosure in two halves. Parts of a screen or internal porch (such as the Oudenaarde panelling in S.K.M.) Panelled in three rows. Linen pattern below. Pierced crestings in two rows. (about 10 ft. high & 3 ft 6 wide)...These [ie nos. 7 & 8] are from Tours." The sketch annotated "Panels - Linen. Panels - arabesque. P. cresting. Pierced cresting".
On the list C (Typed inventory of the Peyre Collection) it is recorded as item 90 "Two half tambours, Gothic 4 panels each", and on the list B of disputed items (during the negotiations) that the Museum specifically stipulated to be included in a revised deal, they are listed as 'Two tambours and the arch between them", which refers to item 91 (673-1895), associated with the two vestibules in Peyre's house, where they were exhibited together in room G (the large ground floor room facing the street), but not historically ensuite with them.

An entry in Peyre's own ledger (held at the Musee des Arts Decoratifs, no listing no. was been assigned to these documents, spring 2007) appears to relate to the two vestibules, to their purchase from Paul Récappé. Meubles et Curiosités. 9 Passage Ste Marie: "Recappe 17 Fevrier 1877. Les deux tamboures/d'Escalier avec frais divers 5300 [the 5 not quite legible]." A bill from Récappé seems to suggest a price of 10,000 francs for one tambour, but this is not certain. Note that the valuation cited in 1895 (Peyre VA papers, appendix F) by the Museum gives 7578 francs, commuted to £300.

It is noteworthy that a domestic origin of these two vestibules was not always taken for granted. A letter from J.H.Fitzhenry to Sir Cecil Smith, rec’d 3 Jan 1912, deals with the possible purchase for the Museum of a similar object. Fitzhenry wrote offering to buy a linenfold ('napkin pattern') ‘drum’ [ie tambour, vestibule] from ‘an Abbeville mansion’… ‘to hold stairs in the corner of some large room, & "dissimulate" it'... ‘in excellent state’, purchased from Heilbrunner(?) ‘(from whom I have purchased nearly all my “Big” architectural specimens)’. …’I am thinking of “giving” it to you, as it would look very well near the Morlaix staircase.’ The size is ‘quite 20 ft high & about 10 or 12 diameter’ and that the price £400 could be negotiated to £200. In a Museum memo, Lehfeldt (11 Jan 1912) writing to the director in response and advising against the offer, referred to 672 &a-1895 as being similar in size, ‘wh: formerly enclosed the stairs leading to the rood-loft of a French church. …[now] shown in room 7 – are decorated in a more varied manner than the one now offered”.

This type of boiserie seems to have been relatively common in chateaux interiors c.1450-1540 in northern Europe, on the evidence of illustrations of interiors of the period, although very few survive in situ. Examples are the chateau de la Roche-du-Maine (commune de Prinçay, Vienne, c.1525). In France it was known as a 'porche' or 'tambour' [drum]. It enclosed the foot of a staircase within a panelled room, insulating the room from cold air, and noise on the stair, and could also permit access to an adjoining room. Illustrations show that the panelling and cresting might be part of a larger ensemble lining the walls of the room. Pierced panels high up would allow some light into the stairwell. Ironwork bolts on the V&A examples would have permitted the jib door to have been fastened from within the room, or from the staircase.

The style of 672 and 672a-1895, acquired together and undoubtedly a pair from a house in Tours, according to Peyre, accords with other woodwork from Picardie and Normandy, where late gothic (buttresses, pinacles, tracery) and renaissance elements were combined during this period. The scenes of beasts hunting birds on vines perhaps derives from book illustrations of the period. 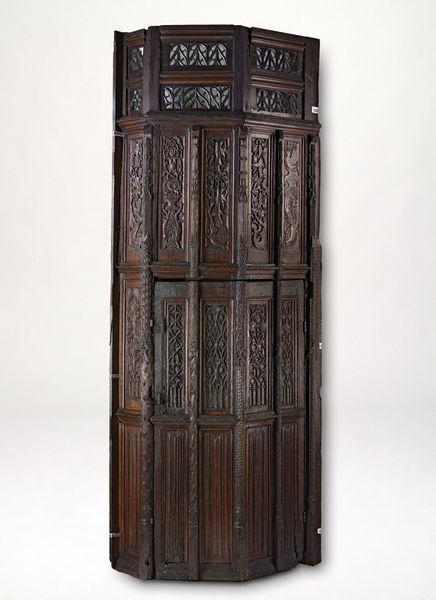