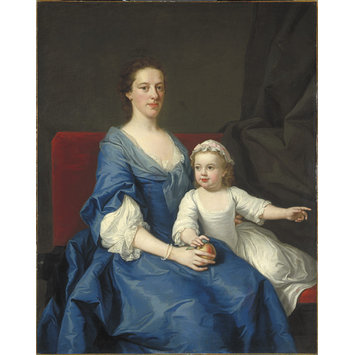 Portrait of an Unknown Woman and Child

The portrait shows an unknown woman and child, seated on a settee. The woman is holding an apple, which the child touches with its right hand while appearing to point at something beyond the frame with its left. The child’s dress and the pink ribbon on its cap do not necessarily indicate a girl. Until the 1920s, it was the custom for boys to wear dresses until they were ‘breeched’ (given their first pair of trousers), sometimes as late as eight or nine years old. The identification of pink with girls and blue with boys, mainly in Europe and the United States, did not take hold until the early 20th century and is of uncertain origin.

Portrait of an unknown woman and child in oil on canvas, in a later gilt and beaded frame. The woman is dark eyed and her upswept dark hair is brushed away from her face; she wears a low-necked dress of petrol blue silk over a white chemise, one sleeve of which is visible showing the ruffle of Flemish lace which matches that at the neck. She wears a fichu of sheer fabric (possibly a silk muslin) around her shoulders, and a double string of pearls about her right wrist. The child, who has blue eyes and short fair hair, wears a scoop-necked back-fastening dress of white fabric, with short sleeves, a long waist, and a full skirt; the garment is finished with tucks at the sleeves and hem, and is worn with a lace-trimmed chemise and a round-eared white cap trimmed with pink ribbon. The woman is seated on a red-upholstered settee, with a curtain of feuille mort coloured fabric draped across one end; she has her left arm around the child, who is seated beside her. She is holding an apple, which the child touches with its right hand while appearing to point at something beyond the frame with its left.

Bought at Phillips' Sale of Early British and Victorian Paintings on 16th December 1997, lot 23 (illustrated) as attributed to Joseph Highmore.

Imported from Canada. Said to have been sold to the Canadian vendor by a London dealer, Monty Bernard.

Historical significance: In an e-mail to Mark Evans of 20 May 2011, Bendor Grosvenor pointed out that the pose of the mother and child is virtually identical to those of the corresponding figures in the group portrait of 'Sir Robert and Lady Smyth with their Son, Hervey', in the Yale Centre for British Art, dated 1738-9 and attributed to Andrea Soldi (Ingamells, 1978-80, pp.15-16, no. 58a & plate 4b). Grosvenor observed:

"Probably your picture is about the same date...the handling of the drapery is a particular giveaway for Soldi, especially the vivid blues and whites, which are usually crisply painted. Soldis have, in my experience, a very different pitch of colour to the prevailing English school in the early 18th C, which is why we can certainly rule out an attribution to Highmore. Is your picture in a good state? Soldis usually are...probably something to do with his generous application of paint.We had a good example of a Soldi...of Lord Dacre...which shows a similar handling in the drapery to your picture. He also had a peculiar way of drawing faces - his sitters often carry a slightly odd grin - which you can see in both the Dacre and your picture (and Lady Smyth)."

Formerly attributed to Joseph Highmore (1692-1780), in 2011 the painting was convincingly re-attributed by Bendor Grosvenor (see History 2, curator's comments) to Andrea Soldi (ca. 1703-71), a Florentine painter who arrived in London in 1736. Visiting French and Italian painters, like Philip Mercier (1689/91-1760) and Jacopo Amigoni(1685-1752), were favoured by Frederick, Prince of Wales, and Soldi enjoyed considerable success with artistocratic patrons. His 'freely and well drawn' portraits were prized for their attractive light colour, 'well immitated Silks Sattins Velvets', and flattering and original presentation. Success rather went to Soldi's head; in 1744 he was described as having a 'high mind and conceptions grandisses willing to be thought a Count or Marquiss, rather than an excellent Painter', and was imprisoned for debt. Thereafter, the social standing of his patrons declined, and Soldi's popularity waned in the face of competition from a younger generation of British artists, including Sir Joshua Reynolds (1723-92), who reputedly paid for his funeral.

Painting of a mother and child, probably painted by Andrea Soldi in England around 1740

Published as attributed to Joseph Highmore in Oil Paintings in Public Ownership in The Victoria and Albert Museum, Public Catalogue Foundation, London 2008, p.21.
For Andrea Soldi see John Ingamells, 'Andrea Soldi - A Check-list of his Work' in The Walpole Society , vol.47 (1978-80), pp.1-20, esp. no. 58a. 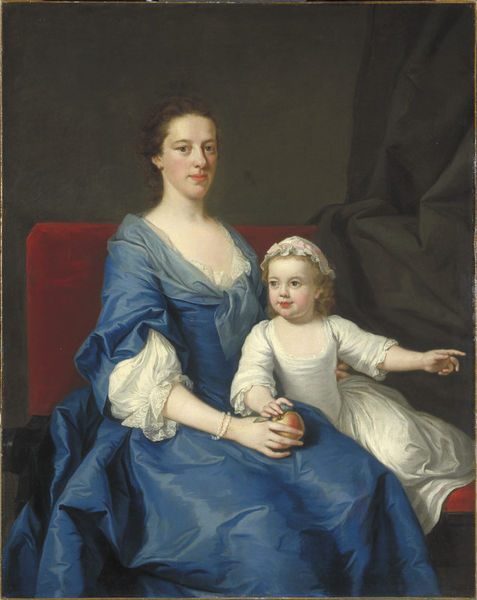