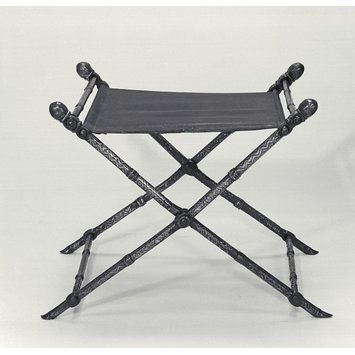 Folding stool, wrought iron, with inlay of copper and silver, and knobs and bands of copper with traces of gilding. It is of X form, composed of bars of hexagonal section hinged at the centre. The crosspieces terminate above in rounded but slightly faceted knobs decorated on one facet, and below with animal hoofs. The leather seat is a modern replacement. The two pairs of straight legs are each joined with a stretcher towards the base, and at the top are each joined by a cross bar, one of which holds the leather seat. Each stretcher, cross bar and leg has two plain moulded collars along its length. Each join terminates in a rounded moulded knop. The inlaid decoration comprising a feathered-edge decoration in zig-zag line, x and lozenge shaped, spiral lines and strapwork.

The date of this stool remains a puzzle and continues to be debated, as it appears to be later than other comparable examples, See Bibliography. In form it resembles a group of folding stools of the 6th and 7th centuries. These have been found in a wide area, ranging from France, the Carpathian basin, to Italy and one to North West Iran. It is thought that they may have been produced in the Byzantine sphere of influence, quite possibly in northern Italy. More recently it has been suggested that they may have been produced in Rome. The currently-known comparable examples all have decoration that is more complex and varied than that on the V&A example. 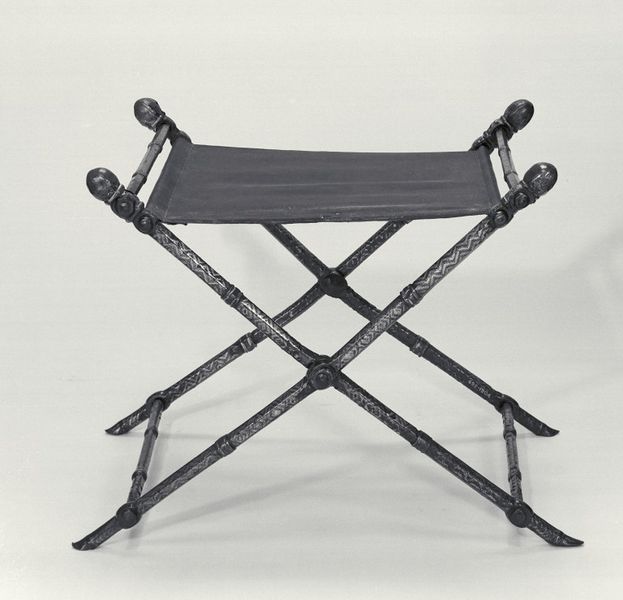