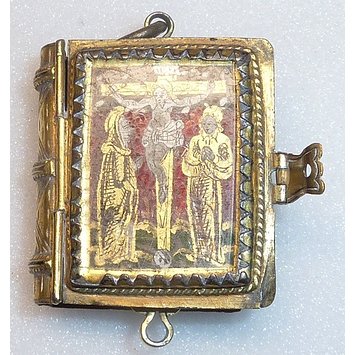 This pendant has been described as a reliquary, and it recalls little sixteenth-century enamelled gold devotional books that hung from the girdles of their owners. The V&A pendant is very similar to an example in the Courtauld Gallery (bequeathed in 1966 by Mark Gambier-Parry; museum no. O.1966.GP.274), both pair the crucifixion with the Lamb of God on the front cover. There is also an example with Old and New Testament iconography in the Walters Art Museum (accession no. 46.1), and two pendants with Old Testament iconography mixed with unidentified images of secular figures have appeared recently on the art market (Artcurial: Liuba & Ernesto Wolf Collection, lots 86 and 87, sold 1 December 2014). The imagery of a similar pendant also in the V&A (M.66-1923) also lacks an obvious devotional focus. These book pendants all have suspension loops at the top and base of the book, which could suggest they were in fact strung on a rosary rather than suspended at the wearer's neck or waist. While the quality of the painting on the glass panels is often high, that of the metal mounts for these panels seems crude by comparison, and the scenes depicted on some of the panels sometimes appear to have been cut down. This suggests they were not originally designed for the rectangular shape of the book which encloses them. None of these hollow books appears designed to hold relics, as these would have obscured the imagery on the reverse painted glass panels set inside. These inconsistencies make it difficult to assign a definite function and date to the pieces.

Small silver-gilt case in the shape of a book, set on the front and back with four reverse painted glass plaques, placed back to back with one another. On the front cover, an image of the crucified Christ with the Virgin Mary and St Mary Magdalene standing at either side of the foot of the cross; the plaque placed inside the book, on the back of this one, represents Jesus as a Lamb. The back cover of the book is set with an image of the Christ Child as ruler of the world; the panel set back to back with this one, on the inside, is too damaged to be decipherable. There is a loop attached to the top of the case, and another to the base.

The Museum purchased the pendant in Nuremberg for £4 from Mr A. Picart. It was described as a 'locket or reliquary' when it entered the South Kensington Museum.

Small silver-gilt case in the form of a book, with religious scenes in reverse painted glass set into the front and back, and on the inside. Probably Germany, the glass plaques possibly 17th c, the metal mounts probably 1800-1870. 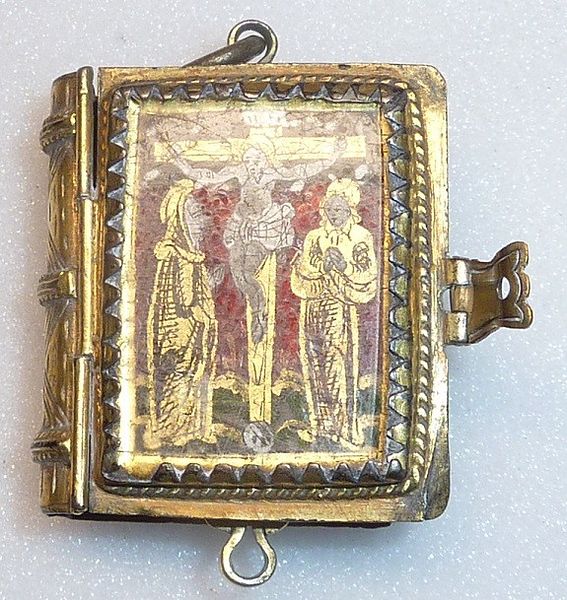