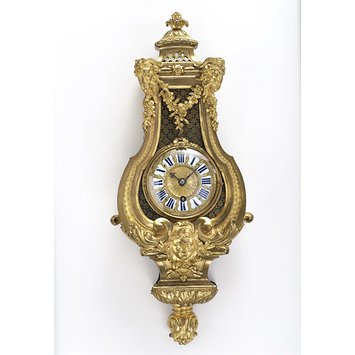 A wall clock for display in a bed alcove with a repeater mechanism for striking the nearest hour on demand using strings pulled from below through two holes pierced on each side. They activated a chime so the owner could hear the time when the room was dark. The clock is in the form of a lyre, a musical instrument associated with Apollo and symbolic of the reign of Louis XIV of France, the 'Sun King'. The movement was made by Louis Mynuel appointed Royal Clockmaker to Louis XIV in 1705; the case is attributed to André-Charles Boulle but it is probable that the movement and case are a later marriage.

A clock was a collaborative production, probably assembled in Boulle's workshop. The clockmaker produced the movements; a sculptor designed the model for the case, a bronze caster produced the mounts, which were finisheded by a specialist chaser and gilder. An enameler would paint and fire the enamel numbers on the dial, each of which was inserted individually.

Case: A gilt-brass lyre-shaped case with acanthus floral finial; the upper section mounted with two rams' heads supporting festoons of flowers; the lower section adorned with a female mask; the space around the dial is filled with marquetry of gilt-brass and blue-stained horn. The lyre rests on a straight bracket with foliate decoration and acanthus drop.

Dial: The brass dial has an engraved outer minute ring, the minute marks replaced by small arabic numerals every 5. The hours marked by inset plaques of white enamel with roman numerals in blue; there are applied cast decorations around the plaques and in the centre of the dial. A ring of quarter-hour marks is engraved within the hour plaques. Simple winding hole pierces the upper part of VI. There is a regulator hole between XII plaque and 60 mark. Steel hands.

Striking Train: This is the old French design of repeat strike in beautiful condition. The system is on three bells probably E A C notes.
On pulling the strike chord
The last hour strikes on E

In this particular movement, Mynuel did not put in the strike actuating lever for the final '1 on C' in the 4th Quarter and so the strike for the Quarters was planned according to the first option.

WALL CLOCK (Cartel)
Gilt-bronze and boulle marquetry
PARIS, about 1710-20
130-1865
This is a pendule d'alcove, a clock for placing above the bed. It has a repeater mechanism to avoid disturbing the sleeper. The nearest hour is struck when strings are pulled. They formerly hung down from the holes on either side of the case.
This is an early example of a case made almost entirely of gilt-bronze. The lyre form, with the female mask and the diaper-work marquetry panel of blue-stained horn and brass are characteristic of the Régence style. The clock maker (horloger) Louis Mynuel was granted a royal appointment in 1705. He is known to have made movements for clock cases by Boulle and this example may be one of them. [1960-1970]

Louis Mynuel became marchand-horloger privilégié du roi suivant la cour (privileged merchant clockmaker attendant upon the court and counsels of his majesty) on 19th May 1705 on the resignation of Florimond Riollet. Born in Dieppe, son of Jacques, merchant goldsmith. One of the most important clock makers of his time for both the excellence of his movements and his prestigious clientele. He made the movement of the Apollo chariot clock, which belonged to the princes de Condé. His work was also acquired by the courts of Parma and Sweden. Mynuel made clocks for cases supplied by Andre Charles Boulle. Such a reputation created a market for copies and fakes.

Parts of the case are from different periods; the rams' head masks date from the 1760s; the other sections are probably 19th century reproductions although the central mask and finial are of good quality. In an early 18th century clock, the movement would have been contained within a polished back. This clock was made in the period 1830-1860 with the intent to deceive. The central dial does not fit the case. The surface chasing is too precise and busy for early 18th century work. 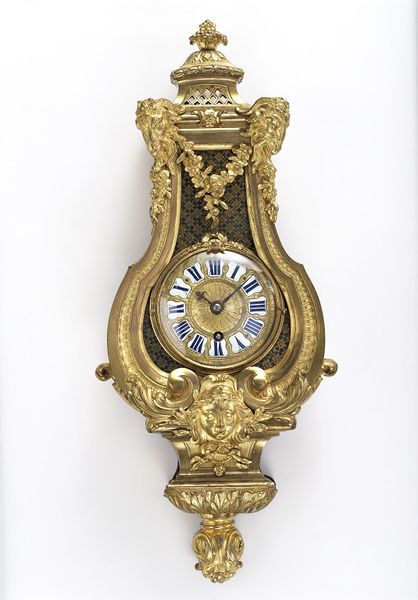