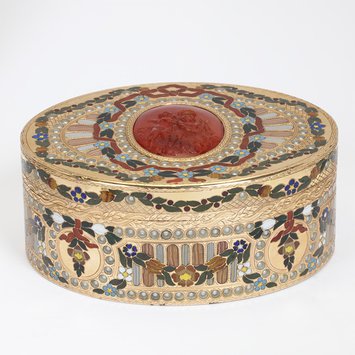 This box in the neo-classical style was made by Johann Christian Neuber of Dresden. In 1782 he was described as making 'with extraordinary dexterity, different kinds of galanterie items [fashionable objects] including very fine snuffboxes set with rare stones; his pieces worked in mosaics are particularly admired by all connoisseurs' (Karl Wilhelm Dassdorf, Descriptions des curiosités de Dresde, quoted in Alexis Kugel (ed.), Gold, Jasper and Carnelian: Johann Christian Neuber at the Saxon Court, London, 2012, p. 101).

Neuber was born in Saxony in 1736. He was apprenticed to a Swedish goldsmith resident in Dresden, Johann Friedrich Tectaon, in 1752. He submitted his masterpiece in 1762 and from the late 1760s was making work for the Court. He later acquired the title of Court Jeweller, which was not an exclusive title and was awarded to several of his contemporaries. He became celebrated for his gold boxes set with hardstone in gold cells (Zellenmosaik). Some boxes are composed of numbered specimens of the stones found in Saxony, miniature geological collections, while others, like this example, use some Saxon stones, like the banded agate rays, as well others from international sources, such as lapis lazuli, which probably came from Afghanistan. His work was sold in Dresden and, twice yearly, at the Leipzig fairs where he offered a wide range of stone-set work as well as items made by others including medallions by Wedgwood.

The cameo can be released from the lid by pressing a concealed push in the case (see description). Although there is little space in the cavity which is revealed, it may once have contained a miniature. Some Neuber boxes have concealed compartments - on the lid, inside the lid, or inside the base - which contain miniatures, or, in the case of those boxes which have numbered specimens of Saxon stones, catalogues of the individuals stones.

Oval gold box engraved and inlaid with hardstones, garnet and glass. On the lid an oval carnelian cameo of a a putto crowning with a wreath a putto playing a lyre is framed by an engraved gold guilloche band and an oval of simulated pearls of characteristic Neuber type made from rock crystal cylinders, which are flat on top, and on the base have hollow hemispheres filled with a silver precipitate. Outside the pearls, a wreath of bloodstone leaves with turquoise flowers, which have centres of opaque yellow glass, around which is intertertwined a ribbon carnelian surmounted by a bow. Outside the wreath, radiating panels of banded agate, alternating grey, black and white and red and white. The grey, black and white panels have some colourless material and they have been set over black material to provide definition. The red and white panels have been set over a red material to enhance the red. The red and white agate is from the agate vein of Schlottwitz in Saxony.

Outside the radiating agates is a further line of rock-crystal simulated pearls, and then festoons of bloodstone leaves which have red garnet berries, enhanced by being set on the same red material used behind the carnelian. The festoons also include flowers in profile inlaid with banded and mottled red jasper and flowers with lapis lazuli petals and yellow glass centres.

Similar festoons run around the sides of the lid and of the body of the box, where they hang across banded agate rays, and are looped between circular reserves bounded by simulated pearls and centred by pendant flowers suspended from carnelian bows and set with bloodstone leaves, banded jasper petals and yellow glass centres.

The decoration of the base is similar in design and inlay to that on the lid, with the exception that the central oval is gold decorated with a blue lapis lazuli ribbon from which hang a flaming torch, a box and a quiver with bloodstone leaves. The bow and quiver are made of two varieties of brown jasper. The torch, like some of the flowers around the sides, is made of white chalcedony which has been set over a white ground. The feathers of the arrows are inlaid with the same grey and white agate as is used in the rayed sections on the lid, but it appears whiter because it has been laid over white material.

Throughout the design the veins of the leaves, and the creases and edges of the petals, ribbons, torch and quiver have been engraved.

On the right of the front side of the box, just below the rim and above the banded brown jasper flower on the right, a small rectangular gold push, not readily visible, can be depressed. This releases a catch which holds in place the central cameo on the lid. The cameo is backed in pink silk and the base of the cavity in which it sits is lined in pink silk. The lever which releases the cameo can be seen in the X-ray image of the lid running from the right side of the lid to just above the cameo, with a pivot near the middle. If the push is depressed, the far end of the lever is raised and releases the the cameo setting.

Bequeathed with the Jones Collection to the South Kensington Museum, and accessioned in 1882.

Oval gold box engraved and inlaid with hardstones and glass, and mounted with a carnelian cameo of a putto crowning with a wreath another putto holding a lyre, by Johann Christian Neuber, Dresden, 1775-80 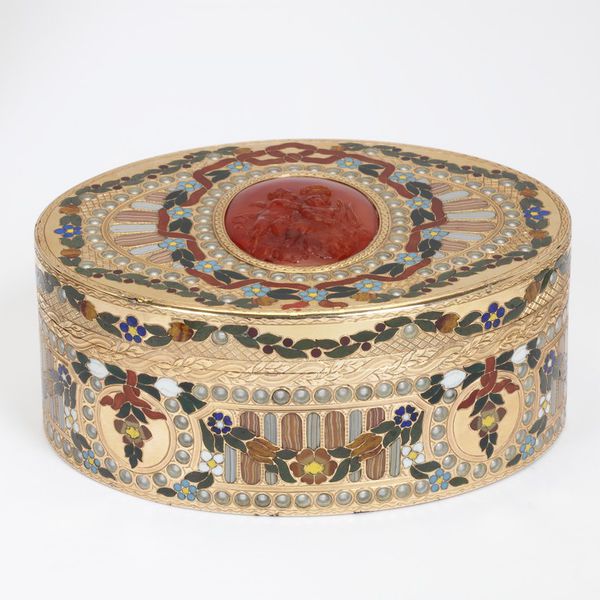