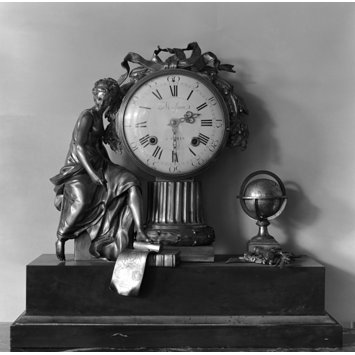 A neo-classical mantel clock supported on a fluted column plinth and surmounted by an oak garland tied with ribbons with the gilt bronze figure of Urania, Muse of Astronomy with her left foot resting on an astronomical diagram and, to the right of the clock, her attributes, the celestial globe and telescope, the movement signed by Denis Masson, Paris (working 1744-1778) and the dial enamelled by Elie Barbezat, who has signed the reverse. The clock, gilt bronze figure and globe are mounted on a limestone base.The clock movement was made 1746, in the year in which Denis Masson was received as Master Clockmaker in the Paris Guild of Clockmakers. The case probably dates from 1760.

A 'gout grec' mantel clock supported on a fluted column base and surmounted by an oak garland tied with ribbons. To the right a gilt bronze seated figure of Urania, the muse of Astronomy, with her left foot resting on an astronomical diagram, with, on the other side of the dial, her attribute the celestial globe. The dial is named 'Masson A Paris' . The movement is engraved 'Denis Masson a Paris', dating from 1746 and the dial is signed on the reverse 'Elie Barbezat', who worked during the reign of Louis XV. The clock, gilt bronze figure and globe are mounted on a limestone base. Mainsprings both inscribed 'Richard Mai/Juin 1773'.

Paris (There were eight clock makers with the family name Masson recorded as working in Paris during the 18th century. Denis Masson was an 'ouvrier libre' in 1744 when he was working near the Abbey St. Germain-des-Pres. He was received as Master on 1st March 1746 and by 1747 is recorded with premises on the Pont Notre Dame. In 1778 he was recorded in Rue Sainte-Avoye. He died in Paris on 7 March 1784., Made)

The clock mechanism is of brass with an enamelled dial. The supporting figures are cast and chased in gilded bronze. Both the mechanism and the figures are supported on a limestone base

Masson A Paris
Masson in Paris
inscribed on the dial

Elie Barbezat
signed on the reverse of the dial. This is the name of the enameller.

This clock was among a large collection of furniture, porcelain, metalwork, paintings and books owned by the tailor and businessman John Jones, and kept in cramped conditions at his house at 95, Piccadilly. In his will of 4 December 1879 and in a codicil of 22 January 1880, Jones bequeathed the objects to the South Kensington Museum, and they were transferred there after his death in 1882. The Handbook to the Jones bequest, published in 1883, marvels at the value of the gift, which seems still not to have been displayed to best advantage: 'Probably a large majority of those who visit the Jones collection will be indisposed to believe ... that so limited a space as three not large galleries in the Museum can contain furniture and decorative arts worth no less than a quarter of a million of money'. Jones' principal collecting interests lay in French eighteenth-century furniture and decorative arts, of which this clock is a splendid and rare example, as well as reflecting the late-Victorian love of rich, gilded surfaces and historical artistic styles. One of sixteen clocks bequeathed to the South Kensington Museum by John Jones.

Mantel clock. Gilt bronze and limestone. The gilt bronze seated figure to the left of the dial represents Urania with her attribute the globe to the right. Movement engraved "Denis Masson A Paris" made 1746. Dial painted 'Masson / A Paris' and on the back 'Barbezat'. Mainsprings both inscribed 'Richard Mai/Juin 1773'.

This mantel clock utilized an earlier movement signed by Denis Masson with a case in the 'Gout Grec' style with bronze sculpture representing the mythological figure of the muse Urania. 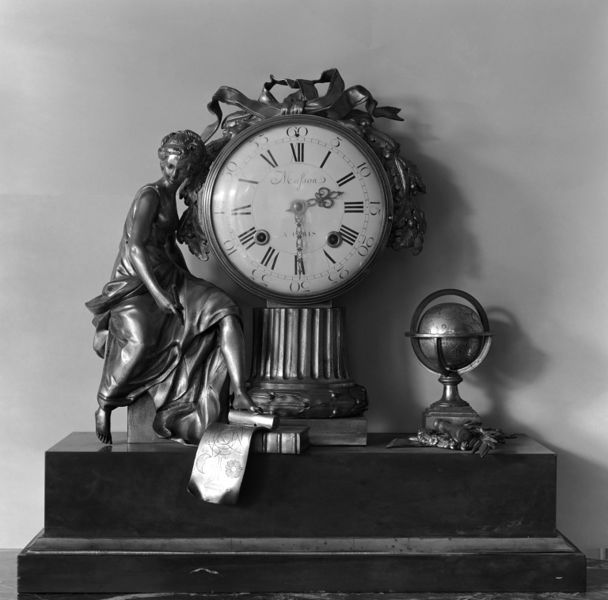