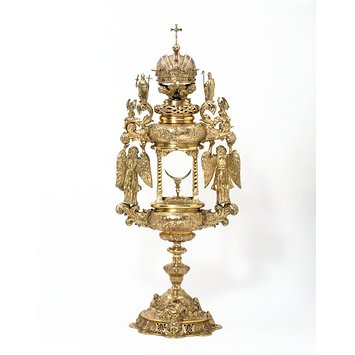 Silver-gilt, repoussé and chased. On the foot are shields depicting the four Evangelists and the Doctors of the Church, together with the Transfiguration; the stem is decorated with cherubs and the body, which is flanked by angels, is chased with Biblical scenes. The monstrance is surmounted by a jewelled crown and cross guarded by bishops.

Height: 101.5 cm Base to top of cross finial, Width: 41.5 cm From outer wing of left angel across to outer wing of right one, maximum width, Diameter: 31.4 cm Across widest part of the foot

A monstrance is an object which unambiguously proclaims Catholic belief: it displays the consecrated wafer of unleavened bread (the Host), which Catholics believe, miraculously becomes the body of Christ during the Mass. Haarlem, the second largest Catholic community in the Northern Netherlands after Utrecht, had escaped the violence and destruction carried out by fanatical protestant reformers in 1578. The 1579 Union of Utrecht had guaranteed freedom of religious conscience for all, but Catholics in the United Provinces (of which Haarlem is a part) were still treated with suspicion, and practiced their religion with difficulty. Nothing is known of the circumstances behind the commission of this monstrance, but the scale of this piece suggests the failure of the Haarlem authorities to suppress catholic practices in the city, a failure reflected in the persistence of the Catholic religion elsewhere in the Provinces. Jan van der Pille (active c. 1665-1705), the Haarlem goldsmith who made the monstrance, made other pieces of Catholic silver as well as vessels for secular use.
The Museum purchased the monstrance from the Edinburgh goldsmiths and retailers Hamilton and Inches in 1874.

Central to the Catholic faith is the belief that aconsecrated wafer of unleavened bread (the host) becomes the body of Christ during the Mass. Sometimes the host is displayed in a monstrance, so that Catholics can meditate upon the miracle. Haarlem in the Dutch Republic, where this monstrance was made, was officially Protestant, and the authorities suppressed Catholic practices. Catholics there could worship the host only in secret.

Gilded silver, with enamel, garnets, turquoises, rock crystal and imitation pearls [09.12.2015]
Monstrance
1674
The belief that a consecrated wafer of unleavened bread (the Host) miraculously becomes the body of Christ during the Mass is central to the Catholic faith. Sometimes the wafer is displayed in a monstrance, so Catholics can meditate upon the miracle. Haarlem catholics adored the Host in secret. The city was officially Calvinist, and the authorities suppressed Catholic practices.
North Holland (Haarlem)
Made by Jan van der Pille
Silver-gilt, decorated with white enamel, garnets, turquoises, rock crystal and pearl simulants
Museum no. 303-1874
[2013] 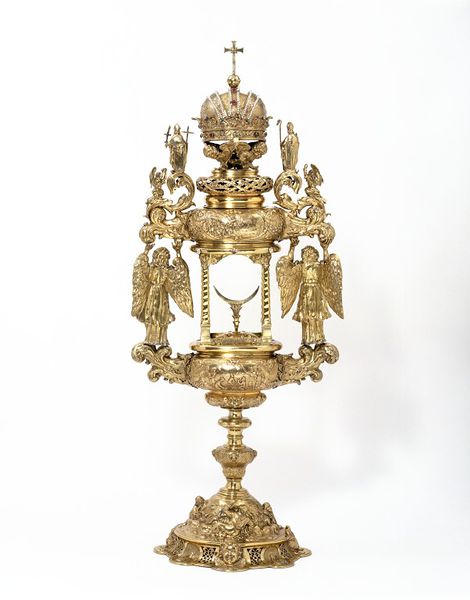