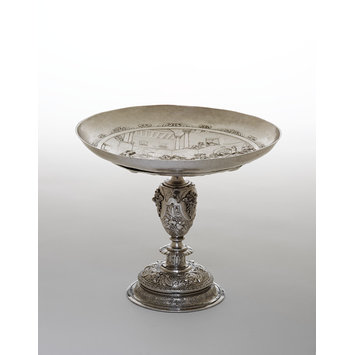 The maker's mark (monogram 'AV') on the outer rim of this silver vessel is almost certainly that of the Dutch silversmith Adam van Vianen (d. 1627). Adam spent his entire life in or around Utrecht, where he initially trained as an engraver. This shallow bowl on a footed stem, a type of vessel referred to by the Italian term 'tazza', is one of the earliest examples of Adam's work and it dates from 1612. Its form and decoration owe much to sixteenth-century styles of ornament inspired by the Classical Roman world. However, the flowing, flattened faces round the foot, and the curious motifs between the scrolling leaves that frame the central scene in the bowl, foreshadow the fluid forms that would make Adam famous. He and his brother, Paulus (who worked at various prestigious European courts) became famous for their fantastically-formed silver cups, vases and dishes (a style which modern scholars refer to as 'auricular').
Tazzas were originally made in glass, in sixteenth-century Venice, but goldsmiths soon copied the form in precious metal. Sixteenth and seventeenth-century paintings show glass and metalwork tazzas being used to drink wine at table, or to serve delicacies such as biscuits, candied fruits, or fruit. The detailed scenes which decorate the bowls of precious metal examples suggest that many were also objects to be displayed and admired.

Silver, raised, embossed and chased, the bowl of the tazza embossed with the Old Testament scene 'The Judgment of Solomon' (3 Kings 3, verses 16-28).

Four marks on the outer rim of the bowl, two below and two overstriking the zig-zag assay mark. From left to right these are:
Maker's mark 'AV' for Adam van Vianen; lower-case 't' in a rectangular punch, 1795 tax mark for Utrecht; the town mark of Utrecht, a shield in a circular punch (overstrikes the assay mark); the date-letter for 1612, an R in a shield-shaped punch (slightly overstrikes the assay mark).
For the maker's mark see: Houtzager (1970), no. 23.
For the town and date marks see Gans (1992), p. 144.
For the identification of the 1795 tax mark, the V&A is grateful for the advice of J. R. Ter Molen. See also Ter Molen (1994), p. 645.

The identity of the maker and the date of the piece have been interpreted in two different ways because the monogram 'AV' was used by both Adam and later by his son Christian van Vianen. The date-letter 'R' was also used on two occasions by the Utrecht authorities for the years 1612 and 1634. The German scholar and hallmark specialist Marc Rosenberg first identified the 'AV' monogram as the mark of the Utrecht silversmith Adam van Vianen (died ca. 1627) and the date-letter 'R' as that of the year 1612 (Rosenberg: 1911, no. 4822: he noted the other two marks, but stated they were illegible). In his revised and expanded edition of the work (1928, vol. III.iv, no. 7721), he rejected his earlier attribution of the tazza and identified the mark as that of Adam's son, Christiaen van Vianen (died 1667). His reattribution appears to be based on a reinterpretation of the date letter to the year 1634. The attribution to Christiaen is followed by E. Alfred Jones, who declared the tazza 'the only piece of silver which can be said to have been made by van Vianen in England', and dated it to 1635 (Jones (1935), p. 84). However, the Dutch silver expert J. R. Ter Molen recently compared images of these marks with ones on a piece marked for Utrecht in 1610. The similarity of the town marks and the form of the punch used for the date-letters confirm the date-letter on the tazza as 1612 (see correspondence in object folder, Metalwork Section).

The stylistic and iconographic features of the tazza itself also support a dating of 1612. The strapwork and fruit motifs on the stem of the tazza recall late sixteenth century designs (particularly those on a 1594 covered cup, also by Adam), and the figures, dressed in early-sixteenth-century costume, recall the work of the engraver Lucas van Leyden and, in particular, the work of the Utrecht painter Anthonie van Blocklandt (died Utrecht 1583; see: de Jonge (1937), pp. 102-3; Frederiks (1952), I, no. 49 ) pp. 78-9; ter Molen (1984), II, no. 407, p. 80); De Utrechtse edelsmeden Van Vianen (1984), no. 56 (p. 72). The foot of the bowl is almost certainly by Adam as well, and may have been made at a slightly earlier date (de Jonge (1937), p. 102).
Adam van Vianen (born perhaps in Utrecht, 1569; died probably Utrecht, 1627) trained as an engraver but became known for his skill as a silversmith. Nothing is known of his work before 1612, and he remained in, or close to, Utrecht all his life (unlike his brother Paulus, also a silversmith, who was employed at various European courts).
The tazza was originally part of the collection amassed by the politician, statesman and collector Ralph Bernal (1783 - 1854), which had been housed at his home in Eaton Square, London. (For Bernal see Davies [2004]). At Bernal's death, the Society of Arts and John Charles Robinson, one of the curators of the South Kensington Museum (as the V&A was then known) attempted to persuade the British government to buy the whole collection for the Museum, but their campaign was unsuccessful. Bernal's collection was put to auction at Christie's in 1855. The Museum bid successfully for this tazza, paying the sum of £45 10s. The previous history and ownership of the tazza is unknown, although the 1795 Utrecht tax mark, stamped in between the earlier marks, proves the piece was still in a Utrecht collection in the late eighteenth century.

Adam van Vianen and his brother Paulus developed an extraordinarily fluid style of silversmithing which modern British scholars have termed 'auricular', but which in the seventeenth-century Netherlands was known as 'whims and drolleries' ('fratsen en snaeckeryen'). It consists of fantastic, curving forms and figures that make a solid silver vessel appear in a liquid, flowing state. These forms evolved from the so-called 'grotesque' ornament discovered during excavations of the Emperor Nero's palace in 1480s Rome, and emerge in engravings of the late 1590s. The van Vianen brothers, particularly Adam, became renowned among contemporaries for translating this 'auricular' style into striking pieces of silverware.This tazza, however, is good example of Adam's early work and its form and decoration are very much in the tradition of mid-sixteenth-century motifs inspired by the Classical world (such as the acanthus leaf ornament on the underside of the bowl, the baluster forms of the stem or the leaf patterns round the base of the foot). His skill at working figures in extremely shallow relief is evident in the scene in the bowl, where the perspective effects of the architectural setting give the illusion that the figures in the foreground are raised in high relief. Some elements, such as the flowing, flattened faces round the foot, or the curious motifs between the scrolling leaves that frame the central scene in the bowl, foreshadow the fluid forms that would make Adam famous.

This vessel is of a type that has come to be known by the Italian word 'tazza'. The form -- a shallow bowl set on a central stem -- originated in sixteenth-century Venice and tazzas were originally made in Venetian glass. They served as wine glasses, because their wide, flat bowls brought the liquid into as much contact with the air as possible, and thereby allowed wine to breathe. They could also be used to serve small, sugary sweets, biscuits or fruit. Goldsmiths copied the form of the tazza, and by the end of the sixteenth century the bowls and stem were elaborately embossed and chased. (See Gruber (1980), pp. 70-72). The increasingly detailed decoration on these pieces made them less functional: highly-wrought examples would probably have been reserved for display rather than for use.

Masterpiece of the Week.
Many people find that they appreciate a work of art much better in isolation, and their satisfaction is increased when they can judge it on its own merits apart from other objects of the same kind. One important work of art is accordingly selected from a different Department of the Museum each week and withdrawn from its usual position to be exhibited in this recess with a notice describing it in rather more detail than is possible on the ordinary labels. A new Masterpiece is on view every Thursday morning.
The primary purpose of this silver dish was doubtless ornamental, although Dutch pictures not infrequently show dishes of similar form laden with fruit. At any rate the plaque embossed with the Judgment of Solomon shows very little wear after more than three hundred years.
Its maker was a van Vianen, of Utrecht, a member of one of the most eminent of all families of goldsmiths, although very little is actually known about them. On its knop and foot are masks characteristic of the curious fish motifs evolved by the elder Adam van Vianen (d. 1627), which, through the instrumentality of his son Christian, became popular far beyond the borders of Holland. The dish is generally supposed to be the work of Adam himself and to bear the Utrecht date-letter for 1612. The late Dr. Marc Rosenberg came to the conclusion, however, that the date-letter belonged to the next sequence and stood for 1634, and that the piece was therefore the work of Christian, who inherited his father's mark. The general appearance of the piece perhaps favours the earlier date and the authorship of Adam, rather than that of his son, who spent a number of years in this country in the service of Charles I and afterwards Charles II.
The dish was one of the numerous purchases made for the Museum at the celebrated Bernal Sale in 1855, when it fetched £45 10s. Its previous history has not been traced. [1986] 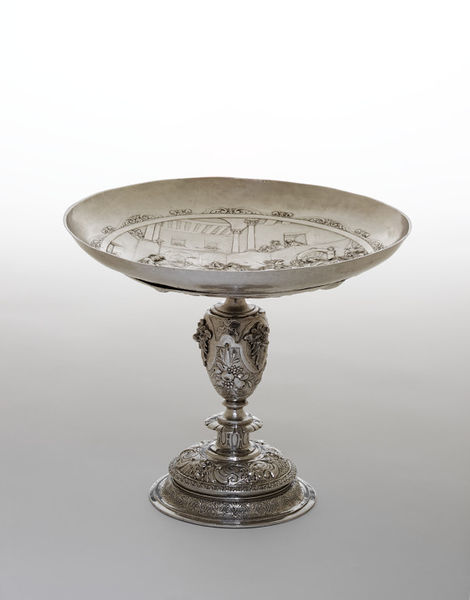