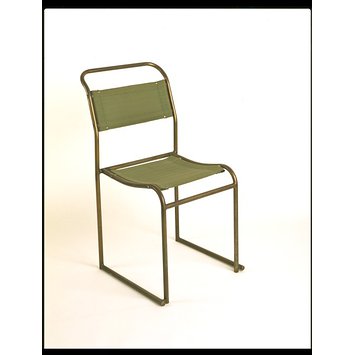 The front and back legs are joined at ground level by straight stretchers. The front legs are connected by a crude weld to the inside of these stretchers, and are connected below the seat level by a straight rail. The legs curve over to join a straight back rail at seat level. The seat, attached by bolts, is of green canvas stretched onto black plastic-covered side members. Both back legs are of one inverted U-shaped piece of tubular steel, and rise above the seat level, at first straight and then angled backwards, forming the chair's back. The green canvas backrest is attached to either side with plastic-covered bolts. The back/seat rail bears on the back a metal label attached with two pins reading: 'BRIT. PATENT NO. 344159 PEL REGD TRADEMARK'.

Given to the V&A by Pel Ltd following its exhibition at the Architectural Association in January – February 1977. On entry to the Museum its condition was noted as 'rather worn altogether', in particular the gold enamelling had already been worn away.

Practical Equipment Ltd. was founded in 1931 by a consortium of steel tube manufacturers impressed by the tubular steel furniture used in the refurbishment of the Strand Palace Hotel, London. The company emulated continental firms such as Thonet and wished to win the British market for metal furniture. This aim was boosted in their first year by winning the commission to furnish the BBC's headquarters at Broadcasting House in Langham Place, London.

Large numbers of Pel's RP6 stacking chair were purchased by the BBC. The RP6 and other Pel chairs (SP3, SP9 etc.) were used to furnish not only Broadcasting House in London, but various other BBC studios all over the world, Manchester and Cape Town being two such examples. RP6 chairs were also used at the De La Warr Pavilion in Bexhill, East Sussex.

Pel had marketed the RP6 from 1932, but were sued by the British agent of Austrian designer, Bruno Pollak, who claimed the design as his own. Only at the end of 1934 was Captain Carew, Managing Director of Pel, able to settle this dispute by purchasing Pollak's patent. From then until 1951, Pel were able to collect a royalty from other manufacturers, such as Cox & Co. and Kingfisher, who manufactured the chair under licence. This was not without legal dispute, for Cox & Co. had continued to manufacture the the chair without permission after Pel had purchased the patent. The dispute was settled out of court, and Cox & Co. had to pay Pel 6d per chair sold; at that time the chair retailed at 13 shillings each. From 1934 Pel were able to expand production plant and personnel for the RP6, which they manufactured in various forms - with or without arms and in a variety of coverings and metal finishes.

STACKING CHAIR RP6
Probably designed by Bruno Pollock (Austrian) about 1931
Made by PEL, Great Britain, after acquisition of the patent in 1934
Steel tubing, originally finished with a metallic enamel; canvas seat and back
W.84-1978

This was the most ubiquitous tubular steel chair made in Britain during the 1930s. It was used extensively at Broadcasting House, the new premises of the BBC. PEL manufactured a wide range of tubular steel furniture, including many unlicenced versions of 1920s German designs.
[] 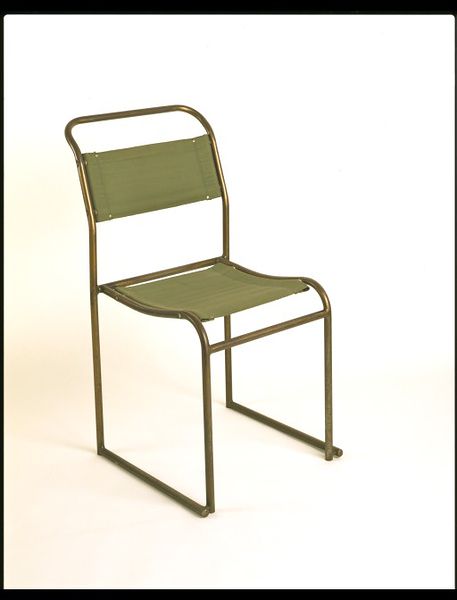