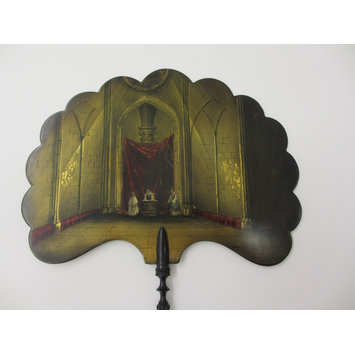 This hand screen was used to shield the face from the warmth of a fire. Often such screens were sold in pairs and when not in use were part of a symmetrical arrangement of ornaments and other decorative objects on a mantelpiece. Like many hand screens painted with exterior or interior views, the subject of the painting does not fit satisfactorily within the shape of the leaf. In this church interior, a subject which indicates the popularity of Gothic themes in Victorian Britain, the shadows on the wall indicate sources of light not visible in the picture. The hand screen is inscribed with the name of Jennens & Bettridge, one of the largest manufacturers of papier-mâché in the West Midlands. The firm, which was in business from 1815 until 1864, produced not only small items such as hand screens, boxes and trays, but also chairs and settees, as well as decorative panels for ship interiors.

The hand screen has a leaf, in the shape of a stylised flower head, and a handle, turned and japanned, which is split at the top to hold the leaf with two metal pins. The leaf is painted with an ecclesiastical interior, possibly a church or cathedral, with stone walls, pillars, and floor. In the centre, a red drapery is hung across an arch, in front of a large column. In front of the drapery stand three priests in vestments, the central figure looking at a large open volume on a pedestal. Along the walls to left and right are low benches concealed under red covers. Above these benches shadows on the walls indicate a source of light not visible on the leaf of the screen. There is a painted inscription, Jennens & Bettridge, on the right hand side of the leaf at the front. The back of the leaf is japanned.

Jennens & Bettridge (designed and made)

Papier-mâché hand-screen, the leaf painted with an ecclesiastical interior and fitted with a turned and gilded handle, made by Jennens & Bettridge. English, 1840-50. 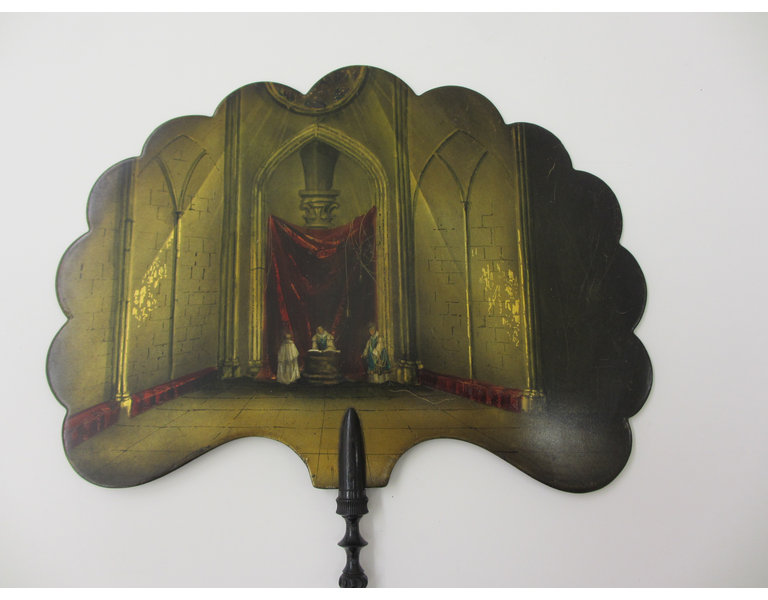