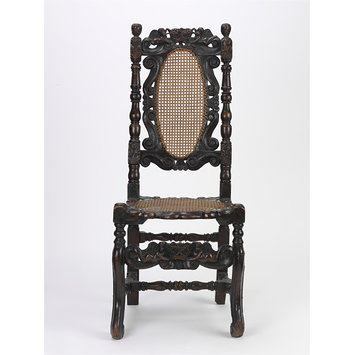 Caned chairs appeared in England soon after the Restoration of King Charles II, and quickly became popular, being cheaper, lighter and less prone to dust and pest than their upholstered equivalents. They were widely recorded in middle-class as well as noble house inventories well into the first half of the eighteenth century. Both the technique and the material (rattan cane or calamus rotang split into long narrow strips) came from Asia. The canes were imported in large quantities by the East India Company to London, where the production of caned furniture was concentrated. Caned chairs were also exported from London in large quantities, so much so that in France they were known as chaises d'anglaise, and in the German states as englische Stühle. They were often used with a light seat cushion.

The back stiles are turned with balusters between rectangular sections, the front faces of these, above the seat, carved with flower sprigs, the front face of each stile cut back on the bottom section to suggest a raked foot. The stiles are topped with finials in the form of human heads, each with a hole at the top which may originally have held a further, smaller, finial, perhaps of a carved feather panache.

The front legs are carved as S-scrolls, with small baluster sections at the top, below rectangular blocks. The stretchers, in H-form, with a single, high back stretcher, are turned with balusters and rings between rectangular sections at the joints. A high front stretcher panel is carved with scrolls and a central crown, supported by cherubs.

The seat is of framed construction, the front and back rails tenoned into the blocks at the top of the front legs and on the back stiles and the inner edges cut back to receive the side rails which must be tenoned into the back and front rails and also the legs and stiles. The joints are clearly visible on the top of the seat frame. The seat is cut with recesses on the top surface to give a framing for an oval cane panel and the seat is supported underneath in the front corners with modern spandrel brackets held by screws.

The caning all appears to be replacement.

Walnut and stained beech, with panels of caning

This and CIRC.408-1911 said to have come from Holyrood Palace. Purchased from Mellier & Co, Albermarle Street, London, a firm of interior decorators who were in business from 1870s to ca. 1930s

Chair of walnut and stained beech, the cresting carved with a crown supported by cherubs; seat and back panel of cane. English, 1670-90 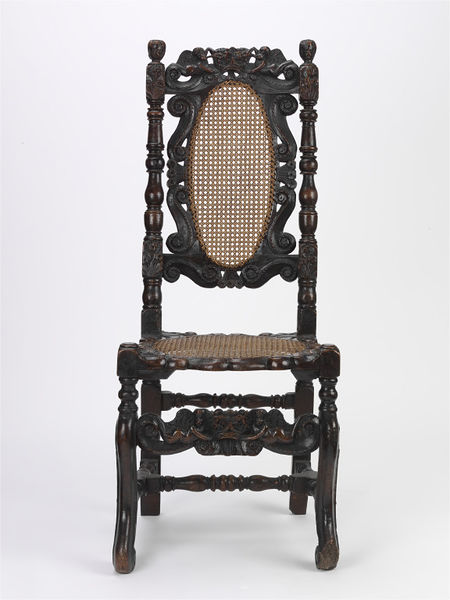