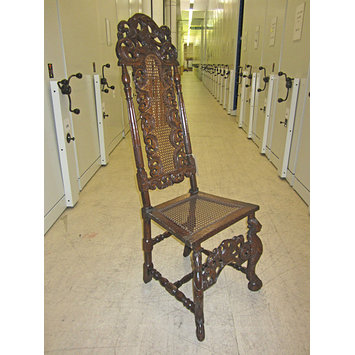 In the late 17th century caned chairs became extremely popular not only among the aristocracy and gentry, but also among merchants and tradesmen, as they were much cheaper than upholstered chairs. From the 1680s onwards enormous quantities were made in London, for export as well as for home consumption. In many parts of northern Europe this form of chair even became known as an 'English chair'. This chair is unusual in showing a fighting cock on the cresting, suggesting that it might have been made for a room with sporting use or even for a cockpit.

When the chair was given to the Museum in 1929, the donor told us that it had at one time belonged to the 19th-century artist Dante Gabriel Rossetti (1828-1882).

A chair of turned and carved beechwood, stained dark, the back and seat with panels of caning. The arched cresting of the chair is carved and pierced with the figure of a fighting cock (showing spur and bell) triumphing over its opponent. A similar figure of a single bird is repeated on the arched, front rail. The front legs are carved as female term figures, ending in narrow clawed feet clutching balls.

Design
The back uprights, which are continuous with the back legs, are turned, with rectangular sections at the joints. The uprights are strongly raked backwards above seat level and show a slight backwards kick at foot level. The turnings above seat height include a section turned as a column showing entasis and fluting (the flutings partly filled). The front face of the blocks at lower back-rail height are carved with flower heads. The lower back-rail is carved and pierced with scrolls of acanthus foliage, as are the two inner upright panels which flank the caned panel between the lower rail and the cresting. The design of the cresting is reflected in the carving and piercing of the deep rail between the front legs. Stretchers in H-form, with an additional, high cross stretcher between the back legs, are baluster-turned, with rectangular sections at the joints. The seat frame is trapezoidal in plan, and is undecorated.

Construction
The uprights, legs, stretchers and inner back frame are joined with mortise and tenon joints. The top of the back uprights are joined with circular tenons into the underside of the cresting, the front legs similarly jointed to the seat frame, in which the back and front rails are tenoned between the side rails. The back corners of the seat frame are set into a recess cut into the back uprights. All joints are pegged. On the back surface of the left (PR) inner frame of the back, trial marks from a curved gouge blade are visible and an area at the top of the frame shows a depression where wood has been torn away in the process of carving.

Alterations and repairs
The central and right (PL) stretchers are replacements, in stained softwood. The back of the front rails is reinforced at either end with small fillets of wood. The underside of the seat panel is reinforced at all four corners with old metal straps, those at the back L-shaped and running down the legs. Evidence of repair is evident on the top surface of the seat at these points. The top surface of the right (PL)rail of the frame shows marks of a toothing plane.

England (possibly, made)
Scandinavia (possibly, made)
Denmark (Possibly. There was a set of chairs with very similar carved crestings and front legs at Rosenborg Castle, Copenhagen,in 2009, with the brand mark of Frederick IV (1671-1730), probably originally for Fredriksborg Castle (see departmental files). Those chairs also feature a cresting carved with a fighting cock. It is uncertain whether those chairs were made in Denmark, or in London for export. The use of the general term 'English chair' in northern Europe, for caned chairs, has led to much confusion. , made)

Given by Mrs Alfred Beesly, Letcombe Bowers, Wantage, in memory of her mother Mrs Charles Hancock of 125 Queen's Gate, London SW7. According to the donor, the chair formerly belonged to Dante Gabriel Rossetti. In a memo from H. Clifford Smith to Oliver Brackett, dated 9 May 1929 (Nominal File MA/1/B940) it was described as an 'uncommon model'. At that time it was considered English, which may explain this. The memo also records that, at the time of acquisition, it was covered with black paint, which has subsequently been removed. Mrs Beesley wanted to present more furniture, all bought from the sale of the belongings of D.G. Rosetti, but other pieces were not deemed good engough 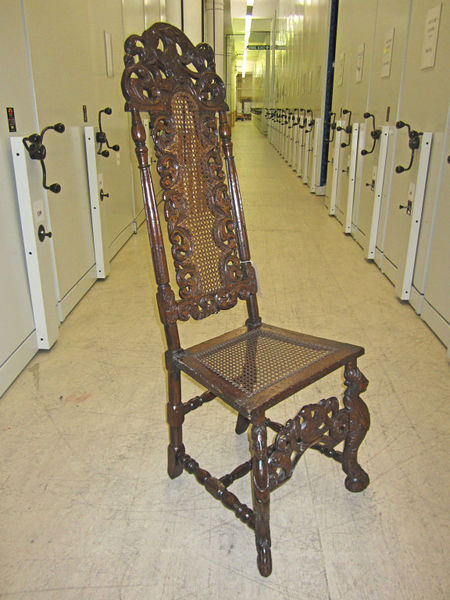