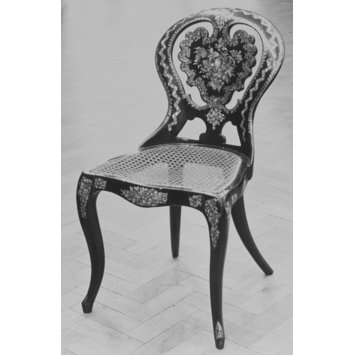 Japanned wood front legs of French cabriole form with pad feet decorated on the front with a gilt leaf. The 'knees' are decorated on either side with a group of pendant flowers, gilt, with a crude mother of pearl inlay; those on the front are larger than those on the sides. The back legs, also of Japanned wood, are round, tapering outward and curving; they are set at a diagonal to the chair seat. The chair rails are all Japanned wood. The front rail is serpentine and decorated with small gilt floral ornament with crude mother of pearl inlay at the sides, near the intersection of the legs. There is another floral ornament, larger but similarly executed, at the centre of the front rail, which has a curved apron. The side rails are also decorated with small floral ornaments, near the intersection with the front legs. These rails curve to meet the back rail, itself curved. The front corners of the frame are decorated on top with gilt foliate ornament. The seat itself is caned.

The back, of papier mâché with fretcut decoration, is fixed to the back of the seat rail but curves around to cover part of the side-rails. From these endpoints it curves upwards at an angle and then, in line with the back of the legs, reverses this upward curve. This reverse curve meets in a typical balloon-back shape. From the top rail thus formed hangs a splat whose edges are cut in a series of wave-like curves. This generally heart-shaped splat rests on a rail interconnecting the back side members; this rail is curved at top and bottom; it rests in turn on a support which connects it to that part of the back which curves around the back seat rail. Both front edges of the balloon back, including its side-members and the top-front edge in the middle of the back rail, are decorated with gilt tendril decoration. The front-centre of the balloon back, and its side-members, is decorated with a zig-zag ornament, formed of diamond-shaped pieces of inlaid papier mâché. 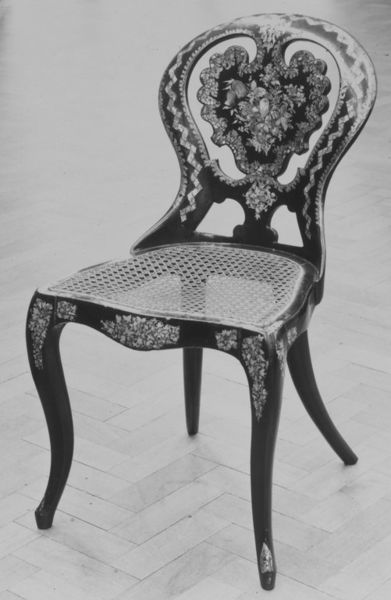