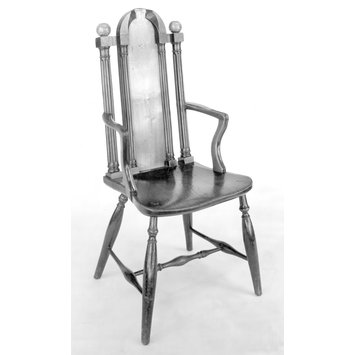 This is a sophisticated version of the traditional Windsor chair. Windsor chairs were very widely used, not only used in cottages and farmhouses, but also in grander houses, where they might be used in the garden, in servants' quarters and for rooms such as libraries or halls, where robust chairs were needed. They were also popular for offices, meeting rooms or barracks.
This chair was certainly made for some specific use and its formality, with a back in the form of a classical Venetian window, might suggest that it was made for a club, perhaps for a lodge of the Freemasons, for the use of officers, while members sat on ordinary Windsor chairs. The chair, which has no ankle turnings, may originally have been taller, and this would be usual in chairs made for the officers of a masonic lodge.
The firm of ‘Webb & Bunce, Windsor and Garden and Rustic Chair Manufactory’ was listed in directories as having premises in the Kings Road, Chelsea and at Hammersmith between 1817 and 1823, succeeding a firm run by Henry Webb in Hammersmith from the 1760s. A William Webb had made such chairs in Newington, near Southwark from about 1760 but any connection between the firm is unproven.

All four legs are uniformly turned, with a long, swelling balusters below turned collars and a concave section just below the seat. The H-form stretchers are plainly turned at the sides, with swelling sections at the joint with the cross stretcher, which id turned with double balusters to each side of the centre. The seat is lightly dished, with an inscribed line outlining the top surface. The back is in the form of a Venetian window, with a central plain panel, arched at the top, flanked by fluted columns and with two outer columns set just outside these. The columns are topped with cubesof wood, linked by a recessed rail between the blocks on either side. The main panle is set above the flanking blocks with thick, arched facings on either side, cut back in the centre, to leave space for the head. The arms are set back from the front of the chair, raised on serpentine supports. The front and top faces are moulded. The whole chair is dark varnished.

Elm and fruitwood, turned and carved

Purchased in June 1973 from Lennox Money Antiques, 99 Pimlico Road, London SW1 (Nominal File MA/1/2485). There is no older history known for this chair. The history of the firm is given in outline under Identification and production (see above). The design of the back is sophisticated and it has been suggested that it may have been made for the use of one of the officers in a masonic lodge. Such chair were usually taller, and sometimes altogether larger, than standard chairs, to emphasize the authority of the sitter. Dr John Stabler, in a letter to Peter Thornton dated 11 January 1975 was the first to suggest that this chair had been cut down, a suggestion that would account for the absence of the decorative ankle turnings usual on such a chair.

A chair with a roughly similar back (but not of Windsor construction) is shown in the first plate of Old Mother Hubbard and her Dog, published in 1819. The illustrations to that may be by Robert Branston (1778-1827), a London wood-engraver - and argue against the idea that this design was particularly sophisticated.

Windsor armchair in elm (seat) and fruitwood, stamped 'WEBB & BUNCE', the back with a solid, arched panel, flanked on each side by two two fluted columns, the outer ones with ball finials above.

The antecedents of Webb and Bunce were the workshops of Henry Webb in Hammersmith (from 1760, possibly from the 1750s, or even earlier if another generation was involved) and (from 1793) by his daughter Martha. From 1804 Martha was working in partnernship with William Matlock Bunce and this business continued until 1832 (Dictionary of English Furniture Makers 1660-1840 (1986), pp. 953-54). It is possible that Bunce dealt with financial matters, while Martha continued to direct the workshops. On a hand bill with a manuscript date of1808 the new partnership claimed that the business had been in trade 'upwards of seventy years' and that the products had been 'Sanctioned by their Majesties, the Prince of Wales, the Dukes of Clarence, Cumberland, Sussex and Cambridge'. Products stocked included 'Cove, seats and Portable Chaises, Rustic Hermitages, Chairs, Table, Bridges, Gates, Windsor Chairs for Kitchen, Studies etc., Camp stools, Chairs, Grecian and German Sofas, Chairs, Stools, Gothic Setees, Chairs etc, Chinese Seats, Pavilions, Awnings, Bath chairs, dog houses, palling etc'. In December 1811 their insurance cover amounted to £1300, indicating a large manufactory, said to be on the 'Corner of Webb's Lane, Hammersmith' (today part of Dalling Road, running north from King Street). The hand bill is in the Banks Collection of trade cards at the British Museum (Museum no. D,2.1503, Trade card Banks 132.123). Directories of the period show that they also had premises in the Kings Road, Chelsea. Martha Webb died in 1832, but Bunce kept the business going (moving the workshops to Dorcas building, Hammersmith) until his death in 1832. 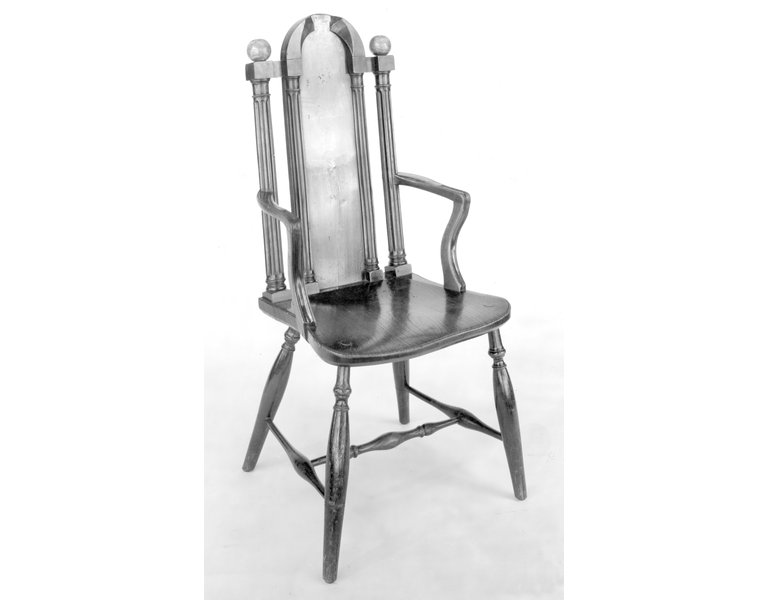