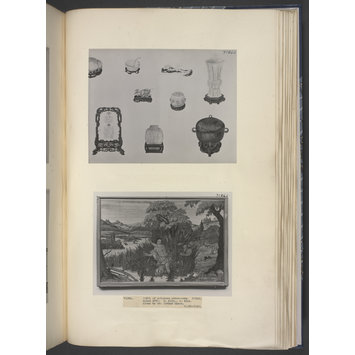 Straw marquetry was a particularly delicate decorative technique, made from lengths of straw that were coloured, split and then glued down onto a base to create pictures or ornament. This box was signed by CFV Hering, in London, in 1732. He was from a family from Lübeck, in North Germany, which specialised in producing straw marquetry, and is known to have worked in Leiden in 1730 and 1731, and in London in 1732.

Panel, decorated in coloured straw marquetry. The scene shows the mythical scene of Pan and Syrinx in the bullrushes with mountains in the distance. Syrinx, with drapery, is shown against bullrushes, out of which Pan peers, to the right. In the distance to the left is a lake with promontories carrying towered buildings (possibly churches), with mountains behind. To the right of a central tree is a wooded area where a stag browses, beneath a hill topped by a Renaissance fortress. The edge of the panel is bound with a narrow border of paper strip (passe partout).

CFV Hering
Name of maker, cut into straw work to left on lower edge. On the inscription the V and the H are conjoined

Leijden 1730
Place and date of manufacture. Cut into the straw work to the right of the lower edge. Leijden was an alternate spelling for Leiden, in the the Netherlands.

The Roman poet Ovid, in book 1 of the Metamorphoses, tells how the satyr Pan pursued the wood-nymph Syrinx. To protect her virtue she ran until she reached a river, where she begged the nymphs of the stream to transform her. Just as Pan was about to embrace her, she was turned into rushes or reeds. Pan was enchanted by the sound of the wind in the reeds, believing it to be the sad voice of his beloved Syrinx. He made a set of pipes from the reeds to that he could have her with him always.

According to Andrew Renton (see refs.), straw work is made from barley, oak or wheat straw, although it is impossible to distinguish between these without microscopic examination. Originally these pieces would have been highly coloured but they have faded. The straw would have been bleached in sulpher vapour, then soaked or boiled in an alum solution with different dyestuffs. It would then have been split and flattened and glued onto paper (sometimes three layers glued together). The sheets could then be cut with a knife, much as veneers are cut for marquetry, and applied to the panels or boxes, made of oak or pine. On the pieces made by the three makers with the name of Hering (see refs.) there is little repetition of motifs, so it is likely that each marquetry motif was cut individually, not with severy layers of straw/paper in a stack, as might have been done for veneers of wood or turtle shell or brass.

Andrew Renton lists 9 pieces signed by C.F.V. Hering, including the box in the V&A (W.42-1978); an oval box in Luton Museum and Art Gallery, inv. L/84/46; another, inv. no. L/85/46; two oval boxes, present whereabouts unknown; a card-counter set in the Historisches Museum, Hannover, inv. no. VM 35295; and two others in private collections. He also lists 4 pieces that are attributed to this maker: a card-counter set, undated, in the National Museums and Galleries on Merseyside, Lady Lever Art Gallery, inv. no. LL9212; another in a private French collection; a box from a card-counter set, current whereabouts unknown; and three tea caddies in the S.Jon Gerstenfeld Collection, USA.

This panel was given to the Museum by Mr Arthur Hurst, a retired engineer for the N.E. Railway, who also bequeathed ceramics and silver. The acquisition papers (RF 19/5641, on Nominal File (MA/1/H3456) records the gift but with no additional information or earlier history. At the time of acquisition, the date was misread as 1530 but that was corrected by the time that the piece was written into the Departmental Acquisition Book.

Panel of straw-work, showing Syrinx in the reeds by the river, pursued by Pan. Signed 'C.F.V Hering, Leijden, 1730' and inscribed above 'Syrinx in arundinem et Pan. Ovid, Metam. liber j' 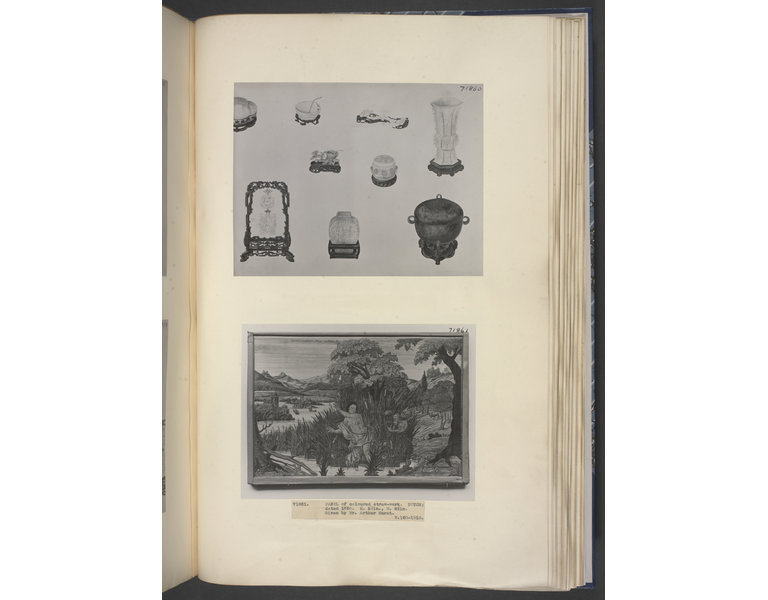