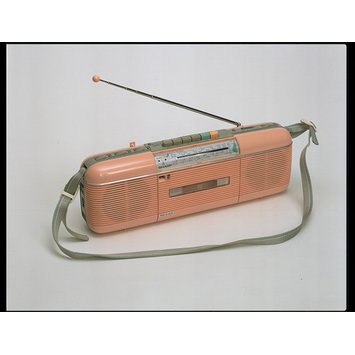 The Sharp QT series went against the prevailing 1980s predilection for chrome and matt black 'high-tech' designs for audio systems, the taste for which had developed as radio components became smaller, lighter and less mechanical-looking. The wide, 'streamlined' speaker grilles, range of soft colour tones and single-piece moulded plastic shell recalls an earlier period of radio design, appealing to consumers' sense of nostalgia.

Given to the V&A in 1992 by Dr. Gillian Naylor, former Director of the History Design Course at the Royal College of Art [93/181].

After the war, domestic radios became smaller and lighter, incorporating wartime technologies such as miniature valves and polystyrene, and later transistors and printed circuit boards. As the components became smaller and lighter, subsequent generations of radios have often been often incorporated as a single function of more complex audio systems.

Sharp are a Japanese electronics company, founded in 1912. They take their name from the first product they manufactured: the ‘Ever-Sharp’ mechanical pencil. They began designing radios in 1925, following their relocation to Osaka after the Great Kanto Earthquake in 1923.

SHARP PORTABLE STEREO RADIO AND CASSETTE PLAYER MODEL QT 50E (P)
Designed and made by the Sharp Corporation, Japan, 1986
Polystyrene case and synthetic fabric strap
Given by Gillian Naylor
W.13-1992
Sharps's QT range of 'retro' style coloured radios was inspired by 1940s and '50s models. They stood in opposition to the many chrome and matt black 'high tech' models then available. Although designed for the Japanese youth market, their popularity abroad prompted others to reconsider their approach to case styling.
[] 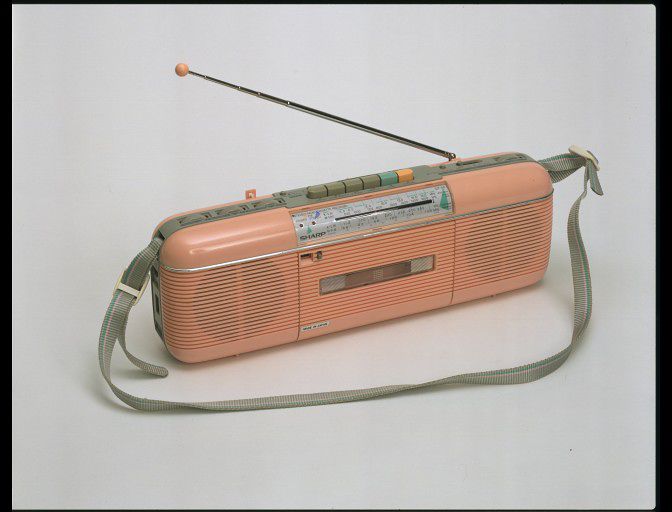