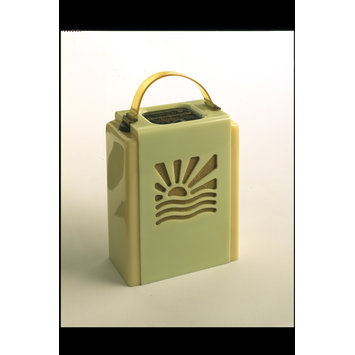 Pye Ltd. were a leading British manufacturer of portable radio sets after the end of the Second World War. The famous 'rising sun' motif the company used to cover their radios' speaker grilles had been in use since the late 1920s, usually with thin clouds over some of the sun's rays. However, the appearance of the cloudless symbol on this attractive portable set of 1948 caused controversy. Consumers noted its resemblance to the national flag of Japan, a country that Britain had been at war with only three years previously. 800 from the original production run of 1000 sets were not sold. Pye, realising their poor-timing, recalled the remainder from stockists and allegedly burned the entire batch at their factory in Chesterton, Cambridge. The Pye model M78F was the last Pye product to feature the rising sun design.

Four valve battery-powered portable radio, made from acrylic coloured in mint green and cream. At the centre-front is a cut-out motif of a stylised sun rising over water, the speaker beneath is covered with woven fabric. On the top of the set is the tuning scale, made from a black plastic. Either side of the scale are black, toothed wheels for tuning and volume control. Spanning the top is a clear (now yellowed) PVC handle.

Pye Ltd. was founded in Cambridge in 1896 by William George Pye, an employee of the Cavendish Laboratory - the physics department of the University of Cambridge. In its early days, the company specialised in making optical scientific equipment, this expertise being exploited during the First World War when Pye were contracted to manufacture gun sights. Pye also manufactured thermionic valves during the war years, placing them in a favourable market position once peace dawned. Domestic wireless receivers begun to be manufactured shortly after the war’s end. The company expanded significantly after it was acquired in 1928 by Charles Orr Stanley, who directed Pye to begin producing its first television sets. Pye would later make a significant contribution to the Second World War effort, producing radar receivers. Post-war, Pye became the leading British manufacturer of portable radio receivers.

Pye's well-known sunrise grille motif appears on this model without the clouds. Many people objected strongly to the resulting resemblance to the Japanese national flag and Pye withdrew the set. It is said that 800 of the 1,000 made were unsold and were destroyed on their return to the factory.
[] 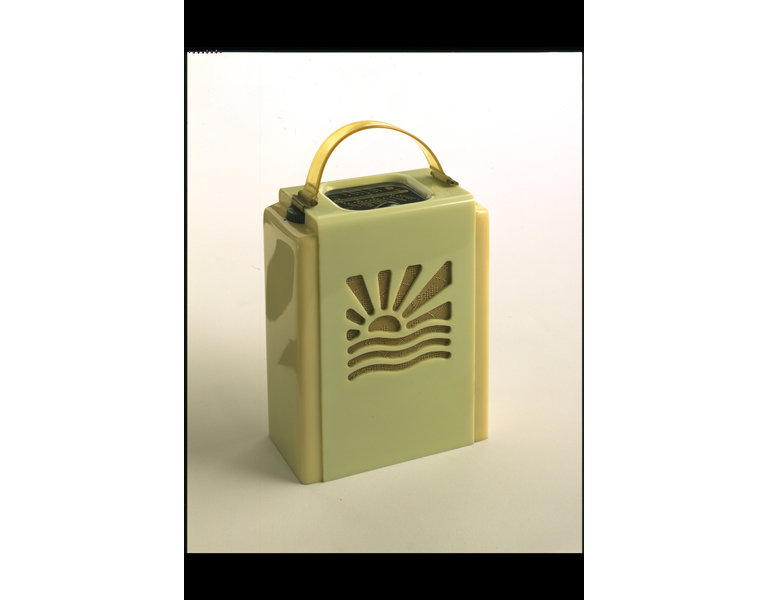