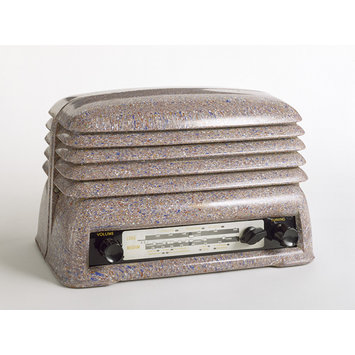 The K.B. model BM20, 'the little set with big ideas', was marketed in the late-1940s as a second domestic radio set. It is identical front and back, the case formed from two identical Bakelite halves bolted together, meaning it could placed in the centre of a room as the focal point for home entertainment. Early speckled (like this example) and brightly coloured versions of this model are rare. They did not sell particularly well, most were recalled from shops and spray-painted white to better satisfy British consumers' somewhat conservative taste.

Table radio set of speckled Bakelite. Broadly rectangular when viewed in elevation, the case is formed from two identical halves, bolted together at either side. The set is encircled by five moulded horizontal ridges, acting as a speaker grille. Toward the base on the face of the set, the tuning dial, volume and waveband switch are located together on a plastic panel, recessed into the chassis. Located in the same place on the back of the set is a blank panel, from which issues the power cord. There is a sticker in the centre of the panel, showing the serial number etc.

Kolster-Brandes Ltd was an American-owned manufacturer of radio and television sets, founded in the 1920s and based in Foots Cray, Kent. In the 1930s, K.B. won an exclusive contract to provide the communications equipment used on the RMS Queen Mary ocean liner. The company produced mid-range electronic goods until at least the 1960s.

This is an unusual example of a coloured Bakelite case. Ekco had produced some coloured sets using the variant urea-formaldehyde formula but no Bakelite radio case could successfully compete with either the colourful, translucent Catalin cases from the U.S.A. or with glossy surfaces of portables made from newer plastics. 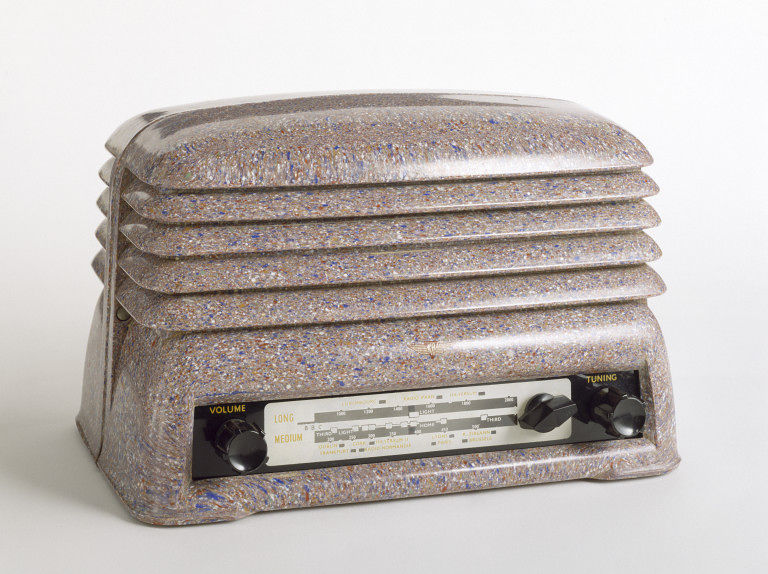