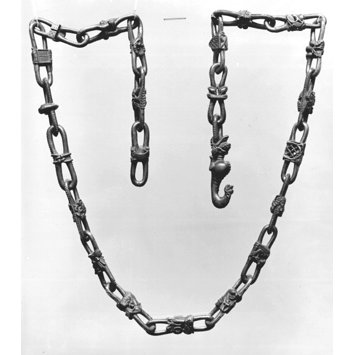 This chain is carved from a single length of wood. The 23 links are decorated with bosses depicting subjects from hunting and courtly love, with a hook in the form of a dragon. Also included are the arms of Dreux, as Dukes of Brittany which helped support the idea that the girdle had been made in the fourteenth-century. Although similar medieval girdles (usually of metal) are known, it is now thought - on account of its implausibly good condition and Romantic character - that this piece was made in the 19th century, possibly in France, and probably as a fake, with the coat of arms used to add a sense of authenticity.

Similar virtuoso wooden chains were made in the 18th and 19th centuries to hold knitting sheaths, and it is possible that such sheath chains inspired this piece.

Girdle or belt of thornwood carved in the form of a chain of twenty-three links decorated on the front and back with the following subjects:

Bought for £100 from Owen Evan-Thomas Ltd., 20 Dover Street, London W1 (RF 5332/38), on entry to the Museum its condition was noted as 'rubbed, slightly chipped'. This object was originally thought to have been made in the 14th century.

llse Fingerlein"Guertel des hohen uncl spaeten Mittelalters" (Munich,1971)
Dates the belt to the early 15th century. She notes that it is unusual in that it is carved of wood - rather than being made from metal-but suggests that there may have been more wooden jewellery than we think. She bases the date on a depiction of very similarly-shaped chain links (though no mention is made of carving) in a sketch-book dating to the middle ages ("Das Braunschweiger Skizzenbuch eines mittelalterlichen Malers", Prague, 1897, sketches 22, 24 & 27) and draws a direct comparison with the V&A chain.The open clasp, featuring a curved dragon, is apparently similar to others of the type and period, and she concludes that the "soft, rounded depiction of the animals suggests that it was made around 1400" (Apparently, there is a ring in the Germanisches Nationalmuseum in Nuremberg which features animals of similar character). She suggests that the shield of the Dukes of Dreux of Brittany, especially the depiction of who is thought to be John V, Duke of Brittany (died 1389), corroborates such an attribution. She believes that it was indeed worn and did not just serve as a wooden model (e.g. for a metal chain); it may have been draped around the shoulders or around the waist.

Twenty-three links carved with the arms of Dreux, as Dukes of Brittany (probably for Duke John V, d. 1399) and scenes of boar, stag, hare, and squirrel hunting and of chess, backgammon, fishing and other sports and pastimes. The ladies of the period wore such belts or girdles low on hips, fastened by hooking one end into one of the links so that the other end hung down in front. Such belts could also be of metal, leather or silk, and were sometimes set with jewels. 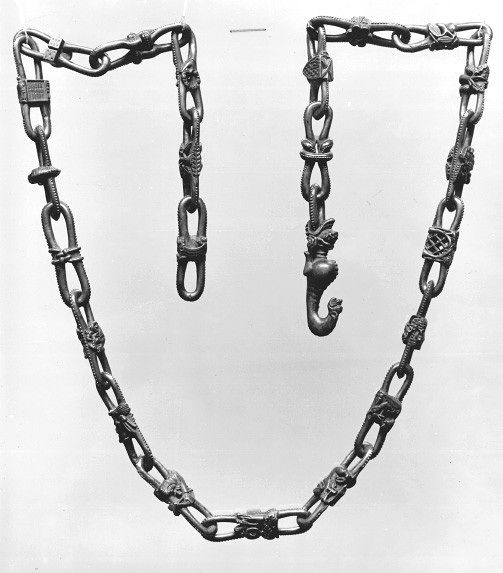