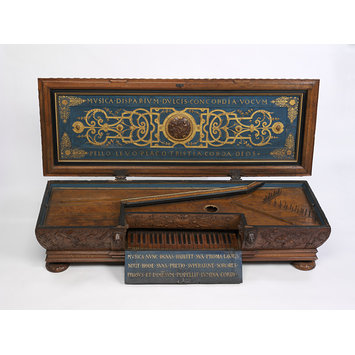 This unsigned but lavishly carved virginal was made in 1568, most likely in Flanders, for Wilhelm, Duke of Cleves (1516-1592). It is inscribed with Latin proverbs in praise of music and the soundboard is painted with flowers, a characteristic of keyboard instruments made in Antwerp during the 16th and 17th centuries. The case is carved in the exuberant Northern European Renaissance style, which owed more to grotesque than strictly classical ornament. This virginal was exhibited at the Exposition national belge in Brussels in 1880, and was acquired by this museum in 1896.

"The case is of walnut, in sarcophagus form resting on four small turned and carved feet, possibly replacements at a later date. .... The case is carved [on the outside] in relief with trophies of arms and of musical instruments in a decidedly Italinate manner. In the centre [on the inside] above the keyboard.there is a cartouche on which is carved a nude figure holding a viola da gamba. Above the keyboard and on the sides of the lid are fine strapwork compositions. The one on the [outside of the] lid frames the arms of William, Duke of Cleves, Berg and Jülich (1516-1592) .... The interior of the lid is decorated on a blue ground with gold strapwork ... In the centre is a medallion depicting Orpheus charming the wild beasts. The soundboard, presumably of spruce, is painted in gouache with flopwers in the earliest identifiable painting style used on Flemish harpsichords .... the rose, now unfortunately missing, measured about 70 mm in diameter." - Howard Schott: Catalogue of Musical Instruments in the Victoria and Albert Museum - Part I: Keyboard instruments. (London, 1998), pp. 26-27.

Carved walnut case; painted and gilded inside of the lid; painted sprunce soundboard.

MVSICA DISPARIVM DULCIS CONCORDIA and PELLO LEVO PLACO TRISTIA CORDA DEOS
'Music the seet harmony of unequal [notes]' and 'I drive, I lighten I placate the sad strings and the Gods'.
Inscrption on the inside of the lid.

LAUDATE DOMINUM IN CHORDIS ET IN ORGANO.
Praise the Lord with the Strings and the Organ
Written along the front of the base of the instrument.

LAUS DEO
Praise [be] to God
Along the bse on the left and right side of the instrument.

OMNIS SPIRITVS LAVDET DOMINVS [sic] 1568
Let every spirit praise the Lord.
Written along the base of the isntrument at the back.

These virginals were displayed at the Exposition Nationale Belge in 1880, when it belonged to Antonin Terme, a collector based in Liège. He sold it to this museum for £793 - 9 - 11d in 1896.

VIRGINAL
Flemish, dated 1568
Walnut with carved, painted and gilt decoration, with Latin inscriptions in praise of Music. The instrument much altered.
On the lid of the case are the arms of William, Duke of Cleves, Berg and Julich (1516-1592). The carving is derived in part from prints by Jakob Floris, Veelderhande Cierlycke compertementen, Antwerp 1564 (see photograph). The case of this virginal is derived from Italian chests; when playing it would have been set on a table. [] 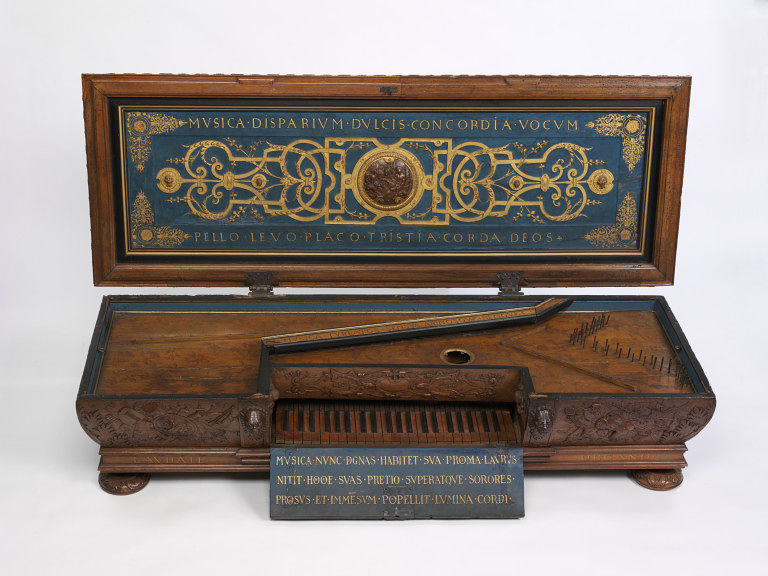